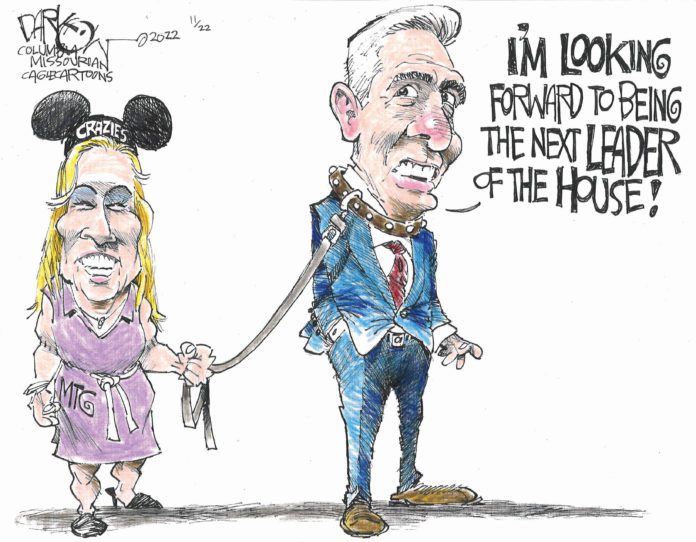 Well, well. Future House Speaker Kevin McCarthy, R-CA, has announced the first thing he is going to do when he assumes the post is to have his Elephant nimrods read the United States Constitution on the House floor.

What he ought to do is to have someone read it to Donald Trump, who just yesterday announced he wants to suspend it.

And to top that useless plan off, the next thing McCarthy promises to do is to repeal the requirement for military personnel to take the COVID shots. Before some of you “patriots” write me and say that’s a great idea, think about this: Your sons and daughters are often in very close quarters … barracks, for example, or in the back of a C-130 or other aircraft for many hours as they fly to various hotspots around the world.

Such sharing of tight spaces will lead to even more spread of COVID, more deaths – over one million Americans have died from the pandemic – and certainly thousands more daily infections. Currently about 37,000 new cases are revealed each day and about 300-plus Americans die daily from it.

We went through this same rhetoric years ago when anthrax was a great danger and some in the active, reserve and guard units thought they shouldn’t have to be inoculated back then, either. I was in the Oklahoma National Guard and, thank goodness, our commander, Maj. Gen. Steven Cortwright, put an end to that foolishness and ordered the shots to be given.

Really, are these two stunts all McCarthy can think to do as his first two policies when and if he assumes the speakership? If they are, he may end up having the shortest-lived speakership in history.

I will never understand politicians who spend their entire lives reaching for the brass ring, achieve it and then spend their time on irrelevant, unimportant or divisive issues.

Monkey see, monkey do, I guess.