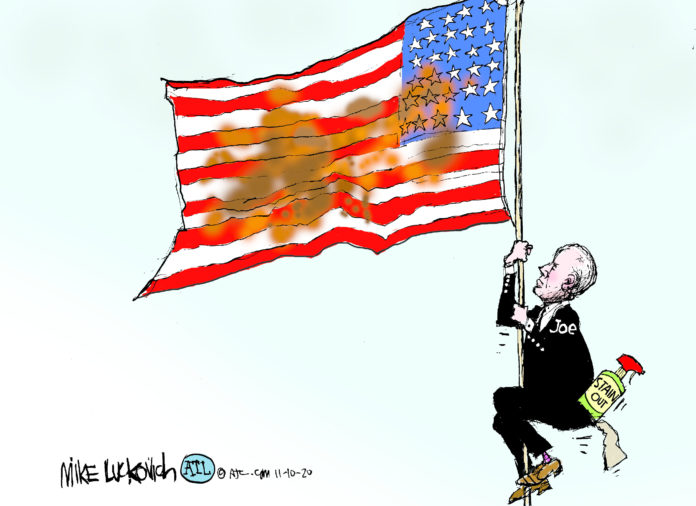 Decency is returning to the White House, but here is what President-elect Biden is up against:

One of my many cousins posted “Impeach Biden” on Facebook. The man hasn’t even been sworn in yet.

The mother of a former student posted “Racism was almost dead in America until these two.” Above photos of the Obamas.

Supporters of the Whiner-in-Chief suggest that this election was stolen from him, despite no evidence and despite Republican wins on the same ballot. You’d think if Democrats were going to cheat, they would at least take the Senate.

The same people who can’t accept the election results are cheering on the elimination of ObamaCare, although ironically, some want to keep the ACA, not realizing they are one and the same. If the Supreme Court strikes down the ACA, millions of Americans will lose health insurance, and people with pre-existing conditions – Democrats, Republicans, and Independents – will lose protections.

Another great irony is conservative belief in law and order mirrored by their admiration of a man who won’t be constrained by laws.

The problem seems to be emotion over logic. What do we do to combat that?

And what emotion? Fear!

They are afraid of immigrants, restored relationships with foreign leaders who aren’t dictators, antifascists, and people of color in the White House. I mean, it’s called the White House for a reason, right?

Maybe that’s not fair, but racism and fear seem to be strolling hand in hand here.

Bringing this country together is going to require some hard conversations and some common goals. Yes, Democrats will have to reach across the aisle, but that won’t matter if McConnell continues to deny meaningful legislation from even getting a vote in the Senate.

It won’t matter if half of the voting public believes every conspiracy theory they see in their alternate universe.

There needs to be a Truth Intervention. It won’t be easy. I don’t even know where to begin when one person’s lie is another person’s hard-held belief.

How do we get back to shared truths? The answer to that might well save democracy in this country.