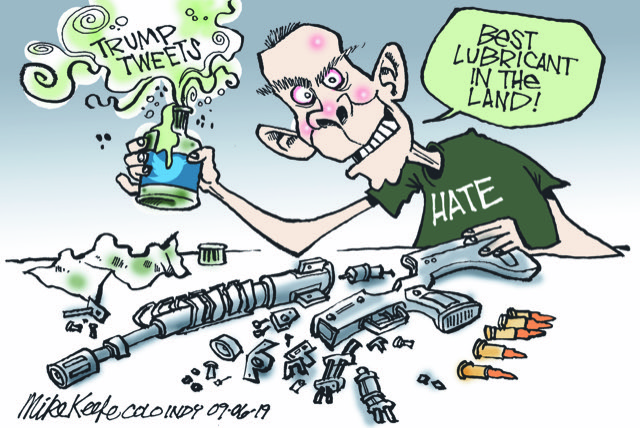 No, Mr. President, Not Both Sides

After the massacres in Dayton, OH, and El Paso, TX, we watched Donald Trump, the president who spends most of his time on social media to divide and polarize America, speak up for national unity and an end to “destructive partisanship.” From the White House he issued a statement condemning white supremacy and bigotry as “evil.” And even if his voice droned as he read the teleprompter, people wanted to believe he meant what he said.

He could hardly wait to tear off that mask. Within two days, he showed us again how unsuited he is in character and temperament to be president.

Nobody should have expected Trump to take responsibility for his own role in encouraging the reactionary terror that is sweeping across the country, leaving behind bullet-riddled bodies and mourning cities. Taking responsibility isn’t what Trump does. Instead, he followed his predictable pattern of defense by distraction. He wants us to focus on anything except the climate of fear and rancor he has conjured for the past four years, first as candidate and now as president.

What ought to trouble Trump or any decent public official is that the El Paso shooter slaughtered almost two dozen innocent people in a Walmart store and justified his crime with an alleged screed that echoed the toxic themes of the Trump presidency and the modern Republican Party. Like the many white supremacist killers who preceded him, this thug made sure that we would know exactly why he perpetrated his atrocity, that he targeted people he believed to be of Hispanic heritage because he hates brown-skinned immigrants. The four-page online rant authorities believe he published expressed his white nationalist and anti-immigrant bigotry and said that he had traveled 10 hours to shoot as many Mexicans as he could.

When reporters asked Trump whether he regrets his unrelenting demonization of immigrants, with so many innocent victims lying dead in Texas, his response was almost comically villainous. “No,” said the president, “I don’t think my rhetoric has at all. I think my rhetoric is very – it brings people together.”

What Trump wants to promote is the right-wing mythology swiftly constructed around the Dayton shooter, a different kind of thug who reportedly displayed symptoms of severe mental illness and talked for years about his violent misogynist fantasies. Posts on his apparent social media accounts show that he identified as a “leftist” and an “atheist” and had retweeted praise for Bernie Sanders, Elizabeth Warren and antifa.

Somehow those shreds of political speech are supposed to demonstrate equivalence between one disturbed left-wing gunman and the legion of white supremacist murderers who have perpetrated scores of murders from Poway to Pittsburgh to Charleston to Christchurch. As an infamous man once said, “You had some very fine people on both sides.”

According to the FBI, the motives of the Dayton shooter remain unclear [although the bureau says he was exploring undefined “violent ideologies”]. The brief, terrible shooting spree that killed his own sister and several patrons of a local bar, most of whom were black, indicated no political motivation of any kind. He was simply very ill, as a former girlfriend, high school classmates and neighbors recalled, and it is tragic that he got guns and ammunition instead of psychiatric treatment.

We are bereft of a leader who upholds American values at a time when we most desperately need one. So we must see for ourselves what confronts our country and the world: a netherworld of fascist insurrection sustained on the internet, recruiting sick and disaffected men to kill with military-style weapons that are far too easily acquired – and a president who spews the same poison.

It is a nightmare that will never be over until we elect a new leader with the will and courage to extirpate this homegrown terrorism.