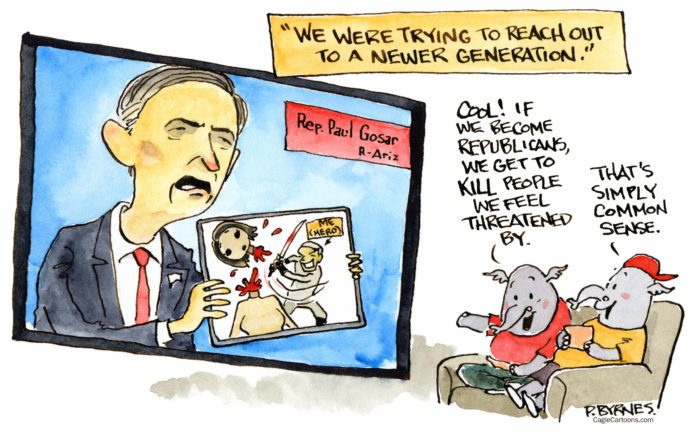 No Sense Of Decency

From their embrace of minority voting restrictions, misogyny, racism and isolationism, one might think today’s GOPQ wanted a return to the 1950s. But that Q element that they have added to their identity negates that idea.

QAnon conspiracy theories share much of the same motivation of the McCarthy Era. But it embodies the vileness of our previous president way past the tenor of the relatively tame ‘50s.

Sen. Joseph McCarthy’s publicity-fueled assault on American values came to an end on one day.

As recorded in the Senate archives, after getting crosswise with the Army over another issue, “At a session on June 9, 1954, McCarthy charged that one of [Joseph] Welch’s attorneys had ties to a Communist organization. As an amazed television audience looked on, Welch responded with the immortal lines that ultimately ended McCarthy’s career: ‘Until this moment, senator, I think I never really gauged your cruelty or your recklessness.’ When McCarthy tried to continue his attack, Welch angrily interrupted, ‘Let us not assassinate this lad further, senator. You have done enough. Have you no sense of decency?’

Yes, at that time – those glorious ‘50s – a sense of decency still meant something to Republicans.

Not in today’s Republican Party. One of their House colleagues can post an animated video of himself murdering Rep. Alexandra Ocasio-Cortez with samurai sword before turning toward President Joe Biden, and only two Republicans vote to censure Arizona Rep. Paul Gosar. None from Oklahoma.

And just minutes later, Gosar posted that video again. And while he was stripped of committee assignments, House minority leader Rep. Kevin McCarthy was already promising even better assignments. And, of course, of course, failed coup leader Donald Trump announced his endorsement for Gosar’s re-election.

Fox Business host Liz Claman asked, “Have we lost all decorum? Paul Gosar is a sitting congressman who put up basically the meme version of a snuff film on his Instagram and Twitter accounts.”

“Have you no sense of decency?”

Well, lately Republicans have adopted a “Let’s go Brandon” chant – including on the House floor – that I cannot translate for a family newspaper. According Huffington Post, Dan Rather “accused conservatives of using the veiled obscenity to further ‘the vulgar dehumanization of our entire democratic – small d – experiment.’”

The twice-impeached former president – always on the grift – has added to his merchandise line what Rather characterized as “raw vulgarity, or the meekest fig leaf of innuendo.”

I guess that is mild to Trump re-tweeting a speech that declared, “The only good Democrat is a dead Democrat.”

Then, too, we have PoliticusUSA reporting on Florida Sen. Marco Rubio calling the president’s nominee to head the Office of the Comptroller of the Currency a “communist.”

Saule Omarova “was born in Kazakhstan when it was still part of the Soviet Union and has been a United States citizen since 2005. She teaches law at Cornell University and served in the Treasury Department under former President George W. Bush.”

Rittenhouse’s own lawyer, Mark Richards, told Insider he thought it “disgusting” that Republicans were using this case to raise money.

Gosar vies daily with Rep. Lauren Boebert and Rep. Marjorie Taylor Greene to excite the GOPQ’s Trumpista fascist base. So, not to be outdone, he suggested Rittenhouse should get a congressional medal of honor.

In mid-November, Denver’s KUSA newsman Kyle Clark cited Boebert for “the cruel, false and bigoted things she says for attention and fundraising.”

And, of course, pals of the coup-plotting ex-president are in lockstep [and goose step] with his sense of indecency.

The outrage of the privileged class demands outrageous fuel to keep the fires of [false] victimhood raging.

With neither decency nor decorum, Republicans stoke the flames.