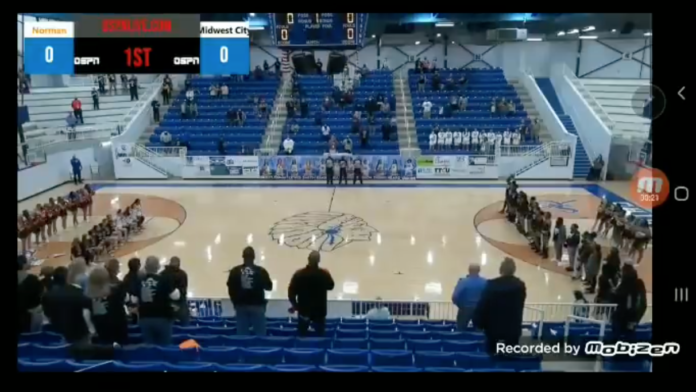 Not So Below The Surface This Time

As some of us scanned social media outlets, early morning TV news, radio reports or even the front page of The Oklahoman newspaper on Saturday, we were confronted again with an example of quintessential racial bigotry, this time the mindless mutterings of a sports announcer honestly revealing his sickening opinion about high school girls kneeling at a basketball game in Sapulpa.

Of course, the only difference between this particular jerk, a fellow named Matt Rowan, owner and operator of the streaming service OSPN covering the game, and thousands of similar non-thinking Okie rednecks, is he got caught on tape during the playing of the national anthem.

Being the patriot I’m sure he claims to be, perhaps while standing with his hand over his heart, Rowan fired off a few of the most destructive and painful epithets ever uttered in America … and he actually seemed proud of them. Even declared that he hoped his main target, black young ladies on the team from Norman, would suffer not the thrill of victory but the agony of defeat. As if it matters much now, the Lady Tigers not only won that game by 13 points, but went on to win the state championship. Soon enough, though, that will only be a footnote to the much larger, loose lipped damage done by Mr. Rowan.

Matt, apparently even more technologically challenged than yours truly, blabbed his blasphemy into a hot mic and now he’s in both a hot seat and even hotter water. Well, perhaps not in a hot seat to cover this year’s tournament games since most everybody that has the authority to remove him from his sideline perch did so.

Like most all bigots when exposed, either by “finding God” or figuring out where the on/off switch for the microphone is, this broadcasting hot jock probably has no future in that business but he certainly had a ready excuse, not reason, why he uttered such ignorance: He is diabetic, his sugar count spiked, causing his mind to focus not on the game at hand or even Sunday’s NCAA Big Dance selections but rather his learned and retained racism.

I can identify with poor old Matt myself. You see Jack Daniels, one of my favorite but now banned libations, is full of sugar, I’m told, and it always made me – actually forced me – to say the damnedest things after a few shots of it which, if I could remember any of them, I surely would regret.

Sadly, one other not so funny thing happened as Mr. Rowan came out of his sugar induced stupor. He blamed someone else for the commentary but then the dratted tape appeared, making the evidence overwhelming and leaving our poor shock jock bubbling in his own, self-created hot mess.

However, since Matt the Mouth is apparently a good talker [otherwise why would he be on a broadcast] and is a white male with now revealed racist tendencies; and has a pastor for a father and Rowan himself is a former youth pastor; considering all that, he has the perfect credentials for some jobs that will open up in about a year.

In 2022 scores of well paying positions in the Oklahoma Legislature will be on the ballot and the winners will mostly be other white males of a certain age, political registration and orientation.

Now before some of you jump on poor old liberal me, I only offer this admittedly broad brush concerning the Legislature because of their voting records – especially this year. One example may suffice. Every white, male, Republican lawmaker this year voted yes for a bill that says if a driver, regardless of race, runs over a protestor[s] marching on the highways and byways in our state, that driver cannot be charged civilly or criminally for such action. The bill was a direct response in the Black Lives Matter march in Tulsa last year and, of course, participants on foot were overwhelmingly black. The vote on the legislation came late at night and no other demographic group in the Legislature voted with such unanimity for it.

Coincidence? Not on your life any more than sugar and diabetes caused Matt to speak what he really believed into that truth-revealing microphone.