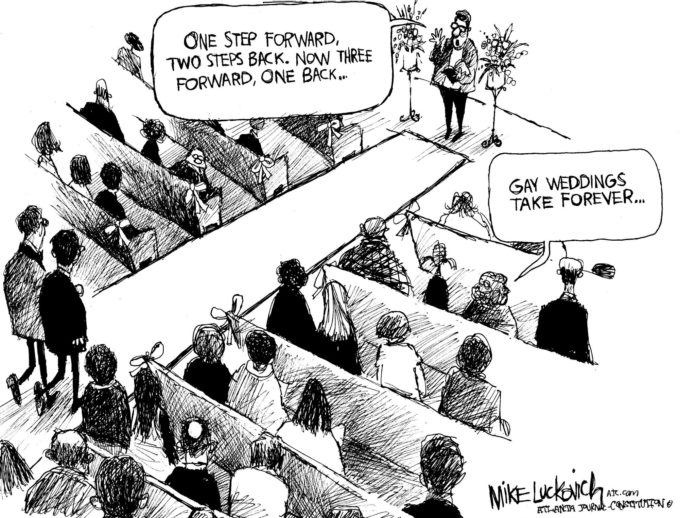 That Oval Office must have one hell of a communications system because George Bu$h talked directly to “God” as well.

As Pulitzer Prize winning columnist Leonard Pitts has written, “Not that doing the right thing should be a matter of public opinion, but support for marriage equality is climbing toward the majority. Voices of fear are being shouted down, winds of change are blowing, and we approach a crossroads of possibility where the need for leadership is critical. Two words of advice, then, for President Obama: Evolve faster.”

Perhaps Obama won’t be evolving much because “God” doesn’t evolve – “God’s” been perfect and without error since “He” conceived himself. So if Obama’s getting his advice from his “God,” then it’s going to be a cold day in “Hell” before we see a real advance in Federal law about marriage equality.

Let’s be out in the open about the opposition to same-gender marriage. Plain and simple, religion is being used as the excuse and the shield to support the every-day variety of prejudice and fear whether it’s at the grassroots or the top of the political food chain. The civil rights, happiness, and livelihood of me and millions of other gay and lesbian American taxpayers are being held hostage by flat-earth thinking.

I’m so amused by those elected reps and senators – either at the state or DC level – who always invoke their constituents’ religious views when it comes to a civil rights vote.

Would that elected person vote in favor of the re-institution of miscegenation – the prohibition of inter-racial marriage – or maybe a return to segregated public facilities if his/her constituents demanded it?

Here’s a link to an op/ed by Kerry Eleveld about marriage equality.

During his summer vacation I would recommend that President Obama attend a First Amendment refresher course.

It’s all well and good to have a religion but when it interferes with the equality under law of law-abiding citizens it needs to move out of the way.