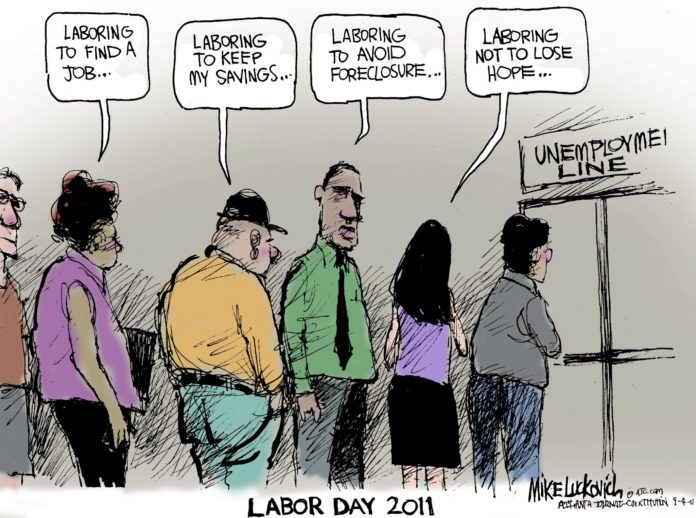 Happy Labor Day! This is your third opportunity as President to go beyond your past tepid Labor Day proclamations.

You could convey to 150 million workers that you’re going to start doing something about your 2008 campaign promises to labor. Recall that you clearly promised to press for a $9.50 federal minimum wage by 2011. Arguing that having millions of Walmart type workers make the leap from the present $7.25 per hour will pump nearly $200 billion in consumer demand for our recessionary economy.

You can add that a $9.50 minimum is still less than what workers made under the minimum wage in 1968, adjusted for inflation, when worker productivity was half of what it is today. Besides, businesses like Walmart have received windfalls year after year due to the minimum wage lagging behind inflation for decades.

Your second promise in 2008 was pushing for card-check legislation – a top priority for the AFL-CIO whose member unions helped elect you. “Give me the cardcheck,” Rich Trumka, now AFL-CIO president, told me in 2004, “and millions of workers will organize into unions.”

I may have missed something but when was the last time you championed card check after you took your oath of office? Did you bring labor together, the way you brought big business together for their demands, and launch a public drive to overcome many of the obstructions workers now have to confront under the present corporate driven union-busting climate?

I met with Mr. Trumka recently. It seemed he’s given up on you for the card check or minimum wage. With such low expectations, you probably can make organized labor a little more enthusiastic for you if you simply mentioned these two measures in your next State of the Union address. You could even break an old taboo and say that the notoriously anti-worker Taft-Hartley Act of 1947 needs to be changed. Just talking about those issues will “keep hope alive,” for “change you can believe in.”

Even better, mention these with a paragraph on the spreading poverty – yes, finally use that word “poverty” which is decidedly not “middle-class.” Last January, your State of the Union address ignored poverty – accelerating child poverty, hunger, homelessness, mass unemployment and underemployment do add up to that phenomenon. If not deeds or action, at least just give them some words.

As big business abandons American workers and takes jobs and industries to communist and fascist regimes abroad – regimes that know how to keep workers in their place at 50 or 80 cents an hour – reactionary Republican governors are stripping public employees of their collective bargaining rights. These Republicans are laying off their teachers and other workers so they do not have to repeal the corporate welfare drains on their state treasuries. Dozens of corporate welfare tax abatements, subsidies, giveaways, bailouts and other freebies are embedded in their state laws.

When the Wisconsin workers protested and filled the square in Madison, Wisconsin, they were expressing your “fierce urgency of now.” But you would not go and address just one of their rallies to support their jobs and rights.

Just before the last big rally of some 100,000 people from all over Wisconsin, the state federation of labor invited the Vice President to speak to them in Madison. The White House said no. Isn’t Joe Biden known for saying “I’m a union guy?”

Can you imagine a national Republican presidential candidate refusing an invitation to speak to 100,000 Tea Partiers by comparison?

But then these Democratic workers, you may believe, have nowhere to go in November 2012. That’s right, they don’t have to go anywhere; they can stay right at home along with their volunteer hours and Get-Out-The-Vote calls. Political withdrawal is real easy to do. Remember 2010. Remember the sharp drop in the youth vote. You may be met with less enthusiasm than Congressional Democrats encountered in 2010.