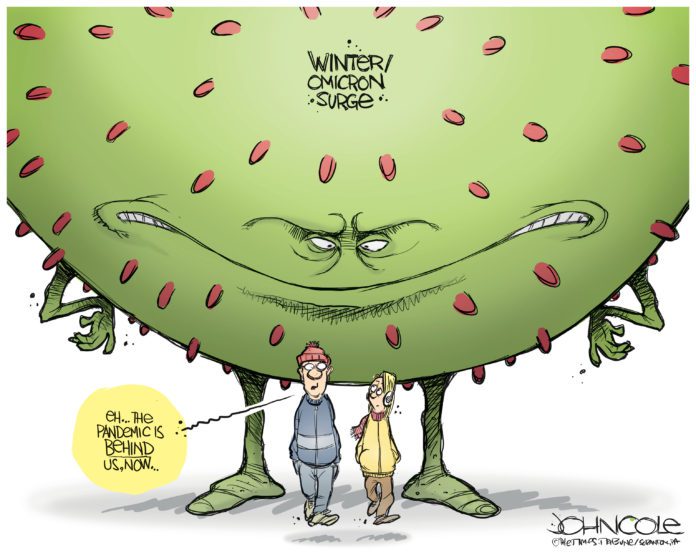 Unseasonably warm, less than two inches of rain in the last 60 days, high sere, dormant pasture grass. Mix those ingredients with 20 to 30 to 40 mph winds sweeping up and down the plains and you have the perfect recipe for wildfires here in southwest Oklahoma.

Faced with this threat to public safety after a rash of fires the previous weekend, Stephens County Commissioners joined others of their ilk throughout this state and south of Red River in issuing a county-wide burn ban, depriving property owners of their right to treat their land as they see fit.

Such burn bans are necessary because some folks are so self-absorbed as to think that their individual rights supersede any obligations as members of their communities. I remember the old admonition from the ‘60s about how rights also include responsibilities.

Others do not. From noisy neighbors to corporate polluters to good ol’ boys and girls burning up pasture nutrients regardless of climatological conditions, society as a whole is constantly opposed by irresponsible me-firsters with no regard for their neighbors.

So, burn bans are enacted to protect the general welfare. [Or maybe just property?]

But, as our country passes 800,000 COVID-19 deaths, vaccine mandates, masking requirements and pandemic precautions are anathema to red states, whose leaders should be red-faced with shame for the sickness and death their deliberate ineptness has caused.

After an autumn decline in coronavirus cases and hospitalizations, the fallout from Thanksgiving gatherings has spurred another surge.

A recent news streamer on Good Morning America predicted holiday travel this year to resemble “pre-pandemic” levels. We can expect another spike after the first of the year.

A recent Yahoo Sports headline said, “NHL grappling with COVID-19 as more than 30 players enter protocol.” I follow the St. Louis Blues, who have been playing [and winning, mostly] more than a week without a full complement of forwards and with their minor league goalies because regulars are sidelined by COVID.

Hockey not your off-baseball-season sport? Yahoo Sports reported Tuesday that the NFL’s “COVID reserve list had ballooned to nearly 100 players, with the expectation that number will climb over the course of the week.”

By the end of the week, the league was rescheduling games.

That’s going to make it tough for the gamblers to set the spread. It will be worse for bettors losing key players at inopportune times.

Due to politicized inaction, the pandemic is still raging, even after those with better brains than beets have done all we can to protect ourselves – and others, as with the neighbors who willingly proscribe prescribed burns.

The ignorant and arrogant might prefer to ignore COVID, but the virus is not ignoring us. The CDC reported that one of every 100 U.S. senior citizens has died of the virus. And, of course, of course, as NPR reported at the first of the month: “Pro-Trump counties now have far higher COVID death rates. Misinformation is to blame.”

Alan Morgan, head of the National Rural Health Association, told NBC News: “We’ve turned many rural communities into kill boxes. And there’s no movement towards addressing what we’re seeing in many of these communities, either among the public, or among governing officials.”

Yes, faced with the prospect, the forecast, the chance of wildfires, officials can take decisive action to protect the general welfare. And Gov. Kevin Stitt and his legislative cronies do not swoop in and forbid such protections.

But with a killer virus picking off constituents left vulnerable by 20 months of political idiocy, they all refuse to do anything that might save lives.

Previous article
Bought And Paid For
Next article
Why Are Republicans Killing Their Own?