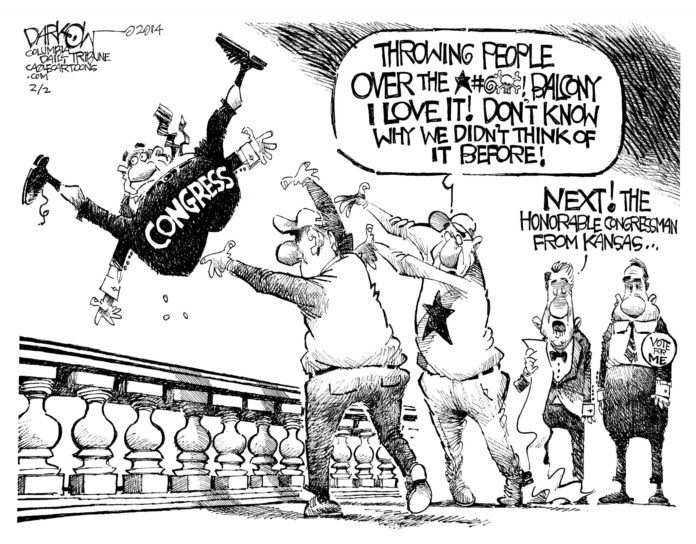 The Oklahoma Legislature convened Feb. 3 with the traditional State of the State address. The central theme of Republican Gov. Mary Fallin’s message was a call for more tax breaks for business.

To the casual observer, it may appear just another pitch for the often lauded, never successful, “trickle down economics.” For Gov. Fallin, it was much more – it was her plea to the ultra-conservative element of what’s left of the Republican Party that she really, really, deserves re-election.

Fallin is like many GOP officeholders who, elected in a Tea Party Evangelical rush to power four years ago, are fighting for their political lives against their own electorate. The issue isn’t if she can win in November, but can she win the primary in June.

Sullivan won in 2002 with 66%. He was a freshmen conservative true believer who slept in his office to “save the taxpayer money.” He also took time out to visit the Betty Ford Clinic with an alcohol problem.

He fought the Affordable Care Act, blamed President Obama for everything from the destruction of Pompeii in 79 AD to the Japanese earthquake of 2011. He carried the conservative flag with energy and conviction.

Fallin is a veteran campaigner. She has never lost an election. She has served in the state House of Representatives, three terms as lieutenant governor, represented the Congressional 5th District, and is the state’s first woman governor.

When it comes to campaigning, Fallin is no one’s fool. Nothing about the Sullivan experience is lost on Fallin.

She has not been just conservative, but pandering to the Tea Party Evangelicals. She refused to join in affordable healthcare, refused to allow gay Oklahoma National Guardsmen to file for spousal benefits, helped ravage the education budget, and allowed people to be executed even when the Pardon and Parole Board recommended clemency. She has, in short, done anything and everything but dance naked in public with a snake to appease the far right and avoid a primary.

Have her placating efforts succeeded? Maybe, maybe not. This is where things get interesting in a red state.

Last Christmas former state senator and failed gubernatorial candidate Randy Brogdon announced he would once again challenge Fallin for the party’s top spot. Why? Because, after all she had done, she was not Tea Party enough.

As politicos awaited the opening of the coming legislature, it appeared the only real election excitement would be watching Fallin and Brogdon beat up on each other. After all, a Democrat couldn’t launch a serious effort for state office.

On Jan. 16 the election landscape changed. Sen./Dr. Tom Coburn announced he was resigning at years’ end to address problems with cancer. Sen. Coburn was elected to his seat in 2004, the same election that saw Oklahomans define marriage as being only between a man and a woman. Irony indeed that Coburn’s announcement came just two days after that referendum was struck down by Northern District of Oklahoma Federal Judge Terence Kern.

As Coburn’s announcement hit the streets candidates began to emerge. Not only was there a rare open Senate seat in the offing, the political stars were now arranged in a rare convergence.

As it now stands there are Republican primaries for Congressional Districts 3 and 5, a Senate seat and possibly two legislative leadership seats that only less than a month ago were not in play. U.S. Sen. James Inhofe is also up for re-election.

The Tea Party knives have been drawn as the shadow of Sullivan’s 2012 loss looms over each primary. And the Exchequers of the millions of ultra conservative dollars have starting staking out their candidate preferences.

The first announced candidate for Coburn’s seat was James Lankford, the two-term congressman from District 5, the seat vacated by Fallin when she ran for governor. Lankford brushed aside six primary opponents in the 2010 election and has ascended to the fifth ranking Republican as head of the GOP congressional policy committee.

Prior to his congressional run he worked for the Baptist General Convention of Oklahoma as director of their Falls Creek camp facility as director of youth ministries and evangelistic specialist. There are 1,800 Baptist congregations in Oklahoma. Lankford has, in addition to mentoring thousands of Baptist youth, been guest minister or lecturer at hundreds of congregations. He often tells interviewers his political career is a “calling from God.”

Lankford holds a Masters in Divinity from the Southwestern Baptist Theological Seminary. He is closely aligned with fellow Oklahoman, Rep. Tom Cole, Deputy GOP Whip in the current House of Representatives.

Lankford announced his candidacy Jan. 20 and drew fire from the Senate Conservative Fund and Club for Growth, two of the more financially influential conservative money funds. SCF Executive Director Matt Hoskins cited Lankford’s votes on the debt ceiling agreement and lack of effort to defund the Affordable Care Act. Club for Growth spokesman Barney Keller noted even though the congressman had a 78 rating from his group, they would rather have had someone more conservative, such as Bridenstine.

Nine days after Lankford’s announcement Oklahoman’s most notably ambitious politician, House Speaker Tahrohon [T.W.] Shannon stepped into the fray. Shannon was elected speaker at the end of the 2013 session. He was first elected to the house in 2006.

Shannon is of mixed Chickasaw and African-American heritage, allowing claim as first African-American House Speaker, in the spirit of Barack Obama’s claim to the presidency. He has a law degree but does not practice.

Two of his more notable efforts have been to sell off unused state property and to build a chapel within the state Capitol building in much the same manner as the Ten Commandments masonry erected on the Capitol lawn with private funds. The chapel venture has yet to gain traction.

As noted in The Observer, 12-minute announcement was laced with scripture references, along with the occasional “Amen” from supporters. Shannon bills himself as the “servant of the most high.”

As with Lankford, Shannon is active in the Baptist church as noted in several biographies. He has also made television ads for the Chickasaw Nation. Chickasaw Chief Bill Anoatubby stood with him during his announcement.

Conservative GOPAC has placed him on their advisory board. He has also been chosen by the American Conservative Union as a rising star within the ultraconservative culture.

The Senate primary thus far smacks more of religion than actual political policy: Lankford has been “called” to politics while Shannon is the “servant of the most high.” Ultimately each candidate will attempt to portray the other as not in the true conservative traces … ???

A third GOP candidate is Norman paramedic Jason Weger, a first-time candidate who’s running, at least in part, because he is unhappy with his party’s lack of diversity – he is gay.

Just how much blood letting there will be remains to be seen.

As Shannon and Lankford saddle up for the campaign trail, a new wrinkle has been added. Brogdon has changed his mind, switched races, and is now apparently is running for Coburn’s senate seat.

This three-way primary may be the most exciting show in the state in a long while.

Fallin may not be out of the primary woods just yet. Will the Tea Party and/or evangelicals produce another challenger?

The Oklahoma primary show is just beginning as candidates try to out- conservative and out-god each other. As observed, by the time the June election rolls around there may even be a call to make overtime parking a capital crime.

Actually, filing for office won’t occur until April. In the meantime one is reminded of the early days of rock ‘n roll radio here in the Red State: “The HITS just keep on comin’.”

– Richard L. Fricker lives in Tulsa, Oklahoma, and is a regular contributor to The Oklahoma Observer. His latest book, The Last Day of the War, is available at https://www.createspace.com/3804081 or at www.richardfricker.com.