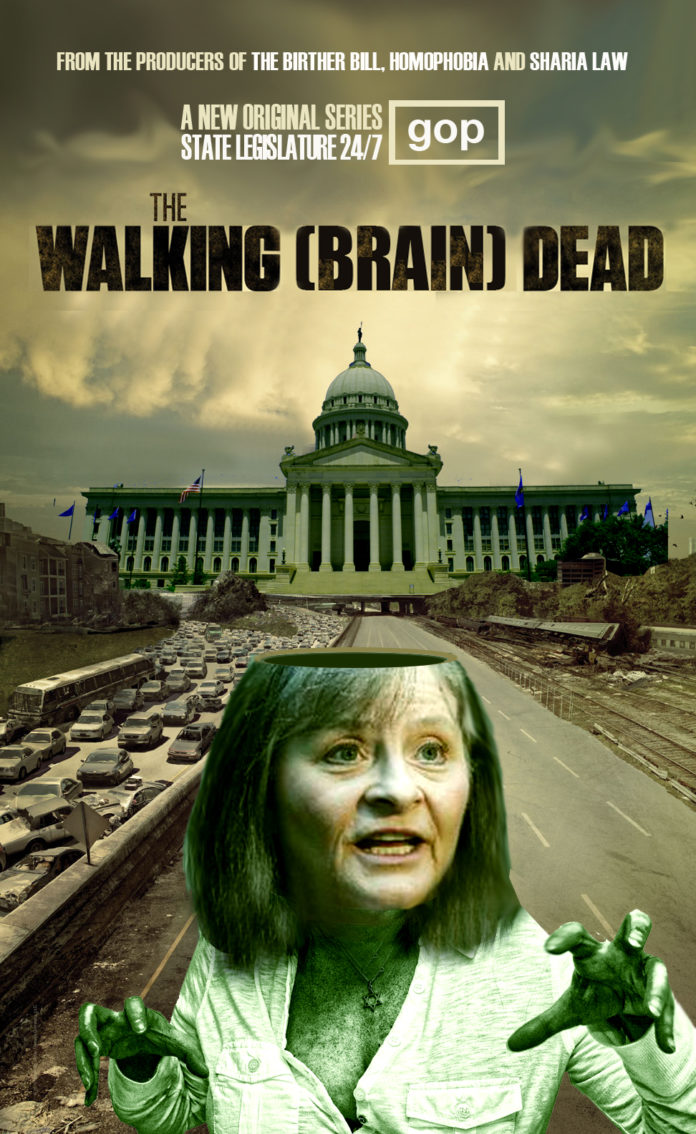 By her own words Oklahoma’s Bigot-in-Chief, GOPer House Rep. Sally Kern, has learned nothing in 10 years.

Never missing an opportunity to step out from the shadows of desperation, Kern used the 10th anniversary of the 9/11 attacks to sing yet again her hit-single tune, “Gays are More Dangerous than Terrorists.”

A recent interview with her colleague, Peter LaBarbera of Americans for Truth About Homosexuality, to promote her new book, maudlin-ly titled, The Stoning of Sally Kern, has her singing the same lyrics in the same key as she did in 2008.

Referencing her religion’s tradition of hyperbole and myth, Kern claims a victim’s suffering without showing the wounds. That she would use such a description for herself when such a condemnation is still used in the world for capital punishment shows the lack of intelligence she’s so proud to display. People who are stoned do not live to write a memoir about it. She cries the crocodile tears to drum up sympathy and campaign dollars.

Intentionally making herself a celebrity, she disingenuously feigns amazement that anyone would call her out for the lies she tells, further adding to her self-proclaimed victimhood.

Sally Kern never gives up telling lies that represent her own twisted attempt at projecting her own fears.

If I were a fundie, preached Inquisitional nonsense, and in addition, had a possible gay/lesbian family member, I’d probably be doing the same thing she and her husband, Steve Kern, do.

Those who protest gay/lesbian diversity the loudest often turn out to have a big lock on their own closet. Why does private behavior and civil equality inflame the imagination of our worst enemies?

As the documentary Outrage http://www.gaylesbiantimes.com/?id=14917 shows, the wrath of our civil equality enemies goes past simple jealousy and entries on a score sheet. I think genuine mental instability is on display.

The tiny minority of registered Oklahoma voters who live in Kern’s Legislative District 84 have kept her on the public payroll since 2004. http://www.okhouse.gov/District.aspx?District=84

I find it remarkable that despite good candidates running against her, this fearful majority in her district prevails.

What does this fact say about our efforts to elect reasonable candidates? What does it say about the power of ignorance and superstition?

Until we replace these sorely blinkered politicians through peaceful and legal means, we’ll be hearing more from lawmakers such as Sally Kern.

They must be drowned out by the volume of our speech, lost in the presence of our crowds, dissected by the precision of our words.