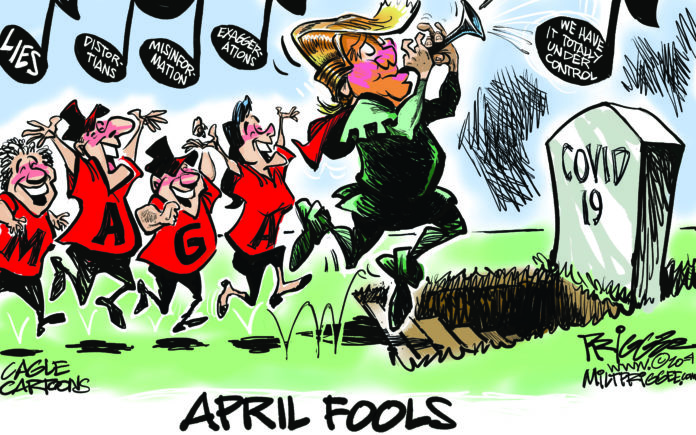 I travel the back roads whenever possible. I’m not in that big of a hurry. There are fewer bad drivers to deal with. The percentage is likely the same; the total considerably less. I enjoy getting a good look at American small towns. Some are pretty cool.

One thing I always do is assiduously obey the local speed limits. It has nothing to do with speed traps that I might not be aware of – or those I am. I figure every town has a local menace whose absence would be welcomed. But as outsider, I don’t know whom it is. My speeding projectile of a vehicle might T-bone the town saint instead. I don’t know enough to decide who gets to live or die.

Not so our Republican friends. As COVID-19 spreads across the country – filling hospitals, closing businesses, putting people out of work and turning the stock market’s Obama Bump into a Trump Slump due to the president’s willful lack of preparedness – GOP leaders at all levels have stepped forward to announce that many Americans are expendable, collateral damage if you will, if they can just manage to spend a little money on their way to the graveyard.

Prior to last weekend the president, with absolutely no data to support him – since the data screamed the opposite – decided that Americans should fill the churches on Easter and get back to work to save the economy regardless of the cost in human lives. He said, “We cannot let the cure be worse than the problem itself.”

[Somehow, the adults were able to get him to extend the social distancing guidelines through the end of April.]

One problem is a worldwide pandemic that is particularly deadly to the elderly and people with underlying health issues. This problem spawned a second problem in America due to months of presidential lying as he tried to downplay the seriousness of the situation. And shame on Rep. Tom Cole’s boot-licking misinformation column two weeks ago that tried to spin Trump’s incompetence into something praiseworthy.

Trump’s Big Lie ways have had consequences. As reported by Raw Story: “One of the first deaths of a Virginian from coronavirus was a 66-year-old Christian ‘musical evangelist’ who fell ill while on a trip to New Orleans … Landon Spradlin had previously shared opinions that the pandemic was the result of ‘mass hysteria’ from the media.” Gosh, wonder where he got such an idea?

The third problem is the effect the coronavirus has had on the stock market – which, in Republican circles, becomes the only problem that matters.

The cure for this last problem is obvious to the GOP. Throw caution to wind, get out of self-isolation, forget social distancing and get yourselves back to work. Stock prices depend upon you. And, if you die, you will be received into a Valhalla of Capitalism. Of course, if your irresponsibility infects and kills others, that’s just their hard luck.

Talking on Fox News, Texas Lt. Gov. Dan Patrick put it bluntly: “Let’s get back to work, let’s get back to living. Let’s be smart about it and those of us who are 70-plus, we’ll take care of ourselves. But don’t sacrifice the country, don’t do that, don’t ruin this great America.”

Sharing this view, according to Salon, “Right-wing propagandist Glenn Beck told viewers of his BlazeTV show that Americans who are older should just go back to work and prepare to die: ‘Even if we all get sick, I would rather die than kill the country.’”

And those your ignorance might kill on your way to martyrdom, Glenn?

The extent of suffering in Oklahoma due to Gov. Kevin Stitt’s foot-dragging remains to be counted.

But the elderly – and some of us feel pretty good right now, thank you – and those with compromised personal health are not the only targets for our Crisis-Creator-in Chief. With the petulance of a five-year-old, the president told VP Mike Pence not to answer calls for assistance from Washington Gov. Jay Inslee or Michigan Gov. Gretchen Whitmer because they had said mean [true] things about his dereliction of duty.

So, folks in those two states have been deemed expendable as well – even though Michigan was largely responsible for his Electoral College victory despite having 10 million Americans preferring someone else for president. Well, he’s never been the brightest bulb in the pack. He’s the guy, speaking of those who had just lost their jobs to coronavirus, said: “What they do right now is keep receiving their paychecks.”

When questioned about rich celebrities with no symptoms getting scarce COVID-19 tests while others with symptoms are excluded, the president offered, “perhaps that’s the story of life.”

Or death, as reported by Gizmodo:

“A 17-year-old boy in Los Angeles County who became the first teen believed to have died from complications with COVID-19 in the U.S. was denied treatment at an urgent care clinic because he didn’t have health insurance, according to R. Rex Parris, the mayor of Lancaster, CA. Roughly 27.5 million Americans – 8.5% of the population – don’t have health insurance based on the latest government figures.”

If only the poor and other expendables could just throw themselves on the virus as if it were a live grenade. We need some sacrifices, people, to keep the fat cats fat – fatter, if possible.