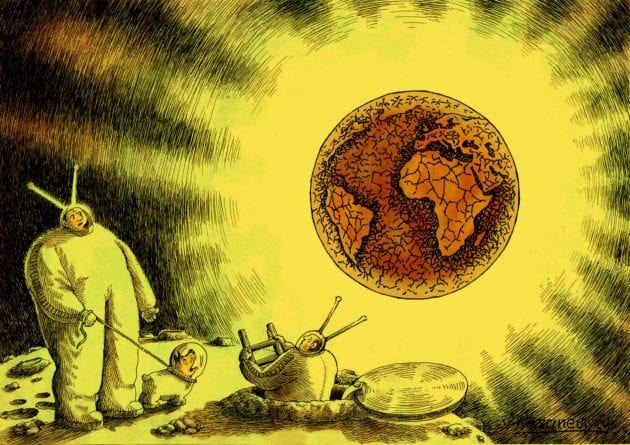 Our Insignificance Can Be Significant

My day in my office starts with a quick check of the weather forecast, a slide to the right to check my e-mail and then a stop at the Astronomy Picture of the Day. I must confess that I appreciate the beauty of most of the pictures more than I understand their descriptions. But our scientists know what they’re looking at and we can grasp some meaning from the images as well.

On Aug. 24, we learned that: “Globular star cluster Omega Centauri, also known as NGC 5139, is some 15,000 light-years away. The cluster is packed with about 10 million stars much older than the Sun within a volume about 150 light-years in diameter. It’s the largest and brightest of 200 or so known globular clusters that roam the halo of our Milky Way galaxy … ”

The main impression, first from many of the pictures and then from the descriptions is the vastness of the universe.

If a dragon swallowed the Sun, we would have light for eight minutes before the darkness descended. According to Bruce McClure, whose description from Astronomy Essential, Space was posted at Earth/Sky, it would take about 63,000 of these eight-second “astronomical units” to make up a light year.

The closest star to our Sun is Alpha Centauri, about 4.4 light years distant.

Whether we’re alone in the Cosmos or not, talking over the backyard fence with neighbors does prove problematical.

During my stays in college and then in another university town, I got to know some smart and inspirational professors. A few contributed mightily to my development though my primary mentor declined the honor of accepting that designation.

Somehow they always seemed out of favor with the administrative authorities. Birds of a feather, I guess. One of the running jokes among them was the academic battles were so bitter because “so little was at stake.”

Looking at Earth and our place in the universe, one could easily reach the same conclusion.

Earthlings should have gotten a taste of this humility on Christmas Eve, 1968, when astronaut William Anders, while orbiting the moon, took a picture of an Earthrise coming up over Moon’s horizon. A little blue marble against a black background. There’s a huge universe [at least one] out there; our momentary presence shrinks in significance.

Human greed, hatred, venality and cruelty have little impact on the universe. Perhaps, if we embraced our insignificance, we could treat each other with more kindness; offer a helping hand instead of shove in the back.

The Oct. 6 installment read: “The Horsehead Nebula is one of the most famous nebulae on the sky … The horse-head feature is dark because it is really an opaque dust cloud that lies in front of the bright red emission nebula. Like clouds in Earth’s atmosphere, this cosmic cloud has assumed a recognizable shape by chance. After many thousands of years, the internal motions of the cloud will surely alter its appearance … ”

The question from our viewing station is whether, “after many thousands of years,” Earthlings will still be in denial about our common humanity, still seeing differences as dangers instead of enhancements to make our lives more exciting?

The first among us to take an in-depth look at the universe, Galileo, was hounded by the authorities 400 years ago for threatening their power. The situation has not improved – witness those who advocate global warming for temporary profits – but, as with Galileo, the truth does not change with human whims.

Previous article
Booked Solid
Next article
What If You Were To Own Your Own Power Company?