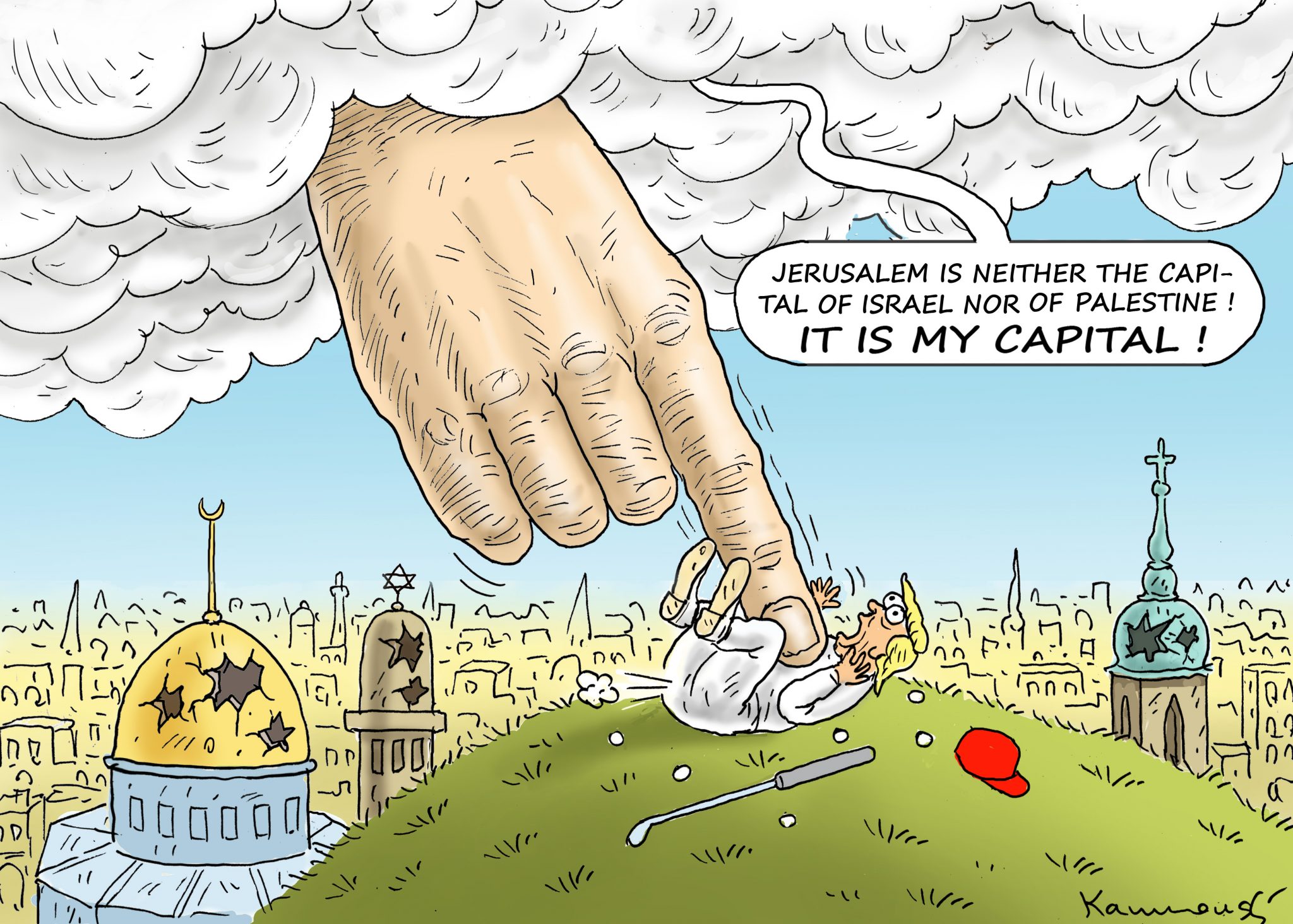 Please, if there is a God, render Trump mute, give him laryngitis, lockjaw, or put a sock in it. There has never been an occupier of the Oval with as little knowledge of history, government or political negotiation as Trump. He makes GW Bush looks like a genius.

The Palestinians disrespected his “great” VP. As far as I am concerned they were overly nice for not tar-and-feathering him and riding him out on a rail. Trump declared Jerusalem the capital of Israel like he was Moses on Mount Sinai.

The Dome of the Rock will still be there, unless Trump chooses to build his embassy there. It is a rather Trumpy edifice with that gold dome. The Israelites consecrated it in Exodus, Abraham supposedly planned to sacrifice Isaac there, Solomon erected his temple there, Mohammed began his ascent to heaven there and returned there, Conquering Christians [The Crusades] reconsecrated it as a Christian church and when they were defeated it went back to Islam, but it isn’t a mosque it is a shrine.

Trump says the status of Jerusalem is the “hardest subject,” so just give it to the Israel. So the armed occupation of the Palestinians is just a piece of cake. You know, where they are forced to stay with the Israelis surrounding them with Jewish settlements as fast as they can build them. It is like the Palestinians haven’t lived in Palestine for centuries.

They wouldn’t talk to Pence after the U.S. was so kind and decided not to give $45 million in aid for health care and food. The entire world must learn sacrifices have to be made to pay for Trump’s trillion dollars in tax relief to people who don’t need money and won’t create anything except more wealth for themselves.

Trump claims this is the closest, since the conflicts began, that they have been to peace. I am so tired of him bragging about stuff when he knows less about history than practically anyone. The U.S. has always been against new Israeli settlements, but has made no effort to stop them, while letting all existing ones remain. Israel is still encouraging settlements and the U.S. is still not supporting them by not preventing them.

“You won one point [Israel] and you’ll give up some points later on in the negotiation, if it ever takes place,” Trump said. “I don’t know that it ever will take place.”

What the hell does he think Netanyahu or the Israelis will give up? There is not a peaceful molecule in Netanyahu. Will they remove the settlements in the occupied territories or the fences and walls they have built with check points and guards? If Netanyahu does that, the Jews in the settlements will chew him up and spit him out which is what they will do to Trump.

But then, as usual, Trump has no friggin’ suggestion for what he wants the Jews to be willing to lose. This is not a damn business negotiation where you let the guys from engineering use the girls in accounting’s fridge in the break room. This is about life and death.

Previous article
Fed Up With Corporate-Rigged Politics?
Next article
Why I Marched In 2017 – And Again In 2018