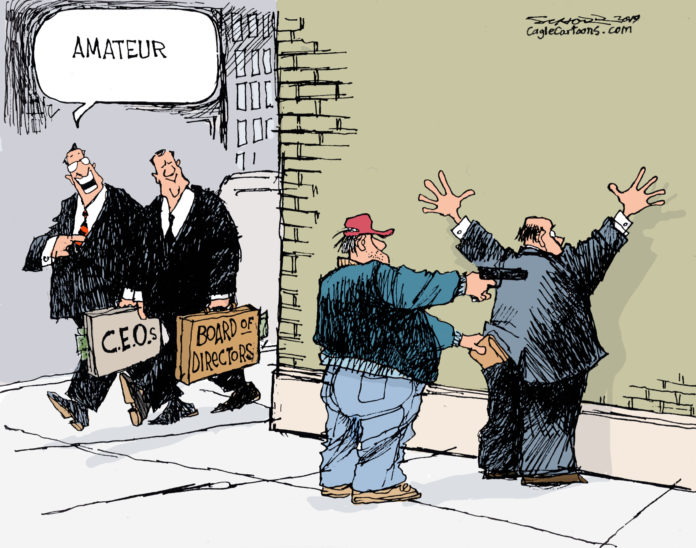 As a sycophantic fan of our twice-impeached former president, it is no surprise that Gov. Kevin Stitt keeps acting as if he alone represents the people of Oklahoma. Having just been knocked down in the state Supreme Court for illegally negotiating tribal gaming contracts without mandated legislative input, Stitt turned around and dictatorially decided to turn the voter-enacted Medicaid expansion into a private business plum.

On Jan. 29 he gave four for-profit organizations the management rights to the $2.2 billion fund. And, of course, with management comes management fees, meaning that money meant to improve Oklahomans’ health will be used instead to boost corporate bottom lines.

“Privatization” is what Republicans call this tactic. Find a governmental service – from trash collection on the local scene to prisons at the state and federal levels – and then devise a plan to let cronies in on a guaranteed profit.

The GOPQ claims to want “small government.” What they want is corporate socialism in its purest form – socialism to benefit their corporate donors.

Remember, they were planning to attack Social Security and Medicare before the Democrats won the House in 2018. Their relentless attacks on Ben Franklin’s Postal Service is fueled by visions of dollar signs at getting their dirty hands on so essential a service. [Trying to screw up last year’s election was just a convenient sidebar.]

President Joe Biden signed an executive order last month to put an end to the federal government using private prisons. President Obama had taken such steps during his administration, but the intervening Republican administration reversed those actions in favor of privatization.

Former Democratic Oklahoma gubernatorial candidate Drew Edmondson had also advocated state-run prisons, saying if the state is serious about incarcerating people, it should take responsibility for overseeing them while in prison.

Speaking on a NonDoc podcast, House Majority Leader Jon Echols said, “I have some real concerns using an outside of the state company to come in and do this. I don’t know why we can’t do it inside the Health Care Authority. I think it can do the exact same function that we’re doing right now.”

The reason, of course, is that, if the state takes care of the situation, no corporations can take their cuts. And is Stitt’s goal to make Oklahoma a Top 10 state in sending our money to other states?

A Republican, Rep. Echols is off-topic, as is Sen. George Burns [as also reported by NonDoc]: “Based on my conversations, they aren’t sure who it’s good for other than the out-of-state insurance companies and their stockholders.”

Dr. Pete Aran, chair of the OSMA board of directors remarked, “While we certainly have strong feelings about outsourcing the state Medicaid program to for-profit companies, this is about process. The fact remains that Oklahoma’s legislature has not passed the appropriate legislation or funding to move managed care forward. We believe it is premature to move ahead with these contracts until the legislative process is completed.”

Last week, Channel Four added the Oklahoma Osteopathic Association, Oklahoma Society of Anesthesiologists, American Academy of Pediatrics-Oklahoma Chapter and the Oklahoma Dental Association to OSMA’s injunction, “which would put the contracting process in Gov. Kevin Stitt’s effort to revamp Medicaid on hold until the State Legislature can review and approve the major change.”

This is just the latest chapter in Stitt’s profits-over-people attitude – most visible in his deadly inaction during the current pandemic. Our businessman governor knows how to look for business profits from public funds, not so much how to look to the business of running state government.