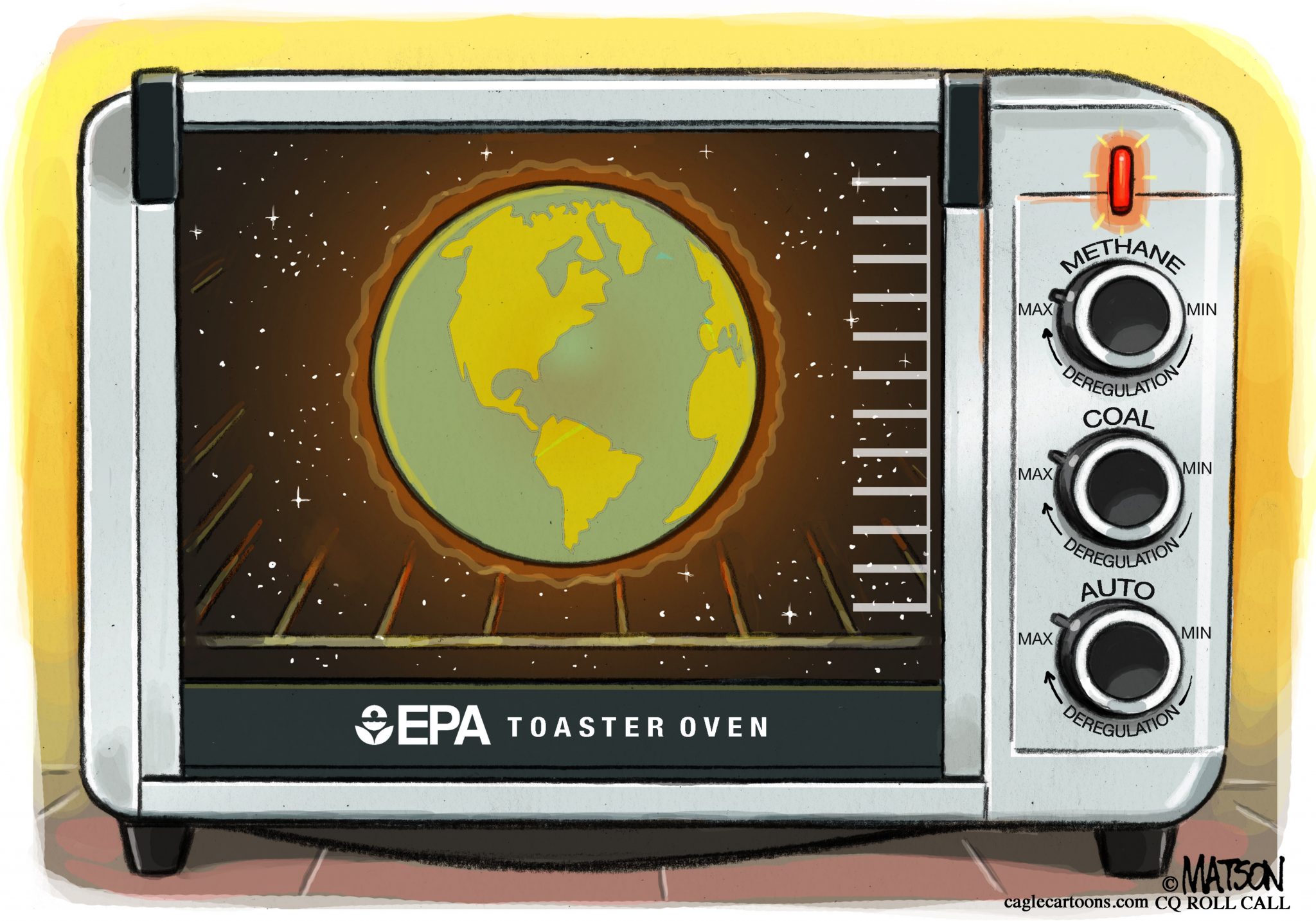 Protecting The Polluters And Their Filthy Profits

Greed is a sickness that often victimizes the innocent more than those who embrace it.

Yes, Scott the Grifter Pruitt was booted back home where Republican politicians continue to profit from their positions. But acting Energy Pollution Advocate leader Andrew Wheeler forges ahead with Greed’s Own Party’s plan to push the energy industry to filthier profits regardless of the damage it inflicts upon Earth and its inhabitants.

“In yet another rollback of public health protections, the Trump administration is preparing to gut a rule that has dramatically cut emissions of mercury, a toxic chemical known to harm the nervous systems of children and fetuses.

“The New York Times reports that the Environmental Protection Agency has drafted a legal proposal to justify disregarding the public health economic benefits from curbing emissions of mercury and other heavy metals from coal-fired power plants. The Times says proposal could lead to repeal of the rule, which since implemented by President Obama has cut mercury emissions by an estimated 70%.

“Coal plants are the largest source of mercury pollution. Rain washes it into the ocean, where it is consumed by fish and converted to highly toxic methylmercury, which accumulates in fish tissue – and in people who eat the fish.

Oh, by the by, EWG points outs that Brett Kavanaugh, famous for dirty deeds in other areas, dissented in favor of the polluters when part of the healthier rules were challenged in court.

The pro-mercury ruling came shortly after it was reported in EcoWatch that the EPA had put Dr. Ruth Etzel, head of the Office of Children’s Health Protection, on administrative leave.

“This seems like a sneaky way for the EPA to get rid of this program and not be upfront about it,” Dr. Mona Hanna-Attisha, a top Michigan pediatrician whose blood tests of Flint residents helped confirm lead poisoning from the water there, told The New York Times.

“Sources close to the agency,” EcoWatch reports, “said that the children’s health office often calls for stricter standards on regulating chemicals and pollutants, since children are more vulnerable to toxins than adults due to their size, the fact that they are still developing and the fact that some of their behaviors, like crawling or sticking objects in their mouths, put them in more potential contact with contaminants.

“This has put the office at odds with an administration intent on rolling back environmental regulations.

“The anonymous official said that a proposal for reducing children’s lead exposure, which had been in development for more than a year with the help of 17 federal agencies, had been stalled since July.

“Etzel had also opposed a move by the EPA’s current office of chemical regulation leader and former chemical industry lobbyist Nancy Beck to rescind an Obama-era standard saying farm workers under 18 could not apply the most toxic pesticides.”

Well, who cares about kids anyway?

In mid-August, CBS News reported on another EWG study that found glyphosate – “a weed-killing chemical that some health authorities link to cancer – in a number of popular breakfast foods and cereals marketed to children. The study … discovered trace amounts of the most widely used herbicide in the country in oats, granolas and snack bars. Thirty-one out of 45 tested products had levels higher than what some scientists consider safe for children …

“‘We’re very concerned that consumers are eating more glyphosate than they know,’ said Scott Faber, vice president of government affairs at EWG … He said he and his team at EWG had a lab test involving ‘45 samples of products made with conventionally grown oats’ and found glyphosate – the active ingredient in the Monsanto weed-killer Roundup – in all but two.”

Then we have Ellen Knickmeyer, who monitors environmental issues for the Associated Press:

“The Trump administration is quietly moving to weaken U.S. radiation regulations, turning to scientific outliers who argue that a bit of radiation damage is actually good for you – like a little bit of sunlight.

“The government’s current, decades-old guidance says that any exposure to harmful radiation is a cancer risk. And critics say the proposed change could lead to higher levels of exposure for workers at nuclear installations and oil and gas drilling sites, medical workers doing X-rays and CT scans, people living next to Superfund sites and any members of the public who one day might find themselves exposed to a radiation release …

Well, cost-saving is a holy hyphenate to polluters and their pals.

The Republican war against the environment continues at such a pace that it is hard to keep up. Just last Thursday Common Dreams reported that the guy who defended the company that caused the worst oil spill in U.S. history had been confirmed to head the Justice Department’s Environment and Natural Resources Division.

“Clark’s blatant hostility toward environmental protection is good news for polluters, but awful news for the rest of us,” according to the aforementioned Ken Cook of EWG.

And while these actions put bull’s-eyes on us individually, collectively they will create catastrophic consequences for Earth by 2030, as documented by a recent UN report – another of those annoying bits of science that ignoring will not forestall.