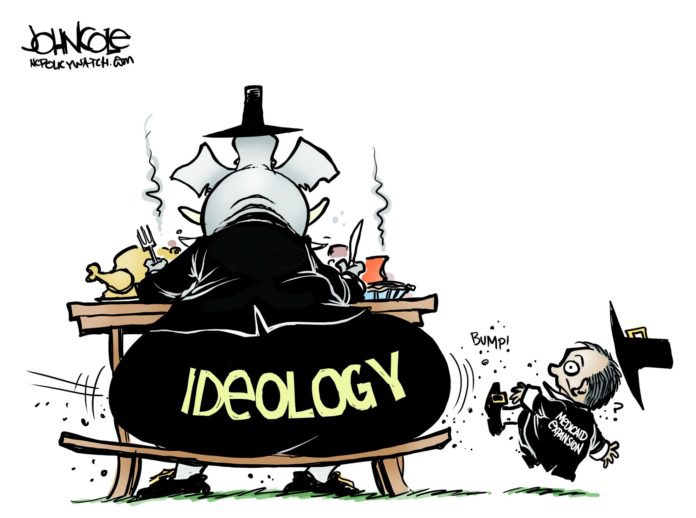 One of the most enjoyable aspects of my job is the opportunity to meet and speak with high school students at the Capitol and across the district. This week, I had the opportunity to address two groups of bright student-leaders from Oklahoma’s outstanding CareerTech system.

As we discussed current issues and Oklahoma government, I realized that none of those students were born until two years after the Oklahoma City Bombing and some of their teachers were not old enough to remember the fall of the Berlin Wall. Then it hit me. I was the only person in the room who had lived during the Cold War era.

Those were the years that Radio Free Europe sent liberty broadcasts across the Iron Curtain into the USSR and Eastern European bloc countries that were isolated from the world by the socio-political and economic lockdown of the Soviet Union. The broadcasts were intended to counter internal Soviet propaganda and misinformation and are credited with inspiring young men and women like Lech Walesa to have the courage to eventually stand against repressive regimes.

The message of free democratic republics got through despite the fact that in the late 1950’s, the KGB spent more money attempting to jam those radio transmissions than the Soviets spent on all domestic and international broadcasting combined. In other words, the Cold War Soviets were more concerned with jamming information from outside the country than they were in addressing internal issues and making positive improvements for their own people.

In eerily similar fashion, the reds of this red state appear to be comfortable ignoring the fact that the United Health Foundation says Oklahoma ranks 43rd in the nation in overall health, 49th in senior health and nearly last in all access to health care.

This week Gov. Fallin said that there is no “appetite” in Oklahoma to accept federal dollars to provide Medicaid to working Oklahomans who earn up to 138% of the federal poverty level. The “deficient” appetite is the direct result of misinformation disseminated by the governor, the lapdog journalism of the state’s two largest newspapers and television media outlets that refuse to report that physicians, hospitals and health care systems in those states that have accepted federal dollars are delivering quality medical care to more people, being paid for that medical care and are not at risk of closing their doors or laying off employees.

Oklahoma hospitals on the other hand are at risk of closing. Doctors and hospitals risk being paid less and co-pays out of the pockets of our senior citizens and Medicaid recipients risk being increased, all as a result of the budget shortfalls that occur as a result of Oklahoma not accepting those federal funds.

Keeping rural hospitals open and keeping low wage Oklahomans healthy is an economic issue. Just one primary care physician in a rural community creates about 23 jobs annually, generates $1 million in wages, salaries and benefits and produces $1.8 million in revenue each year according to the National Center for Rural Health Works. Think of the economic impact of a clinic or an entire hospital.

Acceptance of those same federal funds would also improve the health and reduce absenteeism among those low wage employees whose employers say that they cannot afford to pay for their employees’ health insurance.

How self-centered have we become as a state when we tell working Oklahomans that even though their job does not carry health insurance and their salary is not sufficient to purchase health insurance, we are going to refuse to accept federal dollars designed to keep them healthy?

Oklahoma’s health could be better. Instead, we jam the airwaves.