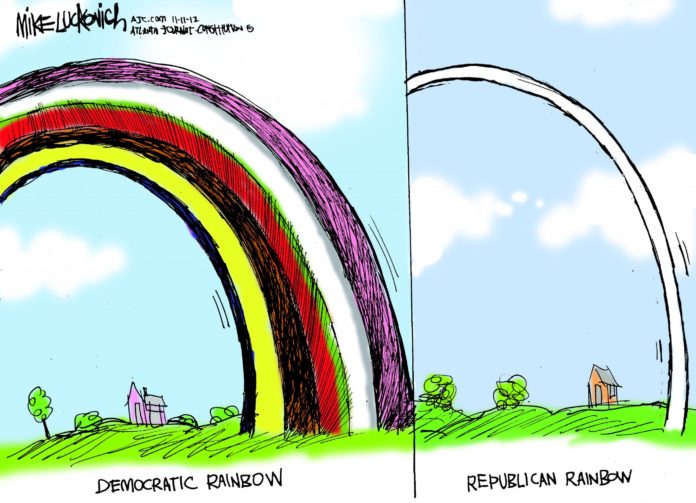 Rediscovering The Art Of Governance

Bobby Jindal, the Republican governor of Louisiana, recently published an essay wherein he suggests several ways for the Republican Party to change and become a party of governance instead of one trying to create a beauty contest every year with no beauties.

He begins his essay with the usual canards we’ve come to know as false:

So, after flashing his GOP credentials he gets down to reality.

“We need to modernize, not moderate. Here are seven lessons Republicans should learn in order to move forward.”

1. Stop looking backward. We have to boldly show what the future can look like with the free market policies that we believe in.

I think the 1920s and the 2000s showed us how well this worked out. Free market policies do look backward. They didn’t work then and they won’t work now. Supply-Side economics has failed twice. Regulated markets are necessary in a global marketplace or chaos will ensue. See Europe.

2. Compete for every single vote. The 47% and the 53%. And any other combination of numbers that adds up to 100%. President Barack Obama and the Democrats can continue trying to divide America into groups of warring communities with competing interests, but we will have none of it. We are going after every vote as we try to unite all Americans.

This is a real news flash considering that Karl Rove and all the GOP operatives have been creating an us v. them country for 30 years or more. Which communities are warring for competing interests? The unemployed? The poor? Who? Did the Democrats invent the Tea Party?

3. Reject identity politics. The old notion that ours should be a colorblind society is the right one, and we should pursue that with vigor. Identity politics is corrosive to the great American melting pot and we reject it. We will treat all people as individuals rather than as members of special interest groups.

Here is his first major break with the GOP dogma operating since 1972. Holy cow! We are a diverse nation!

4. Stop being the stupid party. It’s time for a new Republican Party that talks like adults. It’s time for us to articulate our plans and visions for America in real terms. We had a number of Republicans damage the brand this year with offensive and bizarre comments. Enough of that.

No kidding. This means divorcing themselves from the evangelical right wing extremists, et al, that push a tax-free religious agenda as well as disconnecting from the Tea Party craziness.

5. Stop insulting the intelligence of voters. We need to trust the smarts of the American people. We have to stop dumbing down our ideas and stop reducing everything to mindless slogans and tag lines for 30-second ads. We must be willing to provide details in describing our views.

Gosh. I hope it’s not about supply-side economics or unregulated free markets. The silence will be deafening. He’s right about insulting the voters’ intelligence, though. The Tea Party showed us all what stupid means. By dumping the GOP sloganeering and admen, unemployment will jump a tenth of a point.

6. Quit “big.” We are not the party of big business, big banks, big Wall Street bailouts, big corporate loopholes, or big anything. Actually, you are, Bobby. We must not be the party that simply protects the well off so they can keep their toys. We have to be the party that shows all Americans how they can thrive. We are the party whose ideas will help the middle class, and help more folks join the middle class. We are a populist party and need to make that clear.

I can’t help but hear the dulcet tones of Franklin Roosevelt here. Is Jindal trying to create a second coming of New Deal populism? This sure sounds like it.

7. Focus on people, not government. We must stop competing with Democrats for the job of “Government Manager,” and come up with ideas that can unleash the dynamic abilities of the American people. We need to lead the way with policies that can create prosperity. We believe in organic solutions, not big government solutions. We need a bottom-up government that fits the digital age. Right now we have an outdated centralized government trying to manage a decentralized economy.

I remember Barack Obama talking about a bottom-up government during the campaign. Jindal is reversing $6 billion worth of campaign hype and rhetoric. Losing will do that, I suppose. The trick here, of course, is to get the “organics” motivated enough to participate in pushing their representatives to “unleash the dynamic abilities of the American people.” Perhaps voting for a jobs bill or two would be a good start.

So, here is one of the bright stars of the Republican Party trying to straddle both ideals of pure conservatism and the necessities to make our nation work. Right now, those ideals are still going in opposite directions [fiscal cliff negotiations], but the Democrats seem reenergized to hold firm and show that just giving in is not compromise just as saying no to everything is not governing.

As the old man of 2012 wanders toward the swaddling babe of 2013, we will see how much respect our elected officials have for their constituents, or will the blush be too soon off the bi-partisan rose and ineffectiveness plunge us into an economic depression?

It would be ironic that the only thing successfully negotiated last summer, tax cuts expiring and spending cuts ensuing, would be the cause of an economic failure when it was intended to do the opposite.

If the cliff is our destiny then it is clear that we have yet to rediscover the art of governance and our Congress will continue to experience single-digit approval ratings from the people and the world.

As Jindal suggests, unless we rediscover our senses and put away the divisive nonsense created by Rove, Ailes, Atwater and their ilk, we may not ever be able to effectively govern ourselves and will end up as another great civilization that failed by its own hand.