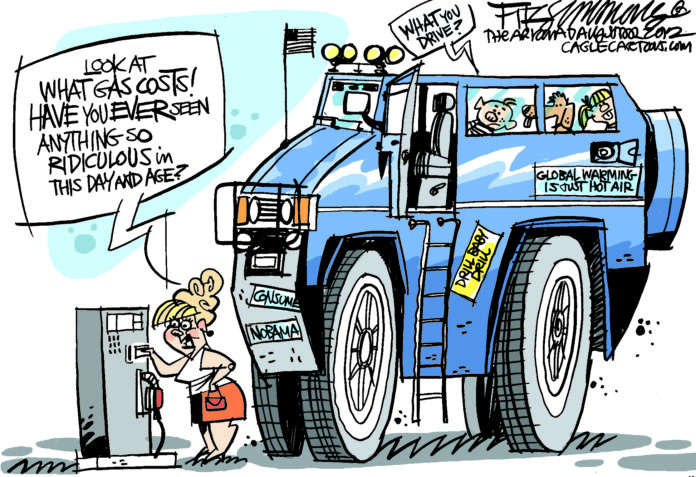 Poor Mitt Romney. He keeps trying to prop up his bad policy proposals with gimmicky political props that flop.

He recently unveiled his energy policy, for example, in Hobbs, NM, rather than in ExxonMobil’s boardroom, which is the only place his oil-soaked proposal would actually receive genuine, full-throated huzzahs. But a group of hip-hip-hooraying fat-cats in suits is not quite the down-home, regular-guy image that Mr. Multimillionaire is presently trying to project to voters.

Thus, like a flimflam man pitching snake oil, Romney set up an outdoor stage in front of an oil rig in Hobbs, and a local industry chieftain assembled an audience of workers in hard hats to be his regular-guy props.

To add to the hype, he had a chart with a bar graph onstage with him, supposedly to give a smear of credibility to his wondrous claims. However, the chart was too small for the audience to see, plus the wind kept threatening to blow it off the stage. No problem, though – Romney just faked it.

“On the left hand side,” he flimmed and flammed, “you see a bar there that represents, you can’t read the writing, it’s too far back, but I can read it … so I’m going to tell you what it says.” Then he concluded with: “As you can see” – even though people could not see it. It was perfect PR puffery.

Only, it didn’t work. As he pitched a policy that literally had been written by Big Oil drillers, frackers and pipeliners, his audience of hard hats looked on in bafflement. It was as though they were watching a rich financier and buddy of the bosses trying to sell them a pig in a poke – which is exactly what they were selling.

Romney failed to mention it during his show-and-tell flimflam routine, but on his way to Hobbs, he stopped in Texas, where he picked up a cool $7 million from oil executives at an industry fundraiser. Now that’s the genuine Mitt.

And speaking of oil executives, past and current, pro-oil energy policy promoter Dick Cheney is known to snarl more than he smiles, but the former VP and ex-oil executive must be grinning from ear to ear now that Mitt has issued his energy plan.

By “his,” I mean Cheney’s – the one he drafted in secrecy with a cabal of industry chieftains a decade ago. They couldn’t get all of their agenda enacted, however, so imagine their excitement over Romney’s recent proposal, which out-Cheneys Cheney.

In a breathtaking surrender of America’s energy future to Big Oil profiteers, Romney revives the maniacal fervor of the “drill, baby, drill” crowd, pushes “fracking” with a vengeance, runs the filthy Keystone XL pipeline right through the heart of America, zeros-out federal tax credits for wind and solar alternatives to oil, and maintains the $4-billion-a-year subsidy for oil corporations – among other giveaways.

Then he doubles down on energy stupidity by undoing Teddy Roosevelt’s logical decision that our national lands should be under the control of … well, national policymakers. Instead, capitulating to industry’s wildest dream, Romney would cede control over drilling and mining on nationally owned public land to the various states, most of which are run by industry-coddling, corporate-financed politicians.

It’s like asking a coyote to guard your last lamb chop!

Who wrote this “plan”? Harold Hamm, for one. CEO of Continental Resources, an oil and gas fracking corporation, this Oklahoma billionaire chairs Romney’s energy advisory committee. A campaign aide insists that Hamm and other industry executives [who showered Romney with over $10 million in campaign funds in August alone] were allowed to write the policy not as payback, but “simply to tap their expertise.”

Uh-huh. Expertise at serving their own interests, our national interest be damned.