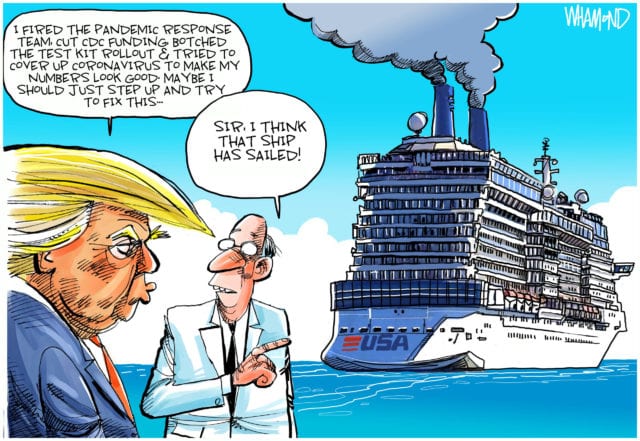 Once again, the whole world is at war.

It’s hard to fight an enemy you can’t see, whether it’s a virus or misinformation. Truth is our first line of defense, and in the U.S., the line has been breached.

On page two of an area newspaper, the whole page, except for ads, was an editorial rant about “the overreactions to coronavirus being fanned into a fire by global media giants.”

The author pointed out that nobody knew the death rate “because nobody knows how many people have contracted the virus.”

No kidding! Even people with respiratory issues and symptoms can’t get tested in the United States. At least Oklahoma had the resources to test 58 players and staff on an NBA team.

Did testing the basketball team save lives? Yes, because it prompted the NBA to shut down its season. Testing the rest of us when we have symptoms will also slow the spread of the virus. In wartime, information is power.

Right now, we are in the dark either because of incompetence or because the administration wants to keep the numbers of confirmed cases low.

Mr. President, we can keep actual cases lower when those with the virus are aware of their status and self-quarantine.

Quarantine! The editorial called that word a scare tactic. “If you are healthy, and catch COVID-19,” the editor wrote, “your chances of survival are as good as they would be with seasonal flu.”

Wait! I thought we didn’t know the COVID-19 death rate.

There’s also the matter of refusing the WHO test kits. Why? Could it be that American companies, and the legislators they own, put profit before people’s lives? When will those commercial tests be ready?

According to health experts, flu kills less than 1% of infected people over the age of 65. The death rate in China among the oldest population reached almost 15%. Even among young people, the death rate for COVID-19 is 10 times that for flu.

Maybe it’s time to panic. Better yet, let’s self-quarantine, even if the president and the governor won’t. Let’s take matters into our own hands, stock up on beans and rice, and stay home while our leaders fiddle … or play golf. Let’s lend a hand to our fellow citizens who may not have the resources to stay home.

Journalism demands truth. So does statesmanship. Politicians and small town editors need to quit politicizing and start telling the truth. Legislators need to pass emergency measures to save lives. If they aren’t going to help us survive this pandemic, they can at least stay quiet and get out of the way.