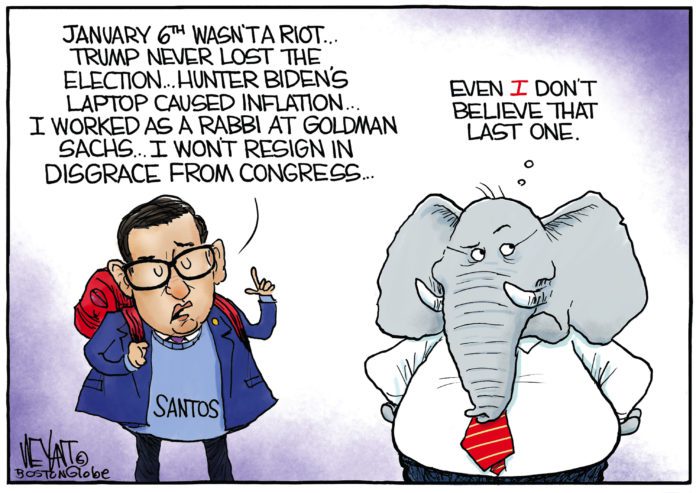 Say Anything, Spend Any Amount, Reveal Nothing

Hell, I’m surprised anybody votes anymore. This article about newly elected New York Republican Congressman George Santos says it all about what is wrong with today’s election system. It is dominated by dollars and deceit as declared legal by our own United Citizens Supreme Court in the landmark 2010 decision known as Citizens United.

What newbie lawmaker Santos pulled to win a seat in the closely divided House of Representatives is disgusting but hardly unique. Super PACs exist by the thousands; are mostly unregulated; certainly not understood by Joe Citizen; now dominate the financial battlefield; and may be the major reason Americans vote less in a free society than most all countries in the world.

However, rest assured, I’m not worried about this fellow’s voting record in the Congress currently numbering 222 Republicans and 212 Democrats. Why? Even though House Speaker Kevin McCarthy, R-CA, is firm in refusing to have his colleagues throw the bum out, that’s not how he will depart. It will be the eventual revelations about where, how, who, what and why swirling around those large and mysterious contributions that will get him.

After all, even with Citizens United, there are some limitations about how candidates can spend, if not raise, money in politics. Mostly his downfall will be tied to state and federal tax law, which is separate from other nauseating yet legal behavior in getting elected and re-elected.

Money, as somebody really famous once said, is the mother’s milk of politics. However, in olden days, before the Supremes rewrote the rules of the road, candidates and incumbents only suckled on it.

Now they bathe in it, sometimes drown in it and, thus, that will be what sends Santos back to New York City with his eventual final location being either at Rikers Island for a state conviction or more likely a federal pokey for income tax evasion.

However, if he is really lucky, he’ll just cop to a plea agreement and resign first, pay a fine and then become a campaign consultant where it won’t matter whether he is Jewish, a college graduate or even an American but he will be able to honestly say he is a former congressman.

And now a footnote from Oklahoma history.

Way, way back in the 1950s and ‘60s, there was an Oklahoma House Speaker named J.D. McCarty who was a helluva politician as well as a good friend. The reason I bring up his name tied to this story is Speaker McCarty did go to federal prison for a year or so. His conviction was for income tax evasion and why so?

He didn’t report the cash he was given by the Oklahoma City Chamber of Commerce for the purpose of paying for rooms at the Huckins Hotel for legislators who came from rural areas of the state during legislative sessions. After all, those guys were only paid $2 a day to be lawmakers and obviously that didn’t cover lodging, food, hooch, etc., so the Chamber wanted to make them feel comfortable and, anyway, cash was the coin of the realm back then.

McCarty did his time without complaint except one. The food was terrible in the federal lockup down in Texas. So a great American most of you readers have never heard of used to sneak in cheeseburgers to J.D. to fortify him during his stay. Only under great demand will I reveal that person’s name publicly but for a cheeseburger at Edna’s I’ll write his name on a napkin in ink that quickly disappears.

Some things change. Some things don’t. When it comes to money in politics the only difference is the amount. See you at Edna’s. And by the way, bring cash. No credit cards please.