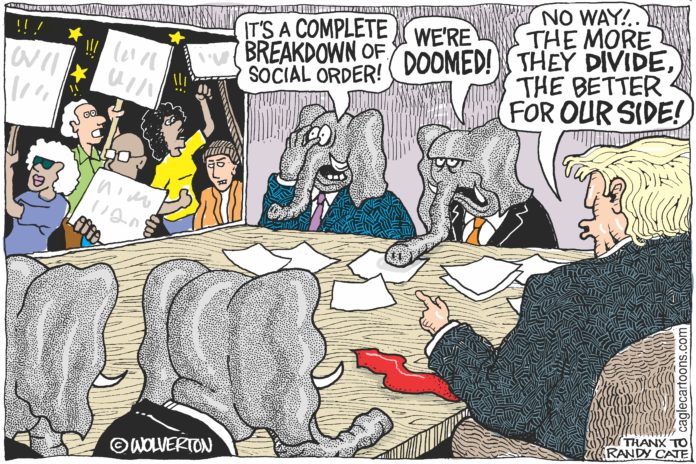 Donald J. Trump opened his 2020 re-election campaign in Tulsa on Saturday to a less than capacity crowd at the BOK Center amidst the COVID-19 pandemic.

Outside, protestors denounced the visit and Trump’s dog whistle politics which have helped enflame racial tensions in the country.

Trump’s speech did not disappoint his fans but was laced with misleading and pseudo-racist remarks.

Trump started the speech by touting his administration’s record in passing huge tax cuts and passing more regulation cuts than any administration in U.S. history.

He claimed that he had helped turn America into the dominant energy superpower of the world and had restored oil prices by calling on Russia to end its dispute with Saudi Arabia which was causing lower oil prices.

Trump continued: “You try putting AOC [New York Democratic U.S. Rep. Alexandria Ocasio Cortez] in charge of your energy. That will make the pandemic look like child’s play to the people in energy. She has one problem, it’s called petroleum. No president or administration has done more in the first 3½ years than the Trump administration. Not even close.”

Addressing the disease pandemic, Trump claimed to have saved millions of lives by halting travel early, said that the numbers were rising because of too much testing, and blamed China, referring to the virus as “kung flu.”

Trump went on to compare his administration’s supposed “incredible success in rebuilding America” with “the violence and extremism and destruction and violence of the radical left;” an “unhinged left wing mob,” which is “trying to vandalize our history, desecrate our monuments, our beautiful monuments.”

The mob, he said, also wants to defund police forces and abolish Immigration and Customs Enforcement [ICE] which take in “the roughest toughest, meanest people that you’ve ever seen or ever heard.”

Presenting himself as a peacemaker, Trump suggested that powerful people associated with the military industrial complex were out to get him because he removed soldiers from Germany and because “they don’t sell a lot of bombs when we’re not dropping bombs on people.”

However, Trump later went on to brag that under his orders, “the heroes of the U.S. military took out the world’s top terrorist, the savage killer leader of ISIS al-Baghdadi and the No. 1 terrorist, anywhere in the world, Qasem Soleimani” – a claim that has little merit since Soleimani was never linked to any specific crimes before his killing.

Trump attacked his Democratic Party rival Joe Biden for opposing the drone strike that killed Soleimani and said Biden was a “puppet of China,” a “trojan horse for socialism” and “a helpless puppet of the radical left.”

The latter claims are ridiculous as Biden supported a military buildup directed against China as vice president, and has often kowtowed to corporate interests, including the credit card industry in his home state of Delaware. [Socialists want to nationalize major industry.]

Trump’s speech generally made for good political theater and hit on many of the themes that have propelled his political career.

He and his handlers clearly understand the centrality of the oil industry to Oklahoma and the public’s distaste for endless wars, which is why he is packaging himself as a foe of the military industrial complex.

Trump’s defense of American monuments and appeal to law and order is part of a Republican strategy that goes back to Reagan, Nixon and Goldwater to win converts among sectors of the population who do not benefit from the party’s economic policies.

Apart from the early reference to tax cuts and deregulation and mention of the recent stock market boom, there was little discussion of economics in Trump’s speech and he did not offer a program to address inequality or the economic despair of a considerable portion of the population.

The reason is that the GOP does not really have one, except to continue with policies that favor the top one percent.

Since any attempt to package themselves as the party of the super-rich would doom them to failure, they need a Trump to rile up the masses, and direct their energies against a string of imagined bogeymen such as the Chinese, “roughest and meanest of people” rounded up by ICE, and radical left.

Trump’s job is also to provoke fear and to create a carnival like atmosphere at his events which make them into a form of entertainment, and himself into a kind of cult-leader.

At the end of the day, there are fascist undertones in Trump’s rhetoric which mark him as a dangerous man. Hitler in Germany too railed against the radical left and stirred up hatred against minority groups including especially the Jews, and we know where that led.