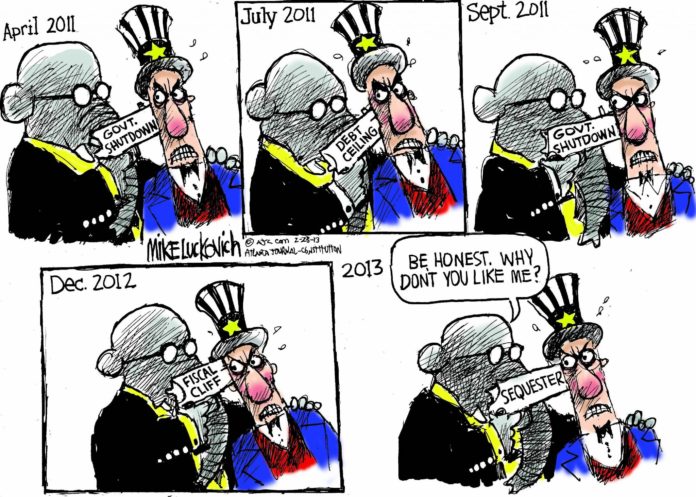 The AFL-CIO group also accuses Republicans of taking the “economy hostage to protect tax loopholes for corporations and [the] wealthy.”

According to the federation’s news release:

The report further proves that Republicans’ insistence on cutting Social Security, Medicaid, and Medicare benefits to pay for tax loopholes for corporations and the wealthiest 2% would directly harm working families.

These drastic cuts would slash nearly $12,548,429 from Title 1, the largest federal-funded education program in the United States, meaning schools would be left struggling to pay for teachers and tutors. Critical grants for public safety would be cut back by $566,960, leaving fire departments understaffed and working without necessary, critical equipment.

“Yet again, Republicans in Congress are threatening to throw the economy back into recession unless Democrats agree to benefit cuts to Social Security, Medicare, and Medicaid,” said Tim O’Connor, President, Central Oklahoma Labor Federation AFL-CIO. “They are willing to allow deep across-the-board cuts that hurt working families to go into effect rather than close wasteful tax loopholes and demand corporations and the richest 2% pay their fair share.

“We need to invest in our economy and our people by creating more jobs, not cutting them. Congress must stop protecting corporations and the richest 2% and cancel the sequester immediately.”

The full report can be found at http://www.harkin.senate.gov/documents/pdf/500ff3554f9ba.pdf

Facebook
Twitter
Previous articleWhile Republicans Warn Against ‘Greece,’ That Is Exactly Where Austerity Budgeting Will Lead U.S.
Next articleThe Politics Of Sequestration