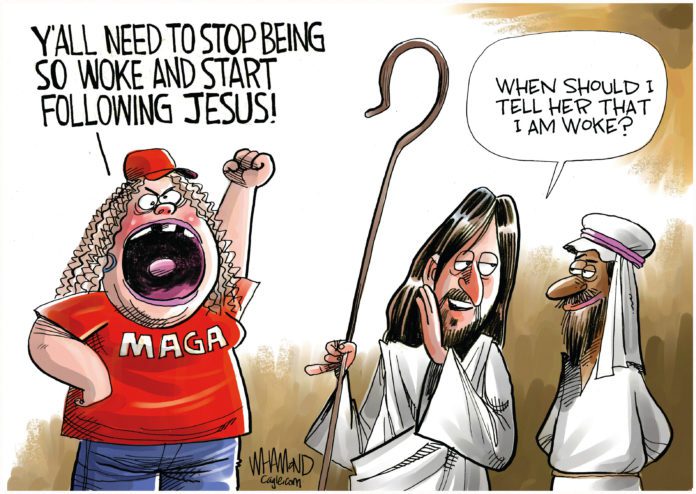 Christmas comes but once a year. It must be a strain for American political Christians to spend a few weeks spouting tidings of good cheer to all of humanity. I guess they can sigh with relief now and return to hating those they consider strangers.

But the white nationalism that many of them espouse reflects an ignorance bordering on determined stupidity.

More than 400 years ago, the poet Edmund Spenser observed, “I think there is no nation in Christendom, nor much further, but is mingled, and compounded with others.”

He wrote this acknowledgement of genetic diversity [long before such terminology existed] in A View of the Present State of Ireland, which was a call for the ruthless ethnic cleansing of Ireland so it could be settled by civilized Englishman such as himself. [Reciprocating his feelings, Irish rebels burned Spenser’s Kilcolman Castle in 1598.]

In his Seven Daughters of Eve, Oxford geneticist Bryan Sykes confirmed Spenser’s observation, pointing out that six of the seven haplogroup “daughters” whose descendants settled Europe are evenly distributed throughout that western Asian peninsula as opposed to the late-arriving seventh group found today mainly along the western fringes.

Sykes identifies 33 such haplogroup mutations that people Earth. Whether you believe it was 6,026 years ago in Eden – according to Bishop Ussher and proclaimed by political Christians – or accept the science that it was 150,000 to 200,000 years ago in East Africa, every person on Earth today is related to every other. Cousins.

Europeans were “mingled and compounded” long before they crossed the Atlantic – where some of them contributed 25% to 30% of the DNA to most African Americans.

Scientists call our single female progenitor Mitochondrial Eve. They say that this woman was one among several other human women at the time. Over the generations, the mitochondrial DNA which she passed to at least two daughters was the only such DNA to survive. She is our first common ancestor.

This year’s Nobel Prize in Physiology or Medicine was awarded to Svante Pääbo for his work that established the Denisovan presence in antiquity – and the persistence of both Neanderthal and Denisovan DNA in modern humans.

But as our ancestors spread out into extended families and clans, those clans began viewing each other as rivals for resources – “others” – as well. Isolation led to an insulation. Loyalties were local.

Well, we’re not so isolated these days. Pushing past eight billion homosapiens, it is time to utilize that alleged sapience. Our fierce loyalty to our local group must acknowledge that this local group now includes every cousin on our crowded planet.

Austrian-Israeli philosopher Martin Buber summed up the needed image in his book, I and Thou. Modern English has jettisoned its “thee” and “thou” distinctions in favor of an ubiquitous “you.” The key is that “thou” is subjective [“Thou Swell”] and “thee” is objective [“Of Thee I Sing”].

Buber and others maintain that human interactions require subjective equality over objective otherness. Family members – as we all are – are not adversaries even though reactionary haters keep spewing that destructive nonsense for their own aggrandizement.

The country would be better served if those who politicize their religions would convert their platitudes into working attitudes. Those neighbors we are supposed to love are, in fact, cousins.

We need to cooperate, not compete, in order to preserve the only Earth we share – and ourselves as well.