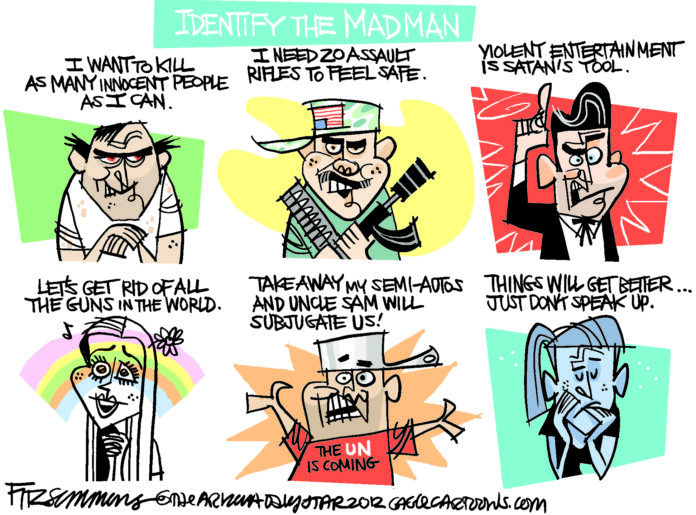 Everyone from Mike Huckabee to the raving Texan, Rep. Louie Gohmert, say we should not talk about guns at all because the mass shooting in Colorado was because of sin and Gohmert believes it is the idea that we have absolutely kicked God out of the US of A God’s judgment is upon us.

The first thing I need to point out is the USA is way ahead of all of these countries, except Mexico, in the number of murders regardless of the weapon. I am using the latest statistics published. The U.S. is No. 1 with this group and No. 4 in gun murders in the world with 9,369 and our nearest competitor in the group is Mexico with 2,606. Our other neighbor, Canada, has 144.

I don’t think that is what Huckabee, Gohmert and most of the right of the GOP are talking about.

We are just not giving God the attention he deserves. We have the highest number and percentage of citizens who claim to be Christians, 249 million and only Ireland and Poland have a higher rate of church attendance.

Of these countries France has the most who confess to be atheists, meaning they believe in no form of God or Spirit and they are 14 on this list in numbers of murders. If 33% of the population of France believes in nothing and 98% of the U.S. population is Christian why aren’t more people dying in France from gun violence.

Incidentally, a large number of the countries I am using, the GOP calls Godless socialists. Maybe God just likes socialists because less of them are murdered. We are second from the bottom in the percentage of Muslims.

Maybe it is a different sin they are talking about because we are more Christian and we are better church attenders. Rev. Fred Phelps, to a much larger extent than Huckabee or Gohmert, says it has to do with coddling of gays. Of the countries I included Denmark, Sweden, Norway, the Netherlands and Spain have no restrictions, whatsoever, on homosexuals. These countries had 184 gun murders combined and we had over 9,000. We need to be a whole lot more gay friendly, just to save lives.

What kind of sin could it be because we are just getting hammered in the murder department? We are No. 1 in divorce for the entire world, but not every couple can get married in the USA. That is primarily a heterosexual problem and there are a lot of Christians who have been divorced. Could too many divorces be causing things like what happened in Colorado?

The USA has about five homicides by firearm a year per 100,000 citizens. We are No. 1 in gun ownership, 89 out of every 100 citizens owns a gun and most are not hunters. There are 270 million legally owned firearms in the USA, including all four used in the Colorado shooting.

In the last few years there have been stories about churches giving guns as awards for bringing the most visitors to church. We have a legislator in Oklahoma, Rep. Sally Kern, a Baptist preacher’s wife, who has been caught twice bringing her gun to work with her at the state Capitol.

Just hear me out: I think there could be a lack of faith problem here. I do know the GOP, with a lot of Christians following, spends a huge amount of time scaring people into buying guns.

Paranoia reigns, which is a lack of faith.

One last point: the USA is third in the number of children living in poverty with 22.4% and we are No. 1 in the number of millionaires. There are three million millionaires in the USA. We have 29.7% of the world’s millionaires and 22.4% of our children live in poverty. The minimum wage has not gone up in a long time and the reason the GOP gives for that is, if the minimum wage goes up they can’t hire people and they may have to fire people. Tax cuts are not what makes any business hire people, more customers is what makes businesses hire people. “If you have done it unto the least of these, you have done it unto me” and the can’t seem to stop doing it.

The reason we have more murders is because we have a lot more guns and we think guns are the answer. They aren’t.

Gohmert went on and on about neglecting God and then said he didn’t understand why more people didn’t have guns in that theater. They should have shot him before he shot so many people, Gohmert said.

The shooter was in protective clothing, was shooting with a hundred round clip, it was dark and he had thrown a smoking device. If the theater had 300 seats and 89 out of 100 U.S. citizens own guns, there could have been 267 heroes, with a minimum of 1,602 possible rounds shooting at each other.

Can you ever have too many armed heroes in a packed, dark theater? You can’t kill or injure 71 people with a knife, baseball bat or most other weapons. You could use a bomb, but most USA mass killers prefer being shot.

I know there will be people wanting me to say something about abortion. The only way to prevent abortion is to prevent unwanted pregnancies. That is done by teaching every form of birth control. What is the point of bringing more children into the USA when a quarter of them will be living in poverty. We are high on the list of child abuse and children going to school hungry.