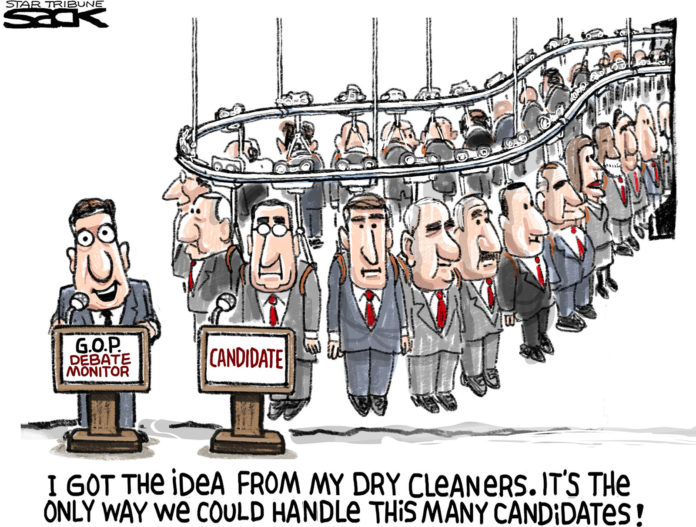 BY SHARON MARTIN
Here are a few highlights from Fox’s presidential debate:

It is important to listen to all the candidates. Jon Stewart reminded us in his finale, however, to keep our bull-hockey detectors running.
John Kasich explained why he agreed to accept the Medicaid expansion in his state. HE feels it was the Christian thing to do.
It was a brave answer, and there were the inevitable boos. But he got cheers when he said that if one of his daughters were gay, he’d love her unconditionally.
Rand Paul rolled his eyes at and sparred with his opponents, but he was right on when he pointed out that we created ISIS. They’re driving around in our Humvees, he said.
He scored points with libertarians when he said he didn’t want his guns or his marriage registered in Washington. Of course, he doesn’t want Washington interfering with education or hungry babies either. I’m not sure he sees the fine line between libertarianism and anarchy.
Ben Carson pointed out that he didn’t talk about race because he was a neurosurgeon; he operates, not on skin, but on the things that make us who we are.
Cruz, Walker, Rubio, and Huckabee had their rehearsed and purchased answers. But Rubio slipped when he showed empathy for college grads with student loans.
Four years ago, he said, I owed over a hundred thousand dollars. Four years? How did he get his loans paid off so quickly?
As for Christie, the crowd still holds it against him for buddying up to President Obama in the aftermath of Sandy.
Jeb Bush had the most honest answer on immigration. This balanced his dishonest answers about education.
I didn’t file bankruptcy, Trump said; my companies did. I only took advantage of the law. Yes, and of stockholders and creditors.
Huckabee’s commentary on Social Security and Medicare involved prostitutes and pimps. That should go down well in Florida.
Here’s the take-away:
They all talk to God on a regular basis, but only a couple seem to be listening to what God is saying back.
We must cut the deficit and quit spending money on worthless stuff like clean air, healthcare, and education.
We have to strengthen the border and our military, presumably while cutting the aforementioned deficit.
The few feel-good moments weren’t enough to rid me of a nagging fear. Jon Stewart’s farewell, despite his good advice, didn’t help.