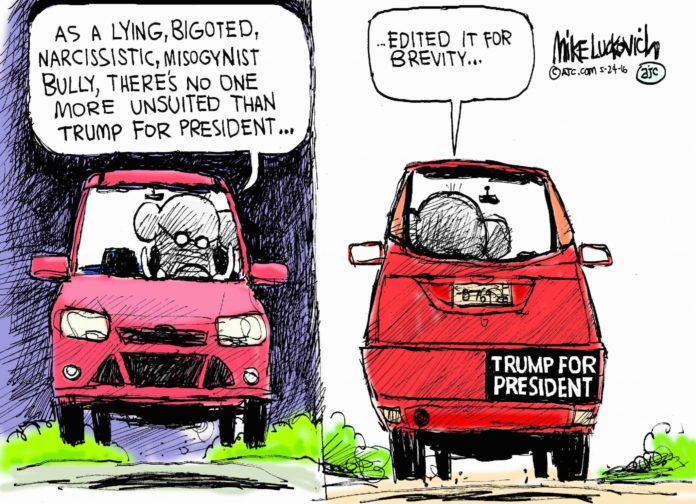 Listening to the chairman of the Republican Party a couple of Sundays ago, two things were clear:

1. Power is more important to the Republicans than policy or people.

2. The GOP holds the Clintons to standards that they reject for themselves.

In one sentence Reince Priebus said that we shouldn’t be bringing up old news about his candidate when what we should be talking about is what happened at Benghazi.

That’s right, Chairman Priebus. Divert our attention from the warlord who wants to make this country great again for white men.

New voters are flocking to the polls. They say they are sick of the lying and the spin. But they buy into the spin. And they believe the lies.

A relative explained to me why he couldn’t vote for Hillary.

“She was fired from the Watergate investigation for ethics violations.”

When I pointed out that Snopes labeled this false, and suggested that Mr. Zeifman must be lying, especially since he was in no position to fire Ms. Rodham, he had an answer.

“Oh, it’s everyone else who’s lying about poor Hillary.”

That’s exactly what I was saying.

Here’s the deal: the truth is the truth even if you don’t want to believe it.

There are problems with the two-party system. Some people can’t vote in the primaries. Some people’s votes are worth more. The wealthy can buy power. There is room for new voices and new ideas. But for now, there is only one party who looks after the poor and middle class. Hint: it isn’t the one whose candidate made it “on his own with only a small loan of a million dollars from his dad.”

Inherited wealth doesn’t disqualify him. No, it’s his complete disregard for anyone’s opinion but his own, his lack of impulse control, and his belief that his mistakes don’t matter.

If he’s president, they will matter a lot. We will be the ones who pay for them.

Our mistake will be listening to the spin and believing the lies. The mother of all mistakes would be to elect Donald Trump as president.

Facebook
Twitter
Previous articleWhen Is A Tax Not A Tax?
Next articleThe Cure For Expensive Cities Is Moving Vans