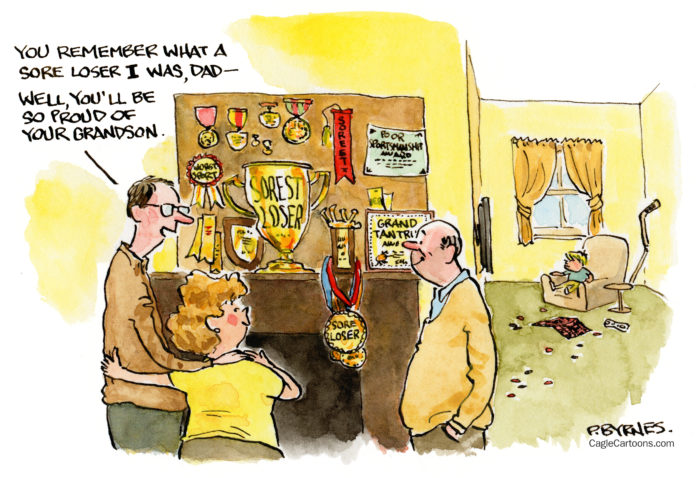 I’ve been watching and participating in elections for about 60 years. During that time, my favored candidates have won lots of times and lost lots of times. Obviously, winning is more fun. But losing builds character in the loser and also reveals it.

There’s a long tradition of parents teaching their children both how to lose [be a good sport; congratulate the winner] and how to win [be gracious; don’t gloat].

We never enter a race hoping to come in last. One old cartoon depicts the loser of a contest looking skyward, hands clasped, and praying, “Please, no more character-building experiences.”

But what parents teach children about winning and losing is important, one rooted in human history. After any contest, winners and losers need to be able to live together in peace, and both sides have a role in making that happen.

Over the centuries, wars have broken out between human beings who didn’t manage to find a way to settle differences without violence, and people died or were horribly mutilated as a result. But throughout history, what has helped humans survive – enduring famines, tsunamis, plagues, and other threats – was the ability to work together. If I’m about to be swept away in a flood, you throw me a rope. If you’re sinking, about to drown, I throw you one.

We’re herd animals. We like being with other humans, hugging, kissing, high-fiving, patting shoulders, and so on. That’s why living through the COVID-19 pandemic is so difficult.

Epidemiologists tell us we need to “socially distance” and wear masks that hide our smiles from each other, both of which go against human nature. But in order to survive Covid, to keep from spreading the virus among ourselves, we need to follow that advice. Doing so can literally mean the difference between living and dying, for ourselves and those around us.

We’ve just been through another election, and both sides are dealing with the results. Some of my favored candidates won, some lost. Being on the losing side means that I grieve the fact that a candidate I thought highly qualified won’t get to take office, but I accept that more people wanted the candidate I considered less qualified. That’s life. Maybe next time my candidate will win that seat.

Being on the winning side means that I shouldn’t forget how badly it hurts to lose, that I mustn’t “rub it in.” I think a prayer by Peter Marshall, the popular chaplain of the U.S. Senate years ago, can be adapted for this situation.  Marshall prayed: “Lord, where we are wrong, make us willing to change; where we are right, make us easy to live with.”

No, I’m not saying that winning an election means one was necessarily right to support the candidate we did, and losing doesn’t mean one was wrong. But the prayer could be revised this way: “Lord, when my candidate loses, help me accept the results even when I’m sure my candidate was better; and when my candidate wins, make me easy to live with.”

That’s what we all need to do for each other right now: Accept the results and try to be easy to live with.