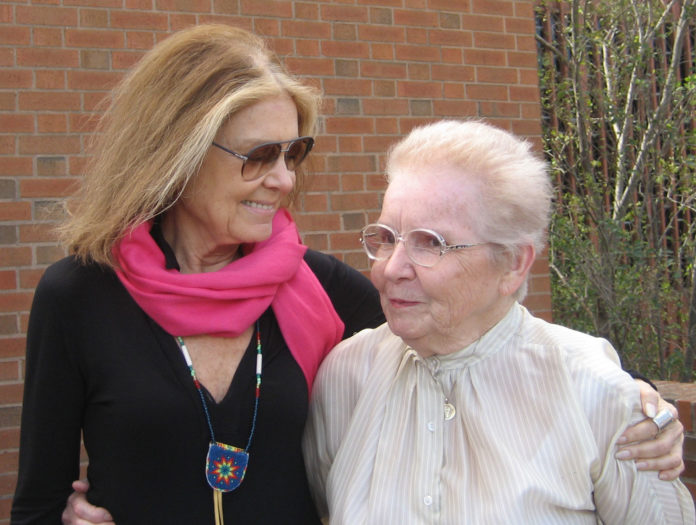 Our blood-red, Republican Oklahoma for awhile turned a tantalizing blue [in my mind, at least]  last Thursday.

During her reflections at the memorial tree-planting [of a Cherokee dogwood] Steinem recalled how she and Mankiller had met about 30 years ago and had formed a close, enduring friendship.

In fact, Steinem was married to David Bales in Mankiller’s home in 2000, with Charlie Soap, Mankiller’s husband, helping to officiate.

Charlie Soap also had a prominent part in the tree-planting ceremony.

First, he conducted the “Cedar Blessing.” Cedar is a wood known to the Cherokees for its purity and sacredness. Charlie built a “cedar” fire in a small, round vessel. Smoke soon poured from the sacred fire.

Then Charlie used what looked like huge feathers to direct the smoke onto the bodies of those who were to speak – thus blessing and purifying the speakers, including himself.

When finished, Charlie stepped up on the podium and told the crowd about his and Mankiller’s first date. They had worked together for months helping lay a 16-mile pipeline so that the Cherokees in the Bell community could have running water. He finally got up the nerve to ask her to go with him to Tulsa, from Adair County, to dine and see a movie.

After a couple of days to think about it, she said “yes.”

Upon arriving in Tulsa, he pulled into a Coney Island-type place and ordered foot-long hot dogs. Then they saw  the movie “Rambo.”

En route home, he asked her how she liked the hot dogs and the movie. Her answer: “They were awful!”

Little did Charlie know that he was going to marry the woman to whom President Bill Clinton would present the Presidential Medal of Freedom in 1998.

Another of Mankiller’s awards was Ms. magazine’s Woman of the Year in 1987, a publication co-founded by Gloria Steinem.

Mankiller rose to international prominence despite frail health that grounded her from time to time. She died April 6, 2010 at her home located near a spring of water which she loved, close to Stilwell in Adair County.

Gloria Steinem travelled to Adair County to be with Mankiller in her final days and to help memorialize her dear friend of three decades – just as she did for the Oct. 6 memorial tree planting ceremony on the Oklahoma City University campus.

Steinem also helped with the “first watering” of the tree with water from that beloved spring in Adair County. Finally, she helped  spread soil around the tree from the banks of that spring – soil on which Mankiller’s ashes had been spread after her cremation.

In conclusion, these two powerful symbols of achievement for women everywhere helped turn Republican, red Oklahoma to a serene blue for a little while, if only in my mind

– Wanda Jo Stapleton, a former Democratic state representative from south Oklahoma City, is a regular contributor to The Oklahoma Observer