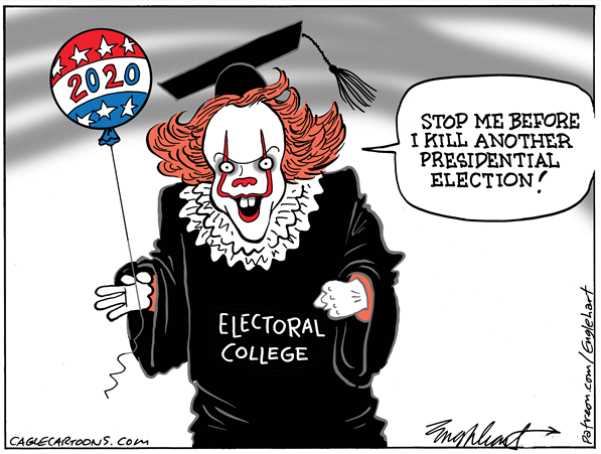 Stop Worrying About The Electoral College

People keep talking about about a Republican advantage in the Electoral College. I say nonsense.

It’s not a sure thing, but since the popular vote has been recorded we’ve had 49 presidential elections and only four have seen the popular vote winner lose the Electoral College [EC] vote. I’ll come back to those four later but first I’ll discuss the swing states. There are only about a dozen real swing states in presidential elections. I’ll make it a baker’s dozen of 13 here. I’ll mention a few more that aren’t really swing states but maybe of interest.

First, the swing states won by Hillary Clinton in 2016. I discuss these first because I believe Joe Biden won’t lose any of these. I’m speaking here only about presidential elections, not other elections, and I’ll speak mostly of the last five elections. Before that, the elections are too far in the past and conditions were different.

COLORADO [nine EC votes]: I’ll speak here about states that “beat the spread.” I like to borrow the phrase from the gambling world. Colorado went for Clinton last time by almost 5%. Thus, Colorado “beat the spread” since she won the national popular vote by only 2%. A state beats the spread when the Democratic nominee has a better margin in that state than in the nation. Colorado has gone for the Democrat each of the least three elections and I feel safe in saying it will again – probably Biden.

MINNESOTA [10 EC votes] has gone 5-0 for the Democratic nominee in the last 20 years. In fact, Minnesota hasn’t gone for the Republican since before I was voting [Nixon in ’72]. The most recent poll showed Biden moving way ahead. I had been a little worried but now I say – probably Biden.

NEVADA [six EC votes]: Another state like Colorado that seems to be moving toward the Democratic Party. As with Colorado, 3-2 in recent years and three straight for the Democratic nominee. Failed to beat the spread last time but polls have Biden up by six as I write this. It went big for Obama. I say – leans Biden.

NEW HAMPSHIRE [four EC votes]: Same situation as above but 4-1 recently. Voted for Bush over Gore, another state that could have given Gore the election. Leans Biden.

NEW MEXICO [five EC votes]: Like the others except that Hillary Clinton won big there last time and it’s 4-1 Democratic in the last five presidential elections. Went for Bush against Kerry. More solid than the three above it’s definitely probably Biden.

VIRGINIA [13 EC votes]: Like most of the above states it’s been getting better for Democrats. Actually had a bigger margin for Clinton last time than Obama in 2012. Probably Biden.

ARIZONA [11 EC votes]: As I write this [late September], the polls have Biden up five. That really shows the situation for Trump. I really don’t think of Arizona as a swing state [0-5 lately], though Bill Clinton won it once with Perot in the mix. I say if Biden wins big, Arizona might go his way, too. This illustrates my key point: In a close race the swing states are a coin flip; they can go either way but if one candidate wins fairly big then other dominoes will fall. Nationwide, I believe the race will get close and Arizona is … probably Trump.

FLORIDA [29 EC votes]: Pretty much a must win for Trump. It’s gone 3-2 Republican in the last five presidential elections. We remember hanging chads. Clinton lost it by a bit more than a percentage point. At the moment polls have Biden up 1½ points, but I say it’s leaning Trump.

IOWA [six EC votes] went Republican in three of the last five, but had the biggest swings of any state. In 2012 Obama won it by almost six points. In 2016 Clinton lost it by more than nine. It’s the only state I consider a swing state that Trump is leading at the moment. I say it’s leaning Trump.

MICHIGAN [16 EC votes] has been a good Democratic state – four of the last five presidential elections. It went Trump last time but the polls now have Biden up by almost five percentage points. I say probably Biden.

OHIO [18 EC votes] is 3-2 GOP in the last five presidential elections. No Republican has EVER won the presidency without carrying Ohio. Trump probably needs BOTH Florida and Ohio. It’s leaning Trump.

PENNSYLVANIA [20 EC votes] is 4-1 Democratic in the last five presidential elections. For me this was the big upset of 2016. It’s often been close, but in close elections it went for the Democrat going back before I was born. This time I think it’s back, though Biden is up by only four percentage points. Leaning Biden.

WISCONSIN [10 EC votes] is 4-1 for Democrats in the last five presidential elections. This year’s polls are looking good for Biden and it has a good history for the Democrats. Probably Biden.

Some states I do not consider swing states but are solidly Republican unless Democrats win big:

GEORGIA [16 EC votes]: The last five Democratic nominees are 0-5 in the Peach state. Clinton lost by five percentage points. It may be moving our way but unless Biden wins big it’s a Trump state. Near lock for Trump.

North Carolina [15 EC votes]: The Democratic nominee has carried the state in only one of the last five presidential elections. Obama won it once and Clinton was within four percentage points, but unless it’s a big Biden win nationally, it’s probably Trump.

TEXAS [38 EC votes]: The last U.S. Senate race makes it seem possible, but Clinton lost by nine percentage points and Obama didn’t get that close. I might live long enough to see a Democrat win it, but this year it’s a near lock for Trump.

Two states are not swing states but they have swing districts: Maine and Nebraska allow each congressional district one vote. Obama won one of the Nebraska votes in 2008. Trump won one of the Maine votes in 2016. A poll of that district has Biden ahead at this time.

Four more elections had a margin of more than one point but less than three, including, of course, 2016 – the ninth closest election by popular vote percentage: 2.09%.

In a close race the swing states are a coin flip but as the margin widens the swing states follow. A margin of less than 3%, though, would give Trump a chance but only a small chance. I point out that only Tilden lost the Electoral College while winning a majority of the popular vote. Grover Cleveland, Al Gore, and Hillary Clinton all received less than 49%. I point out, too, that Clinton’s was the worst showing of the four because she had the lowest percentage of the vote.

That brings up one other factor that might make a difference: in 2016 more than 5% of the vote went to third-party candidates. [That means also that Trump’s was the worst percentage for a popular vote loser/Electoral College winner] I believe the third-party percentage will be lower this year.

So, I’m predicting a 279-259 Electoral College win for Biden. Some may think I’m biased but I’m actually being fairly conservative here. I’m predicting Biden wins three of those states Trump won four years ago – plus that one extra Maine vote.

If, however, Biden wins all the Clinton 2016 states and adds Pennsylvania and Michigan, plus the one Maine electoral vote, but nothing else, the election could end up a tie: 269-269.

I do believe the national margin will be a little closer than current polls show, but I see little chance of a Trump popular vote win.

That means a probable Biden win, but it’s not a sure thing.

Biden should, by all means, campaign in the swing states [with as much social distancing as possible] but in the end winning big can make the Electoral College vote pretty a given.

The Greens failed to make the ballot in Pennsylvania and Wisconsin so that makes those two states look that much better for Biden. Of course, individual states can change from election to election but as long as Biden wins the popular vote I say he’s a good bet to get that 279. If he wins bigger in the popular vote, other electoral votes are likely to come his way.

I point out that in both 2000 and 2016 the pundits talked about a Democratic ADVANTAGE in the Electoral College. The talk was that Gore or Clinton might lose the popular vote but the “blue wall” was there in the Electoral College. I tried to explain to a few people that neither party has any real advantage in a close race and, of course, in the end it went the other way.

Still, the Democrat has won the popular vote in six of the last seven elections. I think the Electoral College will come our way this time, too.