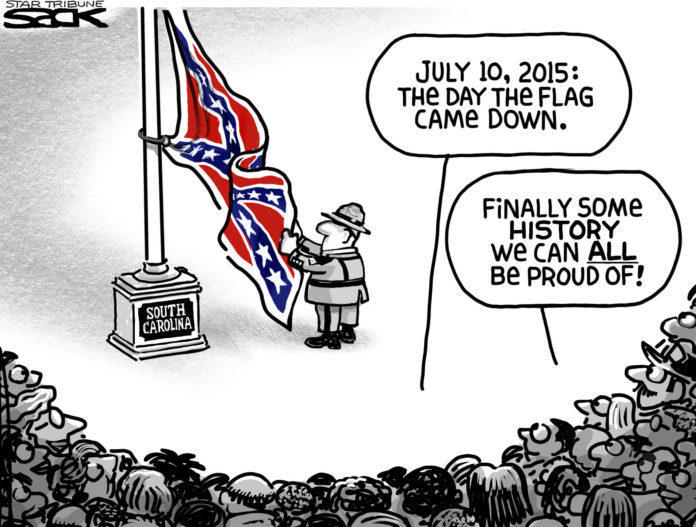 The Confederate battle flag has come down in South Carolina, off store shelves and is going, gone or never coming to auto license plates.

For a majority of Americans, that’s just fine, even if we differ over its meaning. And therein is the real change.

A Newseum Institute national survey released over the July 4th weekend shows that a majority of all Americans agree with taking the Confederate battle flag down from display on public buildings, state-issued license tags, and in stores. But a majority of white and Hispanic respondents, asked what they think when they see the contested flag, still don’t identify it as a symbol of racial bias, even as an overwhelming number of African Americans do.

The national survey was conducted June 26-28 by the Newseum Institute’s First Amendment Center, as part of its annual examination of American attitudes about our core freedoms and related issues.

The results of the special survey about the Confederate flag – with 1,050 adult respondents, done online and with a margin of error of 3% – found that when asked if “government should ban the display of the Confederate flag on any publicly funded structure or flagpole,” 52% of whites support taking down the flag, while 85% of African Americans and 69% of Hispanics support such a move.

Asked if “private companies like Wal-Mart and Amazon were right to say recently that they will stop selling merchandise on which the Confederate flag is displayed,” 57% of whites are in support of removing flag products, with 94% of African Americans and 68% of Hispanics in support.

But the three groups differed greatly when asked to select between three options when “you see the Confederate flag.” Just 18% of whites and 31% of Hispanics saw it as a symbol of “racial prejudice against African Americans or others,” compared to 72% for African Americans.

Finally, 56% of all Americans agree that “government should be able to deny issuing license plates to a group that wants to display a Confederate flag on the plates,” with 44% disagreeing.

The response on auto tags is a reversal of findings from the Institute’s annual, nationwide “State of the First Amendment” telephone sampling conducted in mid-May – before the mass killings in Charleston, SC, by a white supremacist who openly displayed the battle flag. Then, just 35% overall agreed that government should have such authority.

What to think of these survey answers?

For me – I am white – the survey results help explain how this flag, a symbol that I associate more with the forces of bigotry and hate than ancestry and heritage, could survive to still be a state symbol in so many places 150 years after the end of the Civil War. Many people who look like me just didn’t see it “that way.”

What I take away from the survey findings is this: Many more people who look like me “get it,” now and perhaps, finally.

How else to explain what clearly is a massive shift in public opinion and government approval – from Southern lawmakers to national retailers – in favor of taking the flag down?

Just a short time ago, as history measures things, states like South Carolina were raising the flag as a symbol of resistance to federally mandated integration, or they were displaying on T-shirts and Dukes of Hazzard cars as a salute to a rebel culture that was part “Give ’em Hell” and, for some, sending a message to their Northern cousins: “Go to hell.”

For me, the results say that – at long last – the majority is willing to say to a sizeable minority: “OK, even if it isn’t how I see it, I understand that it offends you for reasons I can support – so let’s take it down.”

In a way, the move to lower the battle flag is the long-awaited companion to the now-widespread recognition that once openly spoken racial jokes, blackface performances, and racial slurs – which also didn’t apply to people who look like me – no longer find acceptance among a majority of all Americans.

“Take it down” does not mean “remove it from memory.” Rather, it would seem, the message is, “Take it down as a mantra of hatred, and allow it to remain as a marker in history.”

The flag fight has more rounds to go. Some Mississippi lawmakers say they will push legislation that would remove the Confederate symbol from the state flag. And the flag flap already is being cited in another longstanding dispute – the use of the nickname “Redskins” by the NFL team in Washington, DC.

A statement by the group “Change the Mascot,” supported by the Native American Oneida Nation, said, “We have seen incredible bipartisan progress in recent weeks surrounding the effort to end the promotion, marketing and profiting off of the Confederate flag. … Now, [team owner] Dan Snyder and the NFL must face the fact that the R-word is hurtful and wrong, and that it’s time to do the right thing and change the name.”

There’s no sign that the decades-old dispute over the “R-word” will come to as quick an end as has – at least in South Carolina – public support and official sanction for flying the battle flag.

But the social tsunami of recent weeks in favor of bringing down the flag, culminating in an emotional late-night legislative vote in the South Carolina House, all may signal one more possible change that could be made: To the lyric line in an old tune that begins “Look Away, Look Away, Look Away … ”

For me, the last words in that line now ought to go, “And Look Ahead, Dixie Land.”

– Gene Policinski is chief operating officer of the Newseum Institute and senior vice president of the Institute’s First Amendment Center. He can be reached at gpolicinski@newseum.org. Follow him on Twitter: @genefac