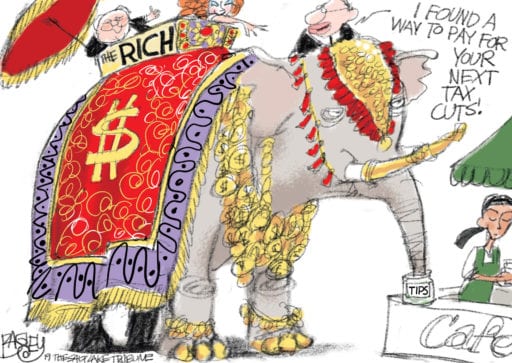 ‘Tax The Rich’ Is No Longer Just A Political Slogan

There’s nothing inevitable about inequality. It’s an injustice that the moneyed powers and their political hirelings have chosen. We the People can choose a brighter path, one that bends toward justice, starting with a wealth tax such as Sen. Elizabeth Warren’s plan to apply a 2% per annum wealth tax only to net worth over $50 million and another 1% to households worth more than a billion bucks.

But how can we best the billionaires who buy the political clout to push through laws that the great majority opposes [such as 2017’s Donald Trump-Mitch McConnell trillion-dollar tax giveaway to the rich] and best their brawny political blockers? Not by going around them but by pushing right through them.

First, years of rank avarice and arrogance have caught up with the superrich and their enablers, turning “billionaire” into a synonym for “thief” and focusing rising public anger on the inequality they’ve fostered.

Second, that anger has generated a stunning level of popular enthusiasm for the wealth tax. A New York Times survey found that six in every 10 Americans favor Sen. Warren’s plan:

Third, not all billionaires are jerks. Eli Broad, a former union auto worker who built two Fortune 500 corporations, is a leader among a small group of superrich Americans who believes “it’s time for those of us with great wealth to commit to reducing income inequality, starting with the demand to be taxed at a higher rate than everyone else.”

He says: “The old ways aren’t working, and we can’t waste any more time tinkering around the edges. … I have watched my wealth grow exponentially thanks to federal policies that have cut my tax rates while wages of regular people have stagnated and poverty rates have increased. … A wealth tax can start to address the economic inequality eroding the soul of our country’s strength. I can afford to pay more, and I know others can too. What we can’t afford are more shortsighted policies that skirt big ideas, avoid tough issues and do little to alleviate the poverty faced by millions of Americans. There’s no time to waste.”

In June, 20 other extremely rich Americans sent an open letter to all 2020 presidential candidates, declaring: “America has a moral, ethical and economic responsibility to tax our wealth more. … [W]e’re joining the majority of Americans already supporting a moderate wealth tax. We ask that you recognize its strong merit and popular support, and advance the idea to tax us a little more.”

So far, most of the Democrats have promised to do just that if elected, with Sen. Bernie Sanders and Warren supporting game-changing tax plans that would shift significant wealth to benefit the poor and middle class. No word from Trump.

“Tax the Rich” is no longer just a political slogan; it’s a national necessity and a moral imperative. And, at long last, it’s actually within our reach. The bulk of billionaires and their right-wing political networks will fight furiously against even the idea that our society should strive for tax fairness. Indeed, their hubris is so extreme that they’re already clamoring for Trump and GOP senators to hand them some $200 billion more in tax cuts this year. But, as columnist Paul Krugman has observed, “they do so more or less in secret, presumably because they realize just how unpopular their position really is.”

More insidious are the out-of-touch establishment pundits and milquetoast Democrats who are aloof from the growing public anger at the raw unfairness of today’s system. They blandly propose small and slow baby steps, policies that would close a couple of tax loopholes without disturbing the basic structure of inequality. If the meek ever inherit the earth, these people will be land barons!

The stakes are enormous, for this is not finally about arcane tax matters but a struggle for America’s essential egalitarian idea that we’re all in this together. The proposal for a bold, unabashedly progressive wealth tax is a rallying cry for grassroots rebels to join forces and work together to reassert America’s historic democratic promise. 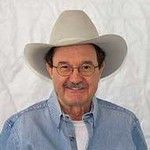