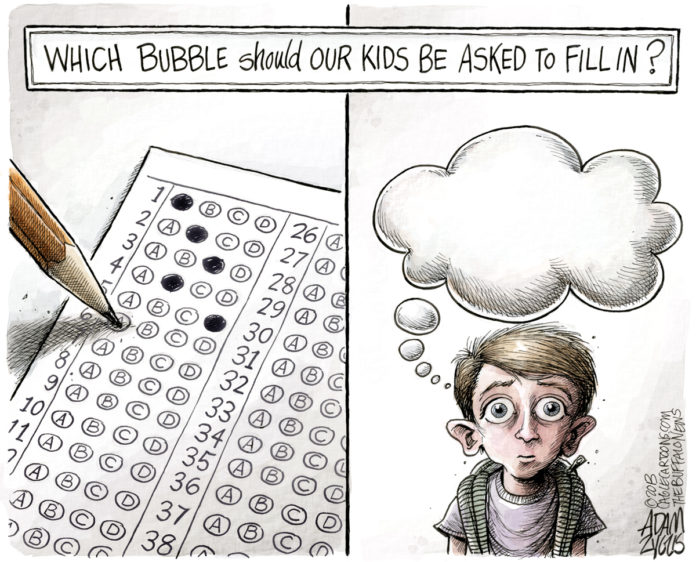 Since education is torn by such a bitter civil war, I must start with a disclaimer about my position on Teach for America. I’m undecided about it but, of course, I am horrified by the teacher-bashing of prominent TFA alumni.

On the other hand, colleagues are colleagues. TFA teachers are teachers. To condemn a TFAer because Michelle Rhee turned corporate would be like castigating a fellow teacher because he supports the Tea Party.

That being said, POLITICO’s Stephanie Simon’s expose of the latest TFA power grab – “Teach for America rises as political powerhouse” – is disturbing.

Simon concludes with an anecdote about Rep. Rush Holt, D-NJ, and his TFA fellow. Congressman Holt received a “really good memo” about “whether we should be paying more attention” to the federal Education Department’s Office of Innovation and Improvement. That office gives out Investing in Innovation grants – and TFA was one of the biggest recipients in 2010, winning a $50 million grant.

Holt was not aware a private individual, a voucher supporter as well as TFA donor, paid Payne’s salary until POLITICO explained the arrangement.

“That’s interesting,” Holt said. “I don’t necessarily see a problem with it. … I will think about that.”

I hope the congressman will learn that many high-profile TFA alumni believe they have a monopoly on good intentions, and their faith in their good intentions supposedly justifies their situational ethics. But in education, as in our democracy, we are all like the blind men “seeing” the part of the elephant we touch.

That is why the spirit of a constitutional democracy must be modesty – we should not be so all-fired certain that any of us know it all.

TFA began as a program that was consistent with the best of American democracy. Talented young candidates committed to inner city classrooms where horrific conditions drove off more experienced teachers.

Like Peace Corp volunteers of previous generations, TFA teachers could then bring their experience in touching the elephant to their subsequent careers.

A cadre of self-righteous true believers, who barely spent enough time in inner city schools to locate the restrooms, decided that they knew how to impose top-down “transformational” change on the entire nation’s education system.

TFA alumni like Michelle Rhee, Kevin Huffman, and John White anointed themselves as the leaders of the “civil rights struggle of the 21st century.”

Despite being blind to education history, the cultures of poor people of color that they sought to uplift, and the social science which explains why their panaceas were doomed, these TFA leaders sought to blow up the “status quo.”

So, some TFA alumni, like many other corporate reformers, are gambling on greater doses of market-driven reform. In defending the ill-advised effort to quietly insinuate its fellows into congressional staffs, and district and state leadership, the TFA co-CEO explained, “We don’t have a choice.” Otherwise, “in 20 years, we’ll just wake up and find … we have made only incremental progress … We’ve got to be aggressive.”

Veteran educators have the right to be angered by such hubris. It illustrates the essence of the contemporary reform movement.

Corporate powers have immense knowledge about ways of secretly manipulating the levers of power to enrich themselves. They know how to use political trickery to increase the billionaires’ share of our economic pie. But corporate reformers are using some of the same tactics and knowledge to manipulate government rather than improve learning.

There is no reason to believe that better schools can be created this way.

We must not take that anger out on TFA teachers, however. In my experience, TFA teachers are a constructive force. We must remember that the extreme TFA alumni mostly came from their first generation of leaders. We should not condemn TFA teachers who were in elementary school when their leaders went corporate.

I hope the TFA rank-in-file will demand an investigation into their organization’s overreach and have a heart-to-heart conversation about the paths to power that they should and should not pursue. I also hope that teachers who, for instance, love their 18-year-old seniors will stand in solidarity with their 20-something colleagues.

Together, we can acknowledge that none of us touch more than a small piece of our complex educational systems.

Perhaps we can agree to paraphrase Thomas Jefferson and get a simple point across to the social engineers who have touted themselves as “reformers.”

– Dr. John Thompson, an education writer whose essays appear regularly at The Huffington Post, currently is working on a book about his experiences teaching for two decades in the inner city of OKC. He has a doctorate from Rutgers University and is the author of Closing the Frontier: Radical Responses in Oklahoma Politics.

Editor’s Note: This essay first appeared in the November issue of The Oklahoma Observer.