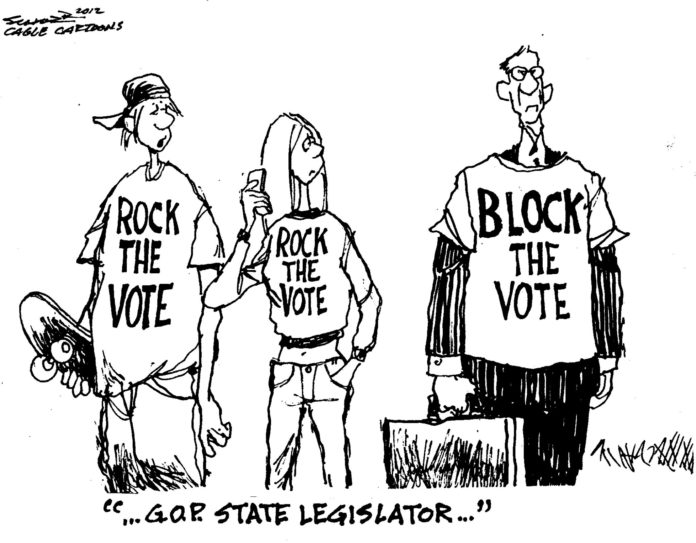 The Battle For The Right To Vote: Hard Fought, Hard Won

How many Americans will be deprived of their right to vote in the upcoming presidential election? A thousand? A hundred thousand? A million?

In any political campaign, there are attempts to keep certain segments of the population from voting in order to maintain the status quo and to keep power in the hands of a few individuals. Some cultures do this using violence and bullets. In a democracy, access to the ballot usually is taken away in more subtle ways.

Hundreds of schemes have been dreamed up to deprive people of their vote. These range from crude methods like intimidation and threats to keep people from the polls or the slick sophisticated felony of negating or misallocating thousands of votes using rigged voting machines.

Conflict always generates the possibility of suppression, and because of that, the issue of voting rights in the United States has been contentious throughout the country’s history, starting with our founding documents.

Our Founders used the most effective political method of voter suppression there is; that is, they simply left certain groups out of the Constitution and Bill of Rights, and with one stoke of the pen, disenfranchised millions of Americans.

The Constitution of the United States, which enumerated the rights of U.S. citizens, became effective on March 4, 1789. However, the most important right, that of voting, is not explicitly stated in the Constitution except as mentioned in the various amendments, but then only to prohibit certain forms of legal discrimination in establishing qualifications for suffrage, stating whether the right cannot be denied or abridged.

Unfortunately, the Constitution was interpreted to give the vote only to white men who owned real property [land] or who had sufficient wealth for taxation. White men with no property, women, and all people of color were denied the vote.

The Bill of Rights consists of the 10 amendments added to the Constitution in 1791; and in the years since, an additional 17 amendments have been ratified. Some of those Amendments also extended the right to vote to other groups of American citizens.

The 15th Amendment was ratified in 1870 [five years after the Civil War ended], ostensibly giving the former slaves the rights of citizenship, including the right to vote. Unfortunately, it was interpreted to apply only to black males so black women joined their white sisters in being excluded from that most important right of citizenship [as well as a host of other rights].

But very quickly black males became disenfranchised by the Jim Crow laws put into place by individual states, as well as the accompanying environment of systematic violence and intimidation used by whites to continue to keep African Americans uneducated, poor, and in positions of servitude.

Women [black and white] began the struggle for the vote at a convention of suffragists at Seneca Falls, NY, in 1848. It took 72 long years, but finally on August 18, 1920, the 19th Amendment was ratified.

However, most Native Americans remained disenfranchised until 1924 when all of them were granted the right to vote by the American Indian Citizenship Act. This was motivated primarily by the high number of them who had served this country during World War I.

The Civil Rights Act of 1964 was a landmark piece of legislation that outlawed major forms of discrimination against African Americans and women, including racial segregation and unequal application of voter registration requirements. It was immediately followed in 1965 by the passage of the Voting Rights Act that outlawed discrimination in voting, thus allowing millions of southern black Americans to vote for the first time.

These two pieces of legislation were written to redress the discrimination and deprivation of voting rights imposed by the “Jim Crow Laws” that had been aimed primarily at African Americans.

The last people to receive voting rights were young adults 18 to 21 years of age. Many states had laws prohibiting voting before 21. Because so many 18-year-olds were serving in Vietnam and being killed while serving their country, there was a strong movement to let these young people vote.

On July 1, 1971, the 26th Amendment to the Constitution gave young adults that right when they turned 18.

The Uniformed and Overseas Citizens Absentee Voting Act is a United States federal law dealing with elections and voting rights for U.S. citizens residing overseas. The act requires that all U.S. states, the District of Columbia, Puerto Rico, Guam, American Samoa, and the U.S. Virgin Islands allow certain U.S. citizens to register to vote and to vote by absentee ballot in federal elections.

The act was signed into law by President Ronald Reagan on August 28, 1986.

This country has come a long way in granting voting rights to all its citizens, but cases still arise today over this basic issue. Some groups historically have been denied this right and/or to have representation in Washington; and there are still disagreements and legal challenges to these barriers.

For instance, the residents of the District of Columbia could not vote for the president of the United States until 1961, and are still petitioning for the right to have more representation in the U.S. Congress. Felons serving prison terms may lose the right during the length of their terms or for the rest of their lives, depending on the state law. Residents of Puerto Rico and other U.S. territories do not have voting representation in the United States Congress, and are not entitled to electoral votes for president.

As you head to the polls this coming Election Day, it is important to remember the significance of your vote and the long struggle some groups have faced to secure the most precious right that a democratic society can guarantee to its citizens.

The least you can do is to exercise that right, not only to protect our democracy, but to honor those who fought so diligently to preserve it for you.

Note: This is a very brief summary of a very complex issue. The author condensed much of this information in this article from various Wikipedia web pages having to do with voting rights. For more details on each issue, start at http://en.wikipedia.org/wiki/Right_to_vote_in_the_United_States.

– Barbara Santee, PhD, lives in Tulsa and is an occasional contributor to The Oklahoma Observer