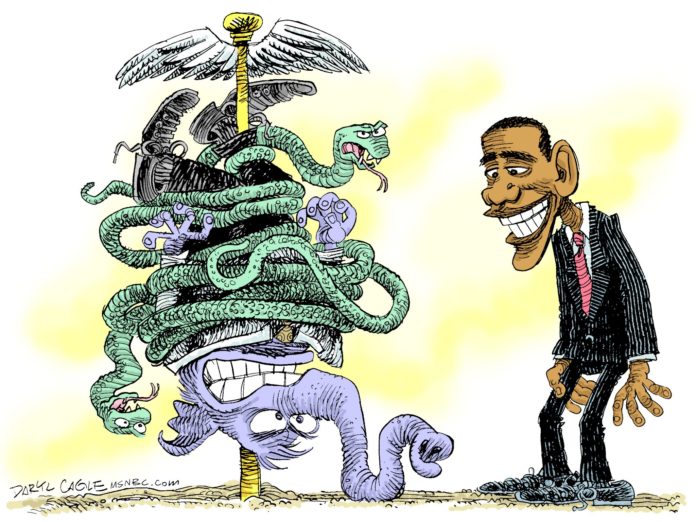 The Supreme Court regained its senses and realized that it was the Constitution it was serving instead of corporate/banking America.

Chief Justice John Roberts broke away from the ideological/political wing of the court and, with the other four thinking justices, wrote a plurality opinion on the Affordable Health Care Act that preserved the major elements designed to help the American people when health care issues arise.

It was a landmark decision and firmly tweaked the noses of those beholden to the health care insurance industry.

The ink on the decision was barely dry before the lies and disinformation from Mitt Romney began.

He said he would act to repeal the law from day one. He can’t. The Congress does that. He said that the ACA drives a government wedge between people and their doctors. It does not. The ACA actually allows more people to have a doctor and does not interfere with physician’s decisions … unlike the cost accountants running private health care insurance companies.

Romney says he wants to go back to the way it was. Really? Those were the times when the cost of health care was competing with the Saturn V booster rocket to leave Earth’s gravity.

Romney said the ACA will add to the deficit and individuals’ costs. It will not. In fact, since the ACA has been law, costs have stabilized. Moreover, the Congressional Budget Office determined that the deficit will be significantly reduced during the next two decades because government health care costs will be reduced and paid for by the tax.

Romney said that you will not be able to choose your own insurance or physician. False. Medicare will not be reduced by $500 billion as Mitt says. With the ACA in place, 33 million more Americans are covered and won’t have to use the extremely costly emergency room service as their first line of care. The cost of Medicare will be reduced.

It is true that the majority of surveyed Americans are against “ObamaCare.” If one asks these folks about the different aspects of the ACA, like no sex or previous condition discrimination, adults up to 26 being included in their parents’ coverage, the reduction of medication costs, no canceling of coverage when sick and having their payments reduced over the private insurers, they say “Yes! Those are the things we want.”

This dichotomy is a direct result of the disinformation campaign that the health care insurance industry has spent tens of millions of dollars on while infusing the GOP with the lies and distortions that now pass for their campaign rhetoric.

One Georgia Republican said today that this was a sad day for liberty. I guess the freedom from want and pain doesn’t count with him. Does it also not matter to the GOP that freedom from health related financial ruin saves family homes and cohesiveness? It should be clear that Republicans value money over people.

Be alert to the disinformation coming from the Republicans. They just don’t want this president to succeed and they will do anything and say anything to give the illusion that this administration is harming the country. It is not.

– Vern Turner is a regular contributor to The Oklahoma Observer. He lives in Marble Falls, TX, where he writes a regular column for the River Cities Daily Tribune. His latest book is A Worm in the Apple: The Inside Story of Public Schools, available through Amazon.