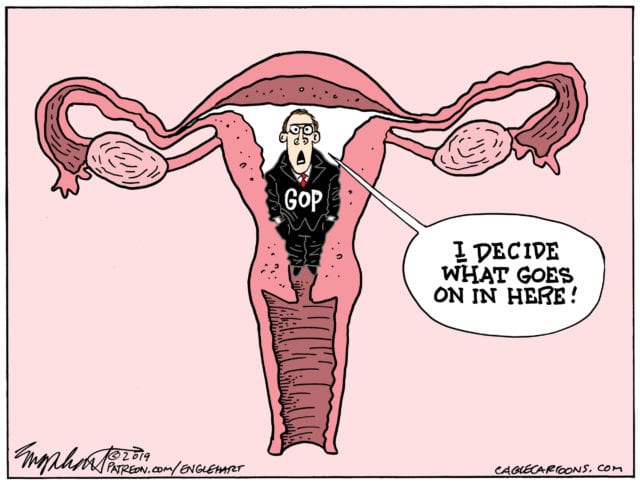 The GOP Chooses To Choose For All

The Republican-dominated Oklahoma House of Representatives re-asserted the GOP position of the inferiority of women last week when it passed a bill that would revoke the license of any doctor performing an abortion.

What the Tulsa World described as the “first meaningful action of the 2020 legislative session” was characterized by the Lost Ogle as the “First Unconstitutional Abortion Bill of 2020,” apparently in anticipation of more GOP efforts to waste tax dollars to prove their opposition to Roe v. Wade – the law of the land for a mere 47 years.

This back-door attack on a woman’s right to choose medical treatment was introduced by Rep. Jim Olsen of Roland.

According to OKC’s KFOR-TV, “The measure adds the performance of an abortion to the list of acts defined as ‘unprofessional conduct,’ like prescribing narcotics without a medical need or handing out opioid drugs in excess of the maximum dosage.”

The offending doctor – carrying out a legal medical procedure – “shall have his or her license to practice medicine in this state suspended for a minimum of one year and shall be fined a minimum of $500,” according to the bill.

“Democrats,” according to the Tulsa World,  “argued in vain that the measure amounts to ‘big brotherism’ – an intrusion into personal safety.”

Minority Leader Emily Virgin of Norman said, “That’s why our caucus is focused on things like paid family leave, increasing the minimum wage, restoring the earned income tax credit, things that would actually help people get into better economic situations where they would feel like they could carry a pregnancy to term,” according KFOR.

The American Civil Liberties Union of Oklahoma noted that “less than five days after members of the Oklahoma Legislature cheered the governor’s commitment to reducing wasted taxpayer dollars,” the first House bill passed would waste those same taxpayer dollars defending an unconstitutional law.

Twenty other representatives co-sponsored Olsen’s bill, including Brad Boles of Marlow. In a column for Sunday’s Duncan Banner, Boles said how “proud” he was to sign onto and debate the bill. His was a personal story:

“That baby I’m referring to was me. Thanks to my birth mother’s decision, I was adopted at birth from an Oklahoma City hospital and raised by my parents, Kris and Lynne Boles, in Marlow right here in House District 51.”

Rep. Boles is, of course, happy to be here and enjoying a fulfilling life.

But let’s ride Rep. Boles’s Wayback Machine back another 32 years. My sister remembers stopping at the drug store as our parents brought me home from the hospital to pick up the most basic baby supplies since the doctor had never picked up my heartbeat and our folks had been warned not to get their hopes up about this second child.

I, too, am happy to be here. I’ve enjoyed a good life, and I have enough projects pending that I plan for any departure to be “too soon.”

Non-existence is difficult for we existents to comprehend. Back before Rep. Boles was born, poet Ted Rosenthal was diagnosed with leukemia and given six months to live. The book he wrote as death approached was How Could I Not Be Among You?

It is not an overweening pride that makes us think ourselves so important, but the basic incomprehensibility of our non-existence overwhelms us. [I know what I would like to happen to my ashes. It irks me that I won’t be aware of the proceedings.]

So, when you see Rep. Boles, congratulate him on being here. And congratulate yourself, too. For as long as you can. The odds of any of us being here in our particular configurations are pretty long.

Strange, though, how once Rep. Boles’s birth mother made her “difficult choice,” her “selfless decision,” all other women became incapable of making such decisions themselves. Not multi-degreed professional women, not victims of rape or incest, not the little girl living down the lane in poverty.

Every woman should have the right to choose the medical treatment she deems best for her situation. Her body, her choice.