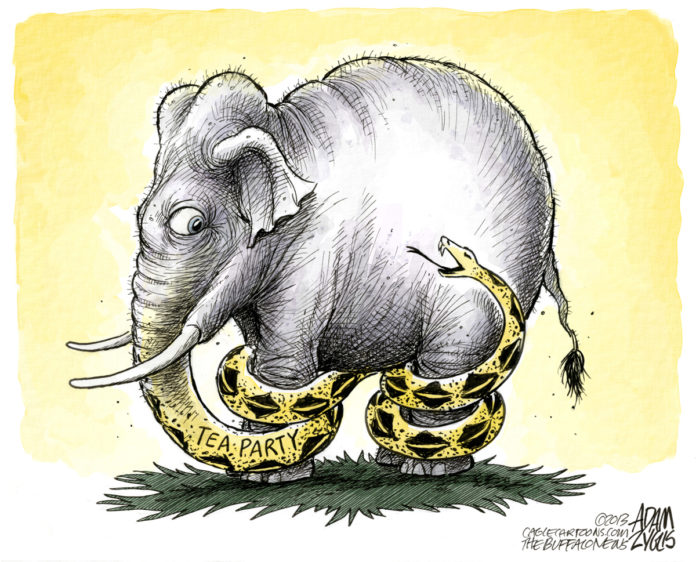 The Gospel According To Trickle Down Tea Partiers

Remember Ronald Reagan and George H.W. Bush, the feel good guys who put the nation awash in debt? Remember Bill Clinton who left a treasury surplus only to have Bush II squander it on wars, lies and bad policy? What caused the great American financial sinkhole was the Republican adherence to “trickle down-supply side” economics.

The trickle down concept is simple: the richer the rich, the more they spend creating jobs for the middle and lower classes. The way to make the rich richer is to keep the tax man off their doorstep while removing any impediment or regulation that might cost money or dilute profits.

Today’s trickle down is call “deficit reduction” – cut social programs while maintaining tax breaks allowing the rich to become astoundingly richer. No Republican dares call this trickle down, supply side, laissez-faire, or what it actually is, loot and plunder economics.

Even Tea Bag people such as Oklahoma’s freshmen congressmen Jim Bridenstine and Markwayne Mullin know better than to call this policy by names that cannot be mentioned.

Deficit reduction allows a certain self-absolution without having to kneel in the confessional for the likes of Bridenstine and Mullin. But it’s really lipstick on the same tired old pig.

Trickle down architect David Stockman, budget director for President Ronald Reagan, admits it worked so poorly they had to rename their efforts “supply side” and still it failed.

Stockman has detailed this failure in his new book, The Great Deformation: The Corruption of Capitalism in America. While he takes a swing at everyone he holds no punches regarding his former boss.

Despite its many failures, trickle down is alive and well. Red states such Oklahoma are reaping the trickle down of a social policy that provides that if the wealthy are healthy, happy and fed, society’s lower elements will be satisfied just knowing their betters are living well.

There is a national conservative mindset that believes any program not included in the defense budget or does not have large portions of its budget that can be privatized is government waste. This allows conservatives and Tea Bag travelers to plunder social budgets in the name of deficit reduction.

Many states, especially in the South, have chosen the red path, and so many of their less affluent citizens are reaping this trickle down of social policies. Unfortunately many of those citizens are women, casualties as it were of the Republican war on women.

A good example would be the renewal of the Violence Against Women Act. Sens. Jim Inhofe and Tom Coburn, both lovers of life, liberty, the pursuit of happiness and retention of tax breaks voted against the act. Marching lockstep with their senators were fish congressmen Bridenstine and Mullin. Even though “fish” is the term for Texas A&M freshmen it fits these two as they swim in a school mindless Tea Bag guppies all the while thinking they are sharks.

Next comes T.W. Shannon, speaker of the Republican-controlled Oklahoma House, with a bill which passed 71-27 calling for the creation of statewide public service announcements encouraging marriage as hedge against poverty. The announcements run the risk of encouraging women to stay in abusive relationships for fear of being tossed into the Republican social dustbin.

These pro-marriage, anti-poverty, Public Dis-service Announcements will be paid for out of the Temporary Assistance for Needy Families fund [TANF]. TANF supplies assistance to needy families in instances of parent’s death, incapacity, absence or unemployment. Such families are generally headed or managed by women.

Oklahoma conservatives have long sought to make divorce in Oklahoma difficult, claiming it created welfare recipients. By extension, taking warmth from the homes of the poor or food from the mouths of hungry children in order to award production contracts for commercials is acceptable.

The trickle down from national conservatism continues in Oklahoma with longer prison sentences, especially for women. The state ranks at or near the top in every survey of incarcerated women. Shamelessly, state prosecutors and judges, much like their legislative fellows, rather than risk losing an election against a tea bag or evangelical opponent, find it easy to jail the poor.

As of this writing the state prisons are full, there are no beds. Yet, prosecutors keep asking for – and judges keep giving – longer sentences.

A state program passed last year to ease overcrowding was dismantled this year in homage to conservative thought. It should also be noted that many of the state’s county jails are becoming clogged because of the state prison overload.

But to come up with a better method would be “liberal.” Soon this national hard-on-crime mindset will trickle Oklahoma into one of the nation’s largest government-owned nursing home systems. But the state will not be known as liberal no matter how many non-violent offenders die in prison squalor.

Then there’s poor state Rep. Sally Kern, leading the fight against homosexuals in America. She finally caught on that the tide was turning in favor of equality rather the rights suppression.

But Sally is back in last year’s political shoes with a bill recently signed into law by Gov. Mary Fallin. Taking her cue from a conservative issue that is SOOO yesterday, Kern is now fighting against Sharia law. Oklahoma voters approved an anti-Sharia law a couple of years ago, spent thousands of taxpayer dollars defending it in court, and lost.

Rep. Mike Reynolds is carrying the conservative trickle down for education. He recently told fellow legislators, “It is not our job to see that anyone gets an education. It is not the responsibility of me, you, or any constituent in my district to pay for his or any other person’s education. Their GPA, ACT, ASAB, determination have nothing to do with who is responsible. Their potential to benefit society is irrelevant.”

Newly-released e-mails from Gov. Fallin’s office make it very clear that her rejection of the Affordable Health Care Act had nothing to do with health care or affordability, rather it was pressure from Tea Bag/Evangelical elements that just didn’t want the Obama Administration to succeed.

Gov. Fallin still hasn’t caught on that other states are in fact getting on board. But, then, perhaps many of those governors either aren’t running for re-election or don’t fear Tea Bag or evangelical opposition.

Regardless, much of what is, or is not, happening in Oklahoma is the result of a trickle down of Tea Bag and evangelical rhetoric at the national level. Even the governor’s position on the death penalty, something most states are beginning to slowly reject, places on her the way to setting a record for the number of executions in one term.

While no one has as yet dubbed her “Needle Mary,” her propensity for killing inmates recommended for clemency is beginning to draw some attention. Again, these are actions taken from a national agenda claiming to be sanctified by holy writings.

Oklahoma once again – much like the Sharia Law legislation – has bills pending on personhood, which has already been rejected, and end of life measures that can nullify “Do Not Resuscitate” orders.

If any one thing has trickled down to Oklahoma, it is that life is sacred, even if it means keeping people poor, uneducated and imprisoned.

Life is sacred in Oklahoma. And if you don’t believe it? The state can schedule another execution just to prove it.