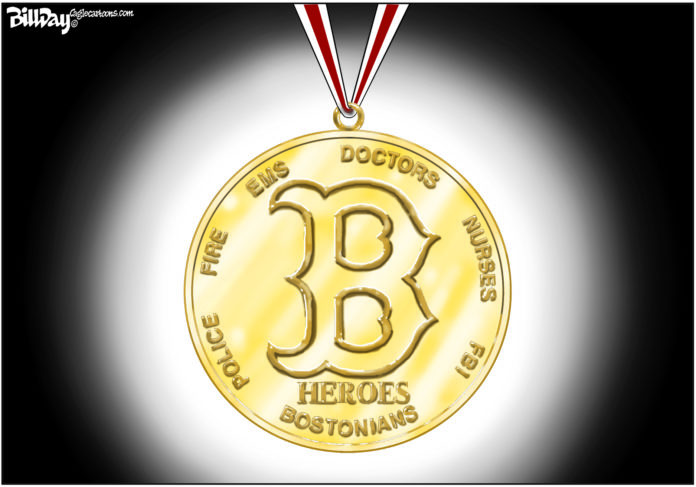 The Rule Of Law

We are Boston. Just like we were New York on Sept. 11, 2001 and just like our nation was Oklahoma City on April 19, 1995. We are Boston because the premeditated placement of explosive devices intended to kill and maim did not take place on just any day. These acts of terrorism did not occur at just any place.

The third Monday of April in Boston, MA is Patriots’ Day, as it has been since April 19, 1775, commemorating the Battles of Lexington and Concord, the first of the American Revolutionary War. Since 1897, Patriots’ Day in the Boston area has been marked by the running of the Boston Marathon.

We are Boston because what truly identifies and epitomizes the United States of America cannot be destroyed from without. Some call it “freedom” or “our way of life.” Some say that what characterizes us are “constitutional rights.” However, we know that we are Boston because our country, from its inception and to the very end of its days will have been based on the “Rule of Law.”

The Rule of Law refers to the authority and influence of law in our society. It is the constraint on behavior of citizens, including those citizens who happen to be powerful public officials. In the absence of the Rule of Law, we would be subject to the arbitrary, capricious and casual whim of despotic rulers whose power is unchecked.

Without the Rule of Law, the rights of the minority would be trampled underfoot by the majority.

Sometimes lost in the patriotic fervor of the American Revolution, the Barbary Coast War, the War of 1812, the Algerian War, the Spanish-American War and other more modern wars of our grandfathers, fathers, brothers and sisters is the fact that instead of fighting for freedom, what is being protected is the Rule of Law.

A few months ago, I stood at the intersection of Washington and State Streets in Boston in front of the Old State House on the very spot where on March 5, 1770, three colonists were killed and two more mortally wounded. Viewing the site of the Boston Massacre and walking the Freedom Trail to Bunker Hill and the USS Constitution, I understood that what makes the history of Boston precious to Americans is the Rule of Law.

The American colonists found themselves subjected to laws, tariffs and economic oppression without representation. They sought a means to gain input over the statutes and ordinances that regulated their activity and their economic freedom. They sought to establish the Rule of Law.

It is therefore appropriate that in the city of Boston, during the very infancy of our nation’s struggle toward independence, the respect and recognition of the Rule of Law prevailed in the treatment of a British captain and his men.

For you see, after those shots were fired, British Capt. Thomas Preston and his men were indicted for murder. Unfortunately, because anti-British sentiment was so strong, the colonist/lawyers all feared that representation of the indicted men would be the end of their legal careers.

All except for one: it was John Adams, a staunch critic of the British occupation, and later our second president, who recognized the importance of a fair trial for the accused and agreed to represent them. He later wrote that he risked infamy and even death, being subjected to suspicion and prejudice.

Because of this courage, John Adams later wrote in his diary, “The part I took in defense of Captain Preston and the soldiers, procured me anxiety, and obloquy enough. It was however, one of the most gallant, generous, manly and disinterested actions of my whole life, and one of the best pieces of service I ever rendered my country. Judgment of death against those soldiers would have been as foul a stain upon this country as the executions of the Quakers or witches, anciently.”

Historically, the Rule of Law moderates the behavior of American society. It is the standard by which we know that the majority will not trample the rights of the minority. It is the promise of respect and civility without which neither would exist. Without the Rule of Law, there would be no ballot box.

The Oklahoma legislature has rules. Those rules govern the introduction of legislation and the dates by which legislation must be approved by the house of origin. Legislative rules control how long a bill must be on the floor before it may be considered and when it is considered, how long it may be debated. The rules of the Oklahoma legislature are the Rule of Law to govern the behavior of the powerful and to protect the rights of those who are not.

Today I have been informed that teachers are being told that a yet unwritten bill will attempt to negatively impact teacher retirement. Last week, word leaked that debate time on important legislation proposing an income tax cut and legislation cutting benefits to injured workers will likely be shortened, “in the interest of saving time.”

If a concern about “time,” will undermine the Rule of Law then why was time wasted honoring Dog the Bounty Hunter on the House floor and non-binding resolutions worthless resolutions entertained, similar to those still on the agenda that oppose, “the elimination of wrestling from the Summer Olympic Games,” or honor, “the life of Baroness Margaret Thatcher and expressing deep sorrow and condolences.”

We are Boston, because we know that there is a higher purpose. We are Boston because we understand that our actions define us. Over the next six weeks, we will see how the leaders of the Oklahoma Legislature are defined.

– The author, a Chickasha Democrat, represents District 56 in the Oklahoma House of Representatives