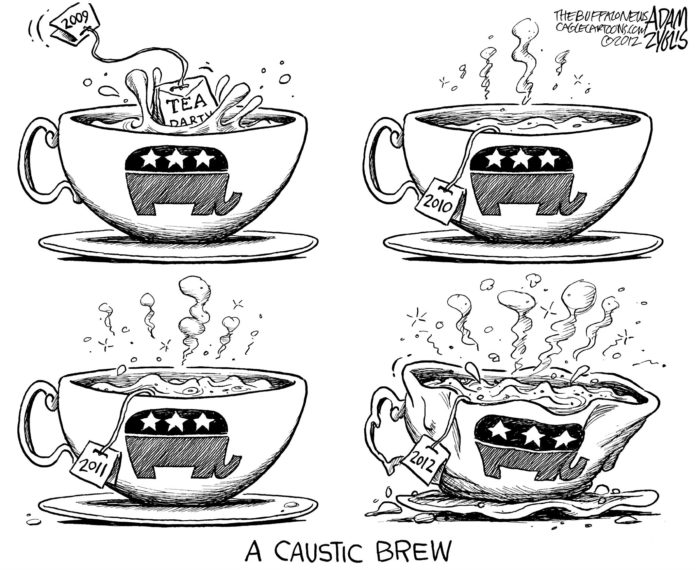 With more than a dozen of their most reliable House and Senate allies facing stiff challenges from the Tea Party right, deep-pocketed corporatists opened the financial floodgates in an all-out quest to protect the status quo.

As a result, a dozen or more races are emerging as political laboratories, of sorts, that could help answer – at this moment, in this state, at least – an age-old question:

Which is more salient in winning campaigns – money or manpower?

The social-religious conservatives seeking to knock off the GOP incumbents can’t compete with the financial firepower behind such groups as the Coalition for Oklahoma’s Future [$300,000 war chest – see details below].

But it wouldn’t be shocking, for this reason: Big money interests writing big checks haven’t always fared well in past efforts to knock out uber-conservative incumbents [one example: Rep. Mike Reynolds] that failed to show proper deference to the corporatist agenda.

Will the corporatists reign supreme? Or will the Tea Party kick into high gear? Here are 10 legislative races worth watching for clues:

Jolley, Senate Appropriations Committee chairman, is rightwing Republican to his in-grown toenails, but his 100% pro-life rating and support of income tax cuts isn’t sufficient for Blair, a fundamentalist Baptist preacher and former OSU and Chicago Bear lineman. This race may be the nastiest in the state – with Jolley accused of an ethics violation and Blair of operating three companies that violated state tax laws.

Newberry, chair of the Senate Business and Commerce Committee, is an arch-conservative who authored the bill that would require doctors to give women seeking an abortion the opportunity to hear the fetal heartbeat. His opponent, Croucher, is even farther right, railing against ObamaCare and Sharia Law and supporting the open-carry of weapons without a license.

Cooksey, seeking her fourth term, is assistant GOP House whip and vice-chair of the Appropriations and Budget subcommittee on Public Health and Social Services. Her opponent, Dani, is a Sooner Tea Party activist who helped found the ultra-conservative High Noon Club that meets regularly at an OKC gun range.

Watson, a former TV newsman, a retired ONEOK executive and one of the Legislature’s nicest members, is chair of the House Republican Caucus – all the evidence uber-conservatives need that he is a betrayer of true conservatism. Jacobs is a dental anesthesiologist who’s had a tumultuous term on the Tulsa Board of Education.

Mulready, a former health insurance executive, is tarred by uber-conservatives for his role in the Legislature’s ill-fated attempt to set up a health insurance exchange under the President’s Affordable Care Act. Gantz, an insurance agent, stresses his opposition to ObamaCare, pounds the anti-abortion pulpit and lambasts Mulready for taking campaign money from Tulsa oilman-banker-philanthropist and – gasp!—“Obama bundler” George Kaiser whom he refers to as “Mr. Solyndra himself.”

First-termer Hall toes the fundamentalist line on social issues like abortion and is a reliable corporatist vote. She backed legislation that would have ended collective bargaining for municipal employees – a position that evidently didn’t set well with Renner, a retired OKC firefighter. Hall is uber-right, yet it was Renner who claimed the endorsement of the grass-roots Oklahoma Conservative Political Action Committee [OCPAC]. Go figure.

The far-right considers Thomsen a liberal, blasting him for his mediocre scores on the Oklahoma Constitution’s Conservative Index. Yet Gallup failed to win the endorsement of OCPAC. So why is this race on our list of 10 to watch? Because there is evidence [follow the money!] that the status quo crowd is worried about Thomsen’s prospects. They’ve targeted his race for some serious financial help.

Liebmann, chair of the Appropriations and Budget subcommittee on General Government and Transportation Committee is another reliable corporatist vote, but epitomizes the RINO pejorative favored by the ultra-right. Turner, described as a business investor and inventor consultant, is running a grass-roots campaign that won’t accept PAC money. He was endorsed by the OCPAC.

Interestingly, at today’s Political Junkies luncheon in OKC, GOP pollster/consultant Pat McFerron described Liebmann as “the most vulnerable incumbent out there” – not only because Turner has the money to self-finance [and support other uber-rightists], but also because 30% of Liebmann’s redistricted district is new to him and only about 15% of the district is in the OKC Council ward he previous represented.

This is an open seat, thanks to redistricting. The current representative, Democrat Purcy Walker of Elk City, is term-limited, so the district boundaries were moved closer to the higher-growth metro OKC area. It bears watching, though, at yet another test of uber-conservative strength.

It’s a sign of just how far right Oklahoma politics has lurched that incumbent Sens. Jolley and Crain and Reps. Cooksey and Mulready – ultra-conservatives, all – would be viewed as moderates or liberals by the party’s crackpot caucus.

It’s also a sign of just how serious the state’s 1% is taking these challenges that they’re writing big checks in support of these incumbents.

All you need to do is look at the Coalition for Oklahoma’s Future reports on file at the Oklahoma Ethics Commission.

Here’s the list of where the independent expenditures are going:

How much drama will we have Tuesday night? Stay tuned.