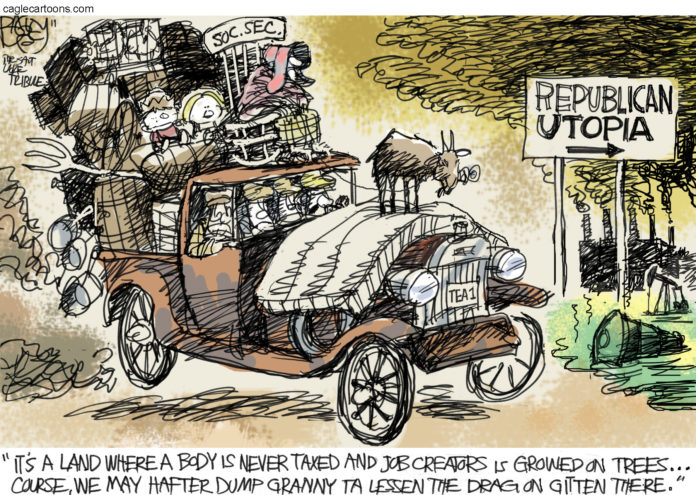 The Time For Lying Is Now

A recent blog piece by Mark Sumner succinctly summarized the state of the Republican Party and its crumbling legitimacy for representing the American people. My analysis follows:

Ideological fights in Congress are nothing new to American government, but these are uniquely dangerous ones, because the basic Republican operating philosophy is fear mongering. When people are afraid they do irrational things and that’s what the RNC is counting on to get votes for their candidates because people are afraid, not because candidates make sense.

The time is long past when ideas contested for history’s approval. It’s not even that what’s now coming from the political right consists of 100% emotional, fear-based dogma without factual basis.

The Republicans staked out a position is that requiring constant lies. There is a kind of impudence among Republicans that doesn’t even try to merely distort or shade facts, rather they shove the lies right into our faces.

A perfect example is they lie about President Obama being the “food stamp president” even though more people joined that program under George W. Bush.

The Republicans got what they wanted and said it would make us all wealthy and create jobs.

They got unlimited wealth for CEOs, unlimited banking “creativity” with other peoples’ money, trade agreements that guaranteed manufacturing could move to the cheapest, most desperate labor sources available, massive cuts in capital gains taxes and large boosts in wealth from estate tax freedom.

They got record oil and gas drilling freedom, record giveaways of public land and the middle classes shouldering more of the burden so those job creators [the rich] would be free to work their magic.

In case you missed it, none of these things worked for anybody but the richest Americans.

Today, the Republicans cannot justify their claims that the Democrats or President Obama are responsible for the fragile economy or the civil unrest beginning to sweep the nation.

The economy crashed because taxes were cut, preemptive wars were fought on credit, regulations were removed and unions were made scapegoats – as they always are by Republicans who fail.

They can’t blame any of the failures from the Bush years on President Obama, but, of course, they do.

The lies continue with attacks on the science of climate change and evolution, that gay marriage is a threat to “traditional” marriage, the threat of illegal immigrants, the state of the national debt and the effects of the President’s health care plan.

The Republicans simply can’t admit the truth about the economy, because they are responsible for its collapse in 2008. They can’t admit that their policies directly caused the worst economic failure in American history since the last time these same policies were tried in the 1920s.

The truth is the Republicans have nothing to offer, least of all a plan for governing. Conservatism is no longer about politics. It is a cult that requires certain phrases be repeated, certain hatreds be fed, and that purity of message be maintained regardless. This schism with reality is increasingly large and obvious; obfuscation replacing reason and fact.

Real history scares and confuses today’s Republicans because truths undo their ritualized beliefs. The Republican publicity machine now tries to rewrite its own history as well as history that actually worked. They rewrite Reagan who raised taxes and increased debt, rewrite FDR who created policies that actually worked, rewrite Founding Fathers who never owned slaves, never supported government regulation of the economy, never wavered in their love for a religiosity that didn’t yet exist.

The real danger isn’t that someone might listen to the Republicans. The danger is that we might forget that they’re lying.

Too often Democrats, including this president, have felt that the best way to handle Republican lies is to compromise.

You can’t compromise with those committed to altered reality.

– Vern Turner is a regular contributor to The Oklahoma Observer. He lives in Marble Falls, TX, where he writes a regular column for the River Cities Daily Tribune. His latest book is A Worm in the Apple: The Inside Story of Public Schools, available through Amazon.