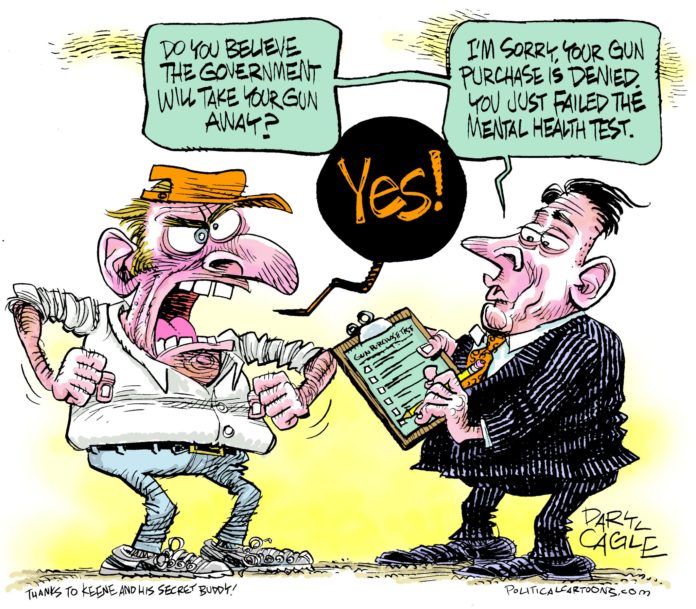 The Tyranny Of Fear

For the two months since the dreadful tragedy in Newtown, CT I’ve resisted writing any formal pieces discussing the issue of guns. Then, a deranged and unhinged former FBI agent e-mailed me an article written by the editor of something called The Natural News, Mike Adams.

It was so shocking and disturbing that I had to say a few words for those sane people left in the world.

The great G.B. Trudeau published a flashback strip recently in the paper highlighting the title of this article. The radio talk host is interviewing and being interviewed. The question asked of the host is, “What are we like as a people?” He answers by saying that two sets of facts define our current state of mind.

In 2001, 19 people with box cutters crashed airplanes into two office buildings and the Pentagon killing 3,000 people. Our response was invading two countries, one of which had nothing to do with the attacks, and creating an entire bureaucracy [Homeland Security] at the cost of a few trillion dollars. During that same time period, the commentary continues, over 270,000 Americans were killed by domestic gunfire for one reason or another. Our response to that was to weaken our gun laws. The kicker is that the interviewee is a “little green man” from another planet who says he can’t comprehend the answer.

The answer to both these inputs is fear: mind-numbing, logic crushing, civilization destroying fear. Here’s the opening sentence from Mr. Adams’ bizarre piece of over five, single-spaced pages of overbearing fear exposition:

By screaming about how they wish to destroy the Second Amendment and disarm the American people, collectivist [I think this is code for “socialist] media gun grabbers and “school shooting doomsday” fear mongers [People being shot at should be afraid, shouldn’t they?] have managed to do exactly what they hoped not to do: They have pushed millions of AR-15s and hundreds of millions of rounds of ammunition into the private hands of Americans.

So, if I understand this correctly, it’s the people afraid of being shot, or having their children shot by AR-15s that are forcing “millions” of other Americans to go out and lay down $1,000 or so for an assault rifle. Does this mean that those “gun grabbers” want the highly armed public to defend them against random shootings by equally armed madmen? Who is afraid here?

Adams goes on to rail against the “gun grabbers” who are out to destroy the Second Amendment and thus antagonize the gun rights folks who will not give up their guns for any reason. This guy continues to describe a scenario where the country will erupt into a shooting war if Obama and Biden “overplay their hands” and try to confiscate assault rifles.

The term “gun grabber” is used about a dozen times in 2,000 words, so Adams’ fear is evident: He cannot imagine standing before his fellow neighbor unarmed.

The facts are that nobody is calling for a confiscation of firearms; not the government, no rational citizens, not the “liberal media,” nobody, yet here these gun rights folks are shaking in their boots about losing their precious security toys.

In fairness, Adams lists several of the proposals the Obama Administration suggests as acceptable, but warns that the AK magazines will be very hard to find. Gosh. Everyone should find a box of 30 round AK magazines under the tree every year.

One of the mantras of the gun rights people is that the citizens have the right to defend themselves against government tyranny. I admit that history shows us that the U.S. government has acted tyrannically against labor unrest, the “Hoovervilles” in Washington, DC and other isolated incidents such as herding Japanese-Americans into concentration camps during World War II. But the causes and reactions for these actions have been solved by the LAW changes necessary to prevent unnecessary bloodshed between our own people. I think that is included in the phrase in the Constitution that deals with the “general welfare” of the citizens.

The real tyranny is the tyranny of fear in the hearts and minds of the fearful. Those who think an inanimate object designed to kill other human beings, foreign or domestic, are their security blankets are missing the whole point of living in a free society.

Why is it, for these people that the gun has to be the center of their security? What are they afraid of?

They are much more likely to lose their jobs, their homes and their health insurance to the club of laughing billionaires than to actually have to draw a bead on a bad guy. Shouldn’t the ballot box be the better weapon to eliminate fear, rather than the gun being the tool of terminal justice?

Finally, I am not advocating gun confiscation, nor doing anything with the Second Amendment, except maybe clarifying its meaning. Either one of these actions would spark another civil war – as Mike Adams suggests.

The fear of the gun worshiper in the United States is so uncontrollable and they would cast their fate with the thing they trust the most: their guns. Their fear is their real tyranny because it consumes them, destroys their ability to reason and makes violence and killing their top priority.

Fear will not make this country a better place to live nor a true representation of the “home of the brave.”