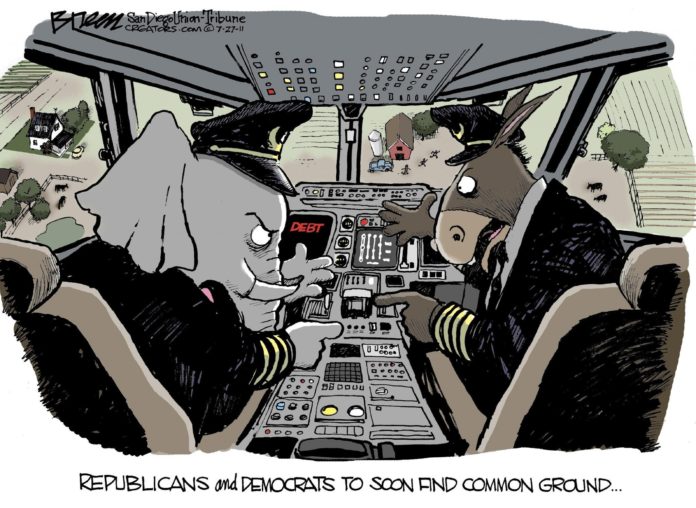 These Are Dangerous Times

After a second cup of morning coffee and a perusal of the latest on the “debt ceiling” debate, some thoughts occurred. The ‘net is filled with what passes for news from pundits, political observers, and soothsayers. There are certain observations, taken with the musings and self-serving quotes from the elected to – just who is subject to question and speculation, that fuel my own observations.

I see a lot of cautious optimism. I am not optimistic, I will say, with some caution, that some type of a deal will be made, sort of.

The speaker clearly needs a win to keep his job. The saner members of his party do not want a far right or completely Tea Bag controlled speaker and upper management running the party. These members may do some arm-twisting to get the speaker’s bill passed.

That said, the Dems do not want to come away appearing to have capitulated. They will want something, and that would be Senate Majority Leader Harry Reid’s bill. The Reid bill has as many flaws as the House bill.

Each group wants to make it beyond November 2012. Neither is sure just how the American people are viewing all this because the population has sent some very mixed signals.

The conservatives won in November, but many of those millions voting red had no idea what the Tea Bag people, far right and Chamber of Commerce had in mind for them. The voting population thought the issue was jobs, the Chamber and fellow travelers know the issue was untaxed profits, which do little to create jobs.

If a debt ceiling agreement, much of which is a contrivance on the level of Weapons of Mass Destruction, is reached, each party will claim victory. Unemployment will not abate, the “safety net” will be full of holes, taxes the House sought to prevent will be reborn as fees and other gimmicks by the states, and the middle class will continue to dissipate.

The left will say the president knew and understood the consequences of allowing the government to shut down – lost pay to employees, Social Security, veterans benefits and payments to those contracting with the government.

However, to his credit, the president also understands this is about more than just the budget. This “debate” is also about the survival of the office of President of the United States. If he capitulates the minority driving the “debate” will have the green light on every issue, no matter how minor, until the office of President is meaningless and governmental structure is controlled by a few vocal, not particularly sophisticated, ideologues more concerned with power than governance.

Obama will call for a platform of rebuilding America.

The Tea Bag right will claim they are already rebuilding, no matter how painful. They will also claim that those unhappy with their “progress” are whiners, malcontents and maybe not even true Americans.

Obama will be re-elected because the Tea Bag approach will hurt too many, benefit too few and, in a global economic-political arena, will be shown to be not only self-serving, but sophomoric in the extreme. Our economic partners and political allies will demand change; they will demand it of the voting public.

But, these are dangerous times for the American people and the republic. The changes looming on the history’s horizon, especially those driven by ideology, always have unintended consequences that cannot be easily, if ever, reversed.

Changes brought about through sincere efforts of governance can more easily be corrected, but require a “loyal” opposition.

In the end this is going to be very painful for every aspect of the United States social, political and economic structure. Just what will emerge from this tunnel like journey is difficult to say.

One thing that is certain: by the time the ship of state has righted itself we will not have the republic we once perceived. And, we will also come to the realization that we are not the people we thought we were.

UPDATE [7.28.11, 4:40 pm]: Oklahoma 1st District Congressman John Sullivan, R-Weasel, has said he will support the Speaker of the House and his debt ceiling bill. Sullivan, who has never flinched from admitting plaid was his favorite color, has been a stalking horse for the Tea Bag contingent of the what’s left of the Republican Party.

He was undecided this morning; this afternoon he is onboard, which says the speaker will get his bill and see it go to the Senate where it will be drawn and quartered.

The next step will be up to the Senate and the President.