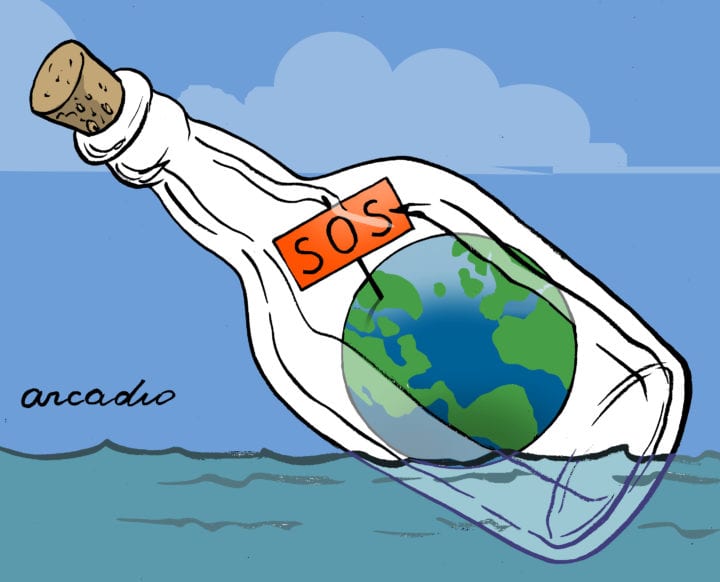 These Parlous Times Bring Folks Together

This one Earth we share with our many cousins is entering parlous times.

Last summer The Guardian interviewed Mami Mizutori, The UN secretary-general’s special representative on disaster risk reduction, and reported, “Catastrophes such as cyclones Idai and Kenneth in Mozambique and the drought afflicting India make headlines around the world. But large numbers of ‘lower impact events’ that are causing death, displacement, and suffering are occurring much faster than predicted.”

As re-published by Common Dreams, Mizutori acknowledged: “This is not about the future; this is about today … We talk about a climate emergency and a climate crisis, but if we cannot confront this [issue of adapting to the effects] we will not survive.”

While our Republican-dominated federal and state governments bathe in fossil fuel money, ignore the facts and disparage those who dare look past the daily bottom line, other people and places are actually trying to make a difference.

Twenty states and more than 400 American cities have pledged to try to abide by the Paris Climate Accords that our polluter-parrot president pulled us out of two years ago.

Most nations stayed in the accord and remain committed to a more habitable world.

While our 1950s-thinking president’s main work seems to be insulting actresses and making this country as polluted as possible, such progressive folks as Mongolia [Outer Mongolia, if you will] are banning coal in the capita of Ulan Bator in order to clean up the air.

The British Committee on Climate Change thinks that country could cut greenhouse gases “nearly to zero by 2050,” according to the BBC. The CCC report from May noted “that if other countries follow the UK, there’s a 50-50 chance of staying below the recommended 1.5C temperature rise by 2100.

“A 1.5C rise is considered the threshold for dangerous climate change.”

But it is not just sane governmental action that signals a desire for a better world.

In July, Chubb insurance became “the first U.S. insurance company to announce that it is distancing itself from the coal industry,” according to Think Progress.

“The insurance company said Monday that it will stop investing in the coal industry. It also will put an end to selling policies to that go toward constructing new coal plants, and will cease to underwrite companies that generate more than 30% of their revenue from coal mining or supply electricity produced by coal.

“And it’s doing all of this because of the climate crisis.

“‘Chubb recognizes the reality of climate change and the substantial impact of human activity on our planet,’ said Evan Greenberg, the chairman and chief executive of Chubb, in a statement.”

Later that month, Common Dreams reported, “Climate campaigners cheered on Friday after the European Investment Bank revealed a proposal to phase out funding for fossil fuel projects by the end of 2020.”

Gosh, profit-driven institutions realize the dead-end game of amassing money for a world not worth living in.

Then, too, we have a changing political climate regarding climate change. Think Progress reported in March: “Faith groups and a bipartisan alliance of lawmakers are coming out hard against the Trump administration’s efforts to rollback rules overseeing toxic chemicals at power plants.”

And if doing the right thing requires the stick, not the carrot, Huffington Post reported in August, “A majority of registered voters support holding energy companies liable for funding misinformation on the climate crisis, according to a new poll.

“Nearly 62% of voters said they’d support legal liability for energy companies or utilities ‘if it could be proven that they misled the public about the consequences of climate change’ in a survey by the progressive pollster YouGov Blue. Of that figure, more than 47% said they ‘strongly support’ such a policy.”

Bankers, insurance agencies, evangelicals, Democrats, Republicans – whatever you might call yourself – we all live on this one Earth. There is no Planet B.