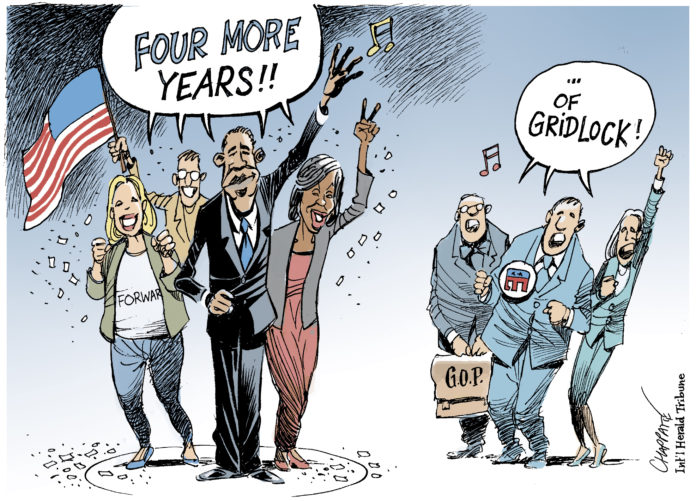 This Is The Time To Get It Right

The election cycle has ended. Barack Obama was re-elected and many new faces will populate our Congress next year.

Meanwhile, we have some time to ruminate on recent events in our social milieu and decide what we want our representatives to do. For far too long we the people have depended way too much on the hearts and souls of our elected officials to do the right things by us. Too often, way too often, they have ignored us and succumbed to the lure of lobbyist money and influence peddling.

I couldn’t help but notice the giant red swath across the electoral map as I watched the election returns. Next day I looked at the breakdown of votes by state.

What struck me most was the margin of victory in many of the red states matching the same margin in many blue states. The overall popular winning vote count for president was around 1%, corroborating this thumbnail analysis, but flicking the switches on the “why” panel in my mind.

Yes, we are a divided nation, but why are the divisions so wide and deep and how did they get that way? An essay much longer than this is necessary to explain it, but here are a few things that come to mind.

Ever since Nixon’s GOP played the political race card in the South by using the divisiveness of the Voting Rights Act and Civil Rights legislation, there has been a resurrection of the ancient fears and prejudices intended for burial after the Civil War. Clearly, the lust to win at all costs from the Republicans has superseded the national interests as a whole.

I’ve written about the economic factors that drive the GOP in my books, but the cravenness with which their current party platforms and strategies are formed and implemented ignores common decency, civil discourse and accord while scraping the scabs off of the old wounds of our most horrific domestic conflict.

The obviousness of racism in our politics was never more obvious than in these last four years and through this election cycle. The breakout of the votes among white men and other demographics shows that the tactics of race baiting worked. Regionally, they worked very, very well. Even in Mississippi where the African-American demographic is the majority and voted virtually 100% for the president, he lost the state by double digits.

This says that virtually all the non-African Americans voted for Romney while not enough of the majority voted for Obama.

The tactics used today by the super PACs led by the likes of the infamous Karl Rove seem designed to specifically exploit those prejudices not only in the South, but also in the rural regions of almost every state and in every state that is primarily rural.

The reader can decide for him or herself what that means because it probably means different things in different areas.

That all said, it is now the time to bind up our wounds that this political war has caused and fix the broken government in Washington and our state capitals. We simply cannot afford to have our representatives remain as the whores of lobbyists and their corporate/banking paymasters.

That kind of arrangement isn’t democracy, it is plutocracy operated by oligarchs who lust for as much power as they can obtain.

We the people are not powerless to stop this theft of our voice. Let us demand from our U.S. senators that they throw out that thick rulebook and streamline their rules, especially the filibuster rule. It no longer serves the will or benefit of the people, but rather the whim of the political climate.

Let us demand a Constitutional amendment that sends the Electoral College to museum status; it has outlived any usefulness and is potentially dangerous. If, for example, President Obama won a narrow victory in the College, and lost the popular vote and states votes, the potential for insurrection and lengthy legal challenges to the election arise, thus paralyzing the government.

Let us demand a Constitutional amendment that overturns Citizens United v. FEC while making all elections publicly funded. Include in this amendment the outlawing of lobbying elected officials and their staffs, eliminating the revolving door of elected officials working for lobbies after term expiration and requiring a stringent petitioning process to receive public funds for running for office.

Finally, let us consider having peace be our constant policy instead of constant war. Let war be our last resort as opposed to our first. President Eisenhower warned us about the military-industrial complex dictating policy via lobbying the government. Just four years after that warning, we plunged into Vietnam on unfounded fears fueled by the “complex” and their surrogates.

We have been at war almost 80% of our years as a nation, including the current adventure in Afghanistan. In 2000 our defense/security budget was about $400 billion. Today it is over $1 trillion and counting. In those 12 years nobody has invaded us, but we lost the Fourth Amendment to fearfulness.

Building more exotic weapons systems is little deterrent to people with box cutters and the ability to slip by our intelligence systems. Surely our vaunted business community can see itself as better negotiators for resources like oil than as bullies that create a thousand new terrorists per day.

These and the many other domestic tasks that need our early action require a government that is agile, prone to debate rather than intransigence, open to new ideas instead of embedded ideologies long seen as not workable and able to compromise to reach the best solution available.

Throwing mud over a high fence is not how we are intended to govern and is an insult to all those who died preserving our right to choose representatives for the republic we so love and cherish.