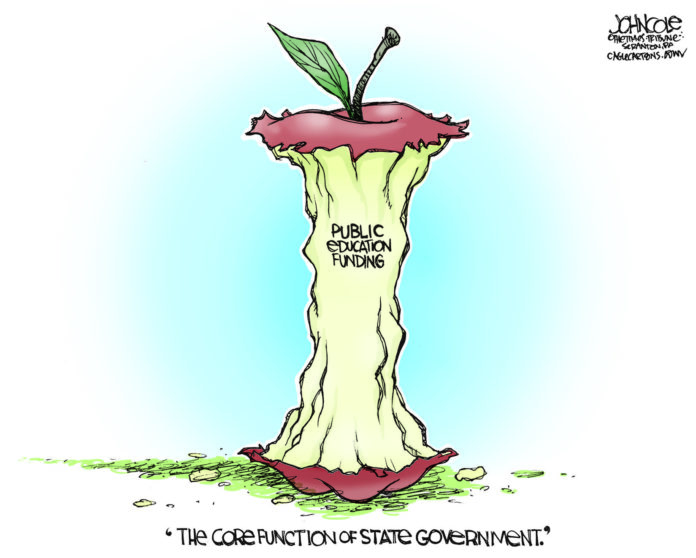 To Convene Or Not To Convene – That Is The Question

The despondent Prince Hamlet’s soliloquy “To be or not to be … ” contemplates life and death while waiting for Ophelia, the love of his life. He bemoans the pain and unfairness of life, but considers that the alternative could be worse.

Hamlet’s struggles are based in his indecision and hesitation to avenge the murder of his father by a greedy and corrupt uncle.

Like Hamlet, Oklahoma is contemplating a decision that must be addressed at some point by some means. Oklahoma teachers have not had an across-the-board raise since the 2008 session, just before the Republican Party gained a 26-22 majority control of the Oklahoma State Senate.

Over the past eight years, there have been a number of discussions about the need to fairly compensate the state’s teachers. Those discussions have become more frequent as our teachers lose purchasing power and Oklahoma’s salary scale is eclipsed by the scale in other states, but lawmakers continued to cut income taxes and gross production taxes and did not prioritize teacher pay during that time period. When the budget for the fiscal year ending June 30, 2016, was approved in May 2015, it did not include raises for educators.

According to a May 27, 2016, Oklahoma Watch article, Oklahoma’s teacher pay, including health insurance and retirement benefits ranked 49th among the states and the District of Columbia. Only Mississippi and South Dakota compensated teachers less than did Oklahoma.

That same article reported that in the early days of the 2016 legislative session, both the governor and the state superintendent of schools floated out the idea of raising teacher salaries $3,000 to $5,000 per year and that at least six bills were introduced to boost teacher pay.

Unfortunately, anti-public education forces blocked all attempts to increase teacher salaries in Oklahoma and when the 2016 legislative session came to an end in May, the budget for the fiscal year ending June 30, 2017 still provided no relief to teachers, even though both Mississippi and South Dakota lawmakers raised their teachers out of last place by granting them generous salary increases.

While anti-public school forces continued in their efforts to cut taxes, the state suffered two revenue failures this spring and money budgeted in 2015 was cut from DHS and social services and roads and education as a result of declining tax revenue.

After the 2016 Legislature went home, the Fallin Administration discovered that the across-the-board cuts had been more severe than necessary and the miscalculation resulted in a $140 million account and the money was burning a hole in some people’s pockets. Then the pandering began.

The governor announced that it should be used for teachers’ raises. One legislator wanted it used to fund a raise for all state employees. Many other legislators who had turned a blind eye to teacher compensation during the budget process jumped on.

These panderers did not consider the reality that this “surplus” was not a surplus at all. It was money that had been appropriated in 2015 to state agencies and been cut during the fiscal year when tax revenues “inexplicably” dropped. This was not a new revenue stream and the daily cost of the special session that would have to be called to redirect these “one time monies” to raises would be roughly equivalent to the salary of a beginning teacher.

Weighing in also were conservative pundits like the Oklahoma Council for Public Affairs and the Daily Oklahoman who have seen poll numbers showing that Oklahomans want teachers fairly compensated and who are in the 11th hour running out of options to defeat the one penny sales tax for public education. Those anti-public education forces would like nothing more than the one-time funds to be used to give teachers a pittance of a raise just before the vote on SQ 779. They would then argue that the small raise nullifies the need for 779 and they don’t want us to remember that there will be no money to fund the meager raises next year.

An appropriate translation of the ending of Hamlet’s soliloquy is, “Thinking about it makes cowards of us all. It follows that one’s first impulse is obscured by reflecting on it and great and important plans are diluted to the point where we don’t do anything.”

Everyone agrees that a extra penny sales tax is regressive and is not the best way to fund public education, but because the anti-public education lobby has persisted in gutting Oklahoma’s revenue and because the Oklahoma legislature shows cowardice in the face of that powerful lobby, the people’s initiative petition allows voters to courageously speak in the only way that they can to protect the future of Oklahoma’s children.