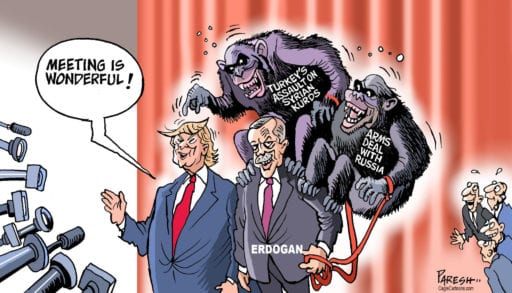 Last week, just over a month after disgracefully abandoning our Kurdish allies to Turkish terror, President Donald Trump held a love-fest at the White House for Turkish President Recep Tayyip Erdogan, with select Senate Republicans on hand to slobber at the feet of the blood-stained dictator.

Yes, our president of “great and unmatched wisdom” – who sent a letter threatening  to “totally destroy and obliterate the Economy of Turkey” if the Turks took advantage of his retreat from responsibility in Syria to attack and persecute the Kurds – welcomed Erdogan with open arms while the Kurdish are still being destroyed.

And he further accepted a personal insult from the Turkish leader who threw Trump’s bellicose letter back at him to start the meeting.

Laura Kelly reported for The Hill, “Turkish media are seizing on President Recep Tayyip Erdogan’s comments that President Trump had ‘no reaction’ to his returning the American leader’s notorious letter to him, saying it shows a clear victory over Trump.

“A headline in Sabah Daily, a pro-government media outlet, said that international media were reporting that Erdogan returned the ‘scandalous’ letter to Trump and the American president was ‘silent.’”

Trump has yet to meet a dictator he doesn’t like, but Huffington Post did remind us recently of what motivates “our very stable genius” by reprinting a Trump interview with Breitbart News in December 2015.

Asked about how he would handle the Turkey/Syria situation, candidate Trump admitted, “‘I have a little conflict of interest ’cause I have a major, major building in Istanbul,’ Trump boasted in response.

“‘It’s a tremendously successful job. It’s called Trump Towers – two towers, instead of one, not the usual one; it’s two. And I’ve gotten to know Turkey very well. They’re amazing people, they’re incredible people. They have a strong leader.’”

Following the announcement of the American desertion, a National Security Council source told Newsweek, “President Trump was definitely out-negotiated and only endorsed the troop withdrawal to make it look like we are getting something – but we are not getting something. The U.S. national security has entered a state of increased danger for decades to come because the president has no spine and that’s the bottom line.”

And last week that “strong leader” played a homemade, anti-Kurdish video on an iPad at his White House celebration, depicting our former allies – the same Kurds who supplied the intelligence that allowed us to track down the ISIS leader – as terrorists.

Among those watching was Sen. Lindsey Graham, who on Oct. 9, called our abandonment of the Kurds as “shameless.”

Well, if anyone knows shamelessness, it must be the senator from South Carolina. During the press conference following Trump’s official capitulation, our president asked for a question from the Turkish press, preferably a favorable one. Graham snickered, “They’re the only ones who are left” – a joking acknowledgement of Erdogan’s repression of any opposing voices inside Turkey.

As reported by Amnesty International on Nov. 1: “As the tanks rolled across the Syrian border, the government took the opportunity to launch a domestic campaign to eradicate dissenting opinions from media, social media and the streets. Critical discussion on issues of Kurdish rights and politics has become even further off limits,” said Amnesty International’s Europe Director Marie Struthers.

Talk about a man after Trump’s own heart – however small and shriveled it must be.

And Sen. Graham, defender of the Kurds?

After what Graham claimed was a heated discussion with Erdogan, Daily Kos’s Laura Clawson noted, ”But apparently Graham came out of that exchange convinced that the way to prevent Turkey from a Kurdish genocide is to protect the country from consequences for a century-old genocide committed not by the Republic of Turkey but by its predecessor, the Ottoman Empire.”

Kelly’s article for The Hill gave the Turkish assessment of Sen. Graham: “One headline in Turkey’s Hurriyet Daily quoted the Turkish leader talking about Sen. Lindsey Graham: ‘I told him what he needed, he learned his lesson.’”

It should be hard to deny the Armenian Genocide, since that slaughter was the prime example used by the man who coined the term “genocide.”

The House had approved the resolution 405-11, with former history professor Tom Cole, whose own ancestors were marched down a genocidal Trail of Tears, among the 11 voting against truth, justice and the American way.

It’s to be expected that the Turkish propaganda media paints Trump’s spinelessness as a victory for its dictator. But Friday’s Greek Reporter noted, “Trump bows to Erdogan again: where does this leave Greece?”

Philip Chrysopoulos laments: “Once again, Greece and Cyprus saw the American president laying down the red carpet for a leader who has repeatedly violated international law and frequently threatens neighboring countries …

“During the press conference following the meeting of the two leaders, Trump even went so far as to call Erdogan a ‘very good friend.’ These words are a great cause for concern for Greece and Cyprus, who watch Turkish aggression in the Aegean and Eastern Mediterranean continue unfettered.

Chrysopoulos’s assessment: “So the Turkish president left the White House with a bag full of gifts, courtesy of the American President, seemingly free to continue his expansionist vision.

“One wonders what would be the reasons Turkey continues to enjoy such favorable treatment from the White House.”

Surely, Mr. Chrysopoulos has heard of “Trump Towers – two towers, instead of one, not the usual one; it’s two.”

Previous article
Kiss Of Death
Next article
Extortionist In Chief