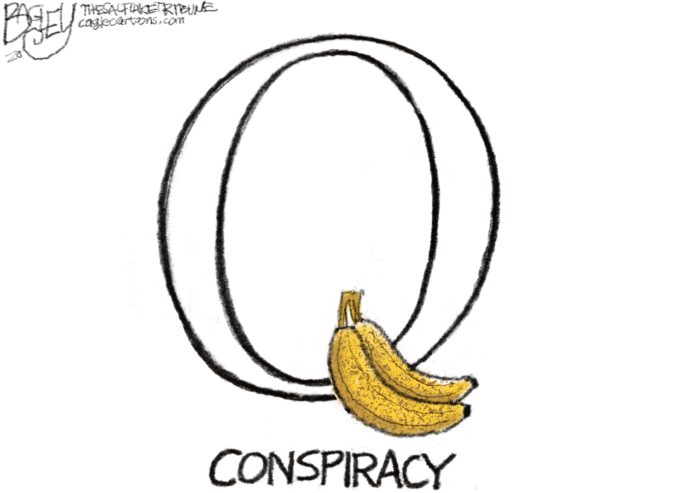 We know the Republicans became the party of racism when Nixon’s Southern Strategy recruited disenchanted Dixiecrats after the Democratic Party opened its proceedings to all people. Seeing George Wallace’s popularity in 1968 showed them a voting base that they could court with strategic code words and nudge-nudge, wink-wink hints.

For the last five years Donald Trump has made GOP racism open and unabashed, a klaxon call to rally klanazis to his side.

Republicans have always been a pro-business party, much more so after Teddy Roosevelt pulled the trust-busting progressive wing out in the 1910s.

Donald Trump’s tax cut for the rich, refusal to take action against the coronavirus pandemic in the name of profits over people and his continued plans to eliminate Social Security have made it the Wall Street Party. No subtlety here as the COVID-19 death toll moves toward 180,000 while Trump keeps calling for business as usual.

Even less subtle is the QAnon virus infecting the Party of Lincoln with outright craziness – which is now openly encouraged by Putin’s puppet.

On Aug. 12, Sanjana Karanth of Huffington Post summarized QAnon as “a movement of unsupported, far-right conspiracy theories with the belief that Trump is dismantling a ‘deep state’ cabal of liberal elites who love Satan and pedophilia.”

The attack on the Deep State is actually mainstream GOP-speak for getting rid of any qualified expert in any area of government whose knowledge, facts and training opposes their unbridled greed. Republican hatred of educated people with scruples extends to an all-out offensive against public schools by autocrats who want indoctrination not education.

From firing and silencing environmental experts and gutting their budgets to retaliating against weather experts who objected to an illegal Sharpiegate misrepresentation of life and death hurricane dangers, Trump and his enablers hate the deep thinkers of the Deep State. They’ve wrecked our foreign policy in the process.

The Deep State is not a conspiracy. It is a collection of dedicated, hard-working public servants providing a continued coherent competency to protect our interests at home and abroad regardless of which party holds the White House.

While Trump was conniving plans to stiff contractors for their work, defrauding college students with a phony university, siphoning “charity” money for his own ends and trying to bed the wives of associates, other people chose to see how they could make this country better – and safe.

The Huffington Post headline over the weekend tells us: “Trump Accuses FDA Of ‘Deep State’ Conspiracy Against Him Over COVID-19 Vaccine Testing.” Yes, it is a total conspiracy to put science over politics in the Trumpverse.

The nonsense about Satanists reminds me of the attacks against Barack Obama. When GOP attacks against his “radical” preacher failed to gain traction, Republicans went full-blown lie by declaring Obama a Muslim. [He’s not.]

Understanding little – including irony and hypocrisy – this fringe group seems not to notice that their supposed savior of enslaved children, our president, in 2002 told Cosmopolitan that he and convicted underage sex trafficker Jeffrey Epstein were “’great friends,’ who knew each other for 15 years,” according to Carmen MacBeth of Film Daily.

MacBeth continues: “According to one of Donald Trump’s aides, Trump was friends with Jeffrey Epstein and hung out with him a lot because he was rich … They were two rich men into investments in a very small pond.

“According to sources, Donald Trump and Jeffrey Epstein would be each other’s wingman at parties. They were close to each other for years, and reportedly, Epstein was the one who introduced Trump to his current wife, Melania. Then a bidding war in 2004 supposedly upended their friendship.”

Also in 2002, Trump told New York Magazine: “I’ve known Jeff for 15 years. Terrific guy. He’s a lot of fun to be with. It is even said that he likes beautiful women as much as I do, and many of them are on the younger side.”

So, here’s the guy designated by QAnon as the deliverer of young sex trade victims knowing 18 years ago about the predilection for young girls of his friend for 15 years – and who is on record making creepy lewd remarks about both of his daughters.

And the Florida prosecutor who engineered a slap on the wrist when Epstein was arrested the first time was rewarded with job in the Trump administration.

When Marjorie Taylor Greene, a “racist QAnon follower,” according to Karanth, won the Republican primary in a heavily GOP Congressional district, did our president denounce her extremist lies?

Trump tweeted, “Congratulations to future Republican Star Marjorie Taylor Greene on a big Congressional primary win in Georgia against a very tough and smart opponent. Marjorie is strong on everything and never gives up – a real WINNER!”

Karanth added: “Greene came under fire earlier this year after reports tying her to an anti-government militia leader and to a longtime member of the white power movement. In June, Politico reported on Greene’s history of racist, anti-Muslim and anti-Semitic remarks that led the House’s high-ranking Republicans to denounce her and her association with the party.”

Unlike Joe Biden, who disassociates himself from our party wackos and disavows their views, Trump, of the birther conspiracy lies himself, endorses those of the GOP.

He did so earlier when Dr. Rich McCormick outright won another House nomination in Georgia after appearing “on a live-streamed YouTube program that is part of QAnon hub Patriots’ Soapbox in order to promote racist and anti-Semitic conspiracy theories. He’s also promoted coronavirus misinformation in popular QAnon circles, a dangerous tactic from someone who is an emergency room physician by profession,” Karanth wrote.

And what did our Twit-in-Chief tweet? “Congratulations to Dr. Rich McCormick on a BIG WIN in Georgia last night! We need you in Washington, D.C. badly. You have my Complete and Total Endorsement!”

The Huffington Post reported last week that, when asked specifically about QAnon, Trump said, “I don’t know much about the movement, other than I understand they like me very much, which I appreciate. I have heard that it is gaining in popularity … I’ve heard these are people that love our country.”

So, fresh off an endorsement from a president susceptible to flattery and lies, QAnon scheduled more than 200 rallies across the country over the weekend.

Most USAnians are middle-of the-roaders. Both parties used to cultivate this moderation. Today, blindly following the lying conspiracy promoter leading their party, many Republicans have abandoned the middle in hopes that the threat from their violent far right bullies can cower others into supporting craziness and the crazy who leads them.

Heck, they’ve even abandoned any pretext of principles since the GOP party platform says mainly that anything Trump says and does is fine. We now have one political party and one cult.