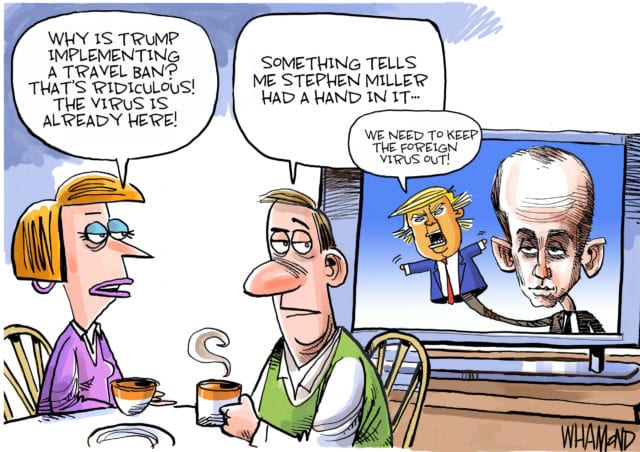 Is Joe Biden president yet?

Biden certainly sounded like the commander in chief on Thursday morning when he addressed the pandemic crisis in a sobering televised speech. Calmly yet firmly, he called the American people to action, proposed a substantive and detailed plan to mitigate the new coronavirus outbreak, and promised to protect the nation from future threats in cooperation with our overseas allies.

If his words lacked the emotive power of a Barack Obama or Bill Clinton, the former vice president was more than adequate to the moment – especially in contrast to the wretched performance of the actual president the prior evening. Even Donald Trump must have realized that his flat, monotonous, seemingly spooked reading of the teleprompter had failed to reassure the country, when markets reacted with another record-breaking decline.

Drafted by his kooky xenophobic aide Stephen Miller, Trump’s speech struck an immediately discordant tone. When he referred to “a foreign virus,” the president echoed moldy tropes of bigotry, dating from the Dark Ages, when fearful monarchs blamed the outbreak of the plague on Jews and other “foreign” influences. His announced policy initiative – to curtail travel between Europe and the United States – embodied that backward worldview without much likelihood of reducing infections or saving lives.

No doubt Trump meant to “reset” his ruinous approach to the pandemic, realizing that continuing failure will inevitably mean his ejection from office in November. He needed a major adjustment after weeks of downplaying and distorting the coronavirus threat and encouraging his idiot supporters to depict it as a “hoax.” But his speech – devoid of serious proposals to avert catastrophe – only emphasized how poorly he and his cohort are serving the nation.

Minutes after the telecast ended, various Trump minions realized that he had just uttered several damaging falsehoods. Could they have been surprised? He said that all travel between the U.S. and Europe would be halted, when, in fact, the restrictions only apply to foreign citizens. [Permanent residents and their spouses will also be exempted.] He indicated that all imports and exports would be stopped, although only people and not goods are affected. And he claimed that he had persuaded health insurance executives to waive all payments for coronavirus coverage, when they had actually only agreed to cover testing without charge, not treatment.

Such boobery is depressingly familiar to a nation that suffers Trump’s misstatements and outright lies every day. But this is not what is supposed to happen in an Oval Office speech. And it is not what would happen in a normal presidency, where a speech of that gravity is subject to the most careful composition and checking. It is what happens, however, when a puffed-up tyro like Jared Kushner is running the White House.

The arrant stupidity of the speech’s main point is obvious, except to the Trump mindset. Even if restricting inbound travel might reduce the number of infected people entering our borders, any such policy must be enacted only in consultation with the European Union and its leading member states. A global pandemic requires global cooperation, not “America First” posturing.

The most glaring omission from Trump’s speech was any acknowledgment that coronavirus testing is central to a national mitigation strategy. But the president couldn’t talk about testing because his administration has failed to ensure that tests are available in the tens of millions, as needed.

What Biden proposed, by contrast, was not only a rapid expansion of testing but also a whole series of policy actions that would prepare us against the worst. In addition to ramping up test production in both the public and private sectors, the Democratic front-runner laid out a plan for mobile test facilities; the deployment of military medical personnel and equipment; accelerated training and development of treatments and vaccines; and much more to deal with future threats as well as the current crisis.

Biden’s entire plan is well worth perusing [joebiden.com/covid19/]. It provides an instant sense of how deeply his team understands government and how federal authorities can respond to a national emergency. He oversaw the Obama administration’s successful response to previous pandemic threats and is surrounded by capable veterans of government. The broad knowledge they possess is “foreign” to the Trump crew and their Republican cronies in Congress, whose ideological disdain for government is so dangerous.

As the Democratic candidates cancel political rallies in accordance with guidelines concerning crowded events, voters may wonder how America will conduct national conventions and even the November election. It’s too bad that we can’t move the election up by several months, rid ourselves of these clownish officeholders and inaugurate a government that works.

Until then, God bless America, because we really need it.