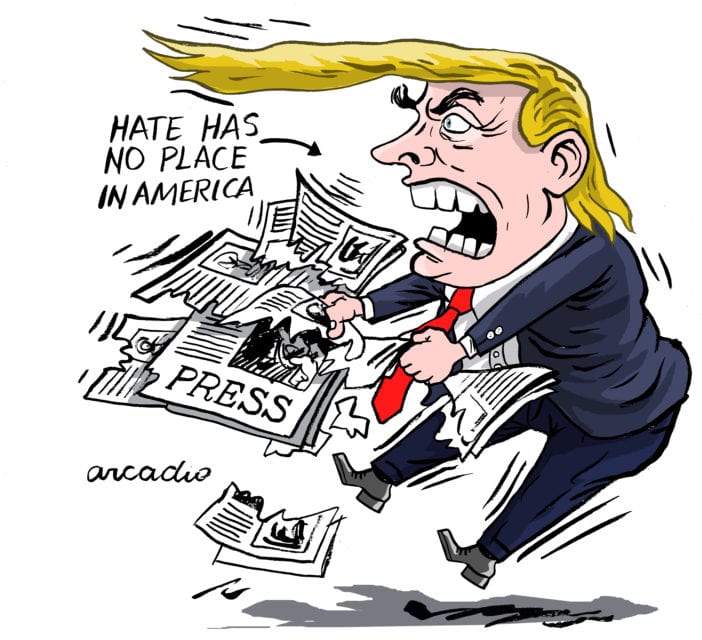 A 14-year-old Michigan boy “may be facing criminal charges after admitting he wanted to kill several students and teachers at his school in Pontiac, said the Oakland County Sheriff’s Office.”

Further investigation led to the boy being placed in custody.

Got to get these dangerous kids off the streets.

But if frustrated teens fantasizing about lashing out the world they can’t understand are taken off the streets for hit lists and violent journal drawings, why has there been no arrest of whomever is responsible for what Huffington Post describes as “a graphic video featuring a fake President Donald Trump stabbing members of the news media and lighting the head of a political rival on fire,” which was aired during a pro-Trump rally at Trump National Doral in Miami over the weekend?

American Priority, host of the event, disavowed any responsibility. The White House said Monday that the president had yet to see it though he has re-tweeted other violent, fake videos showing him attacking opponents.” Don Jr. was among those at the gathering.

“In the video,” according to HuffPost, “a man with Trump’s superimposed face goes on a violent and bloody rampage inside what’s called the ‘Church of Fake News.’

“The figure can be seen walking in the church as other people with logos over their heads from a bevy of news outlets – including PBS, NPR, HuffPost and The Washington Post – sit in the pews. The Trump-like figure then pulls out a gun and opens fire on the media outlets. Other fake versions of political and media figures are then attacked in the clip, including former FBI Director James Comey, MSNBC’s Rachel Maddow, Rep. Maxine Waters, D-CA, and the late Arizona Sen. John McCain.

“A likeness of Sen. Bernie Sanders, I-VT, a 2020 presidential candidate, later has his head ignited by a blowtorch.”

And not even original. NBC News reported last month reported a Republican political action committee ad that aired during the Democratic presidential debate that opened with a picture of Rep. Alexandria Ocasio-Cortez’s “face being consumed by flames.”

Never at a loss of words [or ideas], Rep. Ocasio-Cortez observed, “What you just watched was a love letter to the GOP’s white supremacist base.”

Mr. Trump’s public Christian, evanyellical supporters, who regularly condemn video games and the movies for irresponsibly promoting violence, must be too busy planning their Trumpista civil war to have noticed this latest incitement to violence.

Of course, the video games and movies depict fictitious characters not the enemies of fascism. Then, too, these same moral beacons manage to ignore, deny or defend the ethnic cleansing rampant throughout the Old Testament.

Worse, for the Trumpistas, condemning vivid depictions of violence against the press and Democrats might lead toward that slippery slope of questioning presidential rhetoric that advocates and defends the same actions.