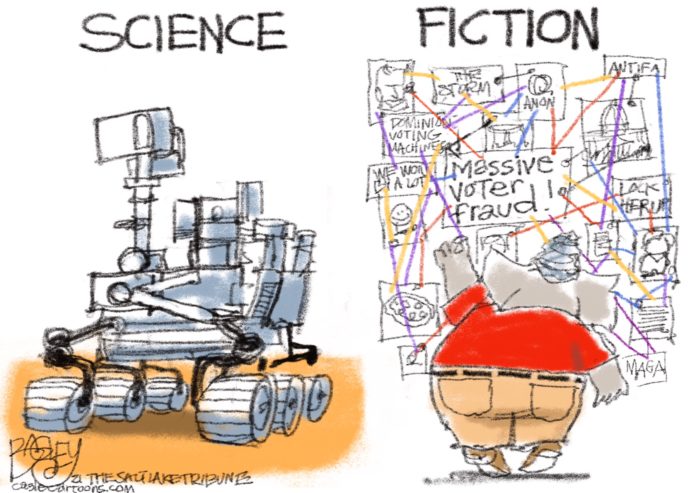 I got up early last week to watch the Ingenuity helicopter’s first flight on Mars. A mere 184.46 million miles away, Ingenuity sat on the Martian surface awaiting commands from the control room full of bright young faces at the Jet Propulsion Lab. Then, it responded:

Up, but not too high, then down. Flying around on Mars. We are capable of much if we put our minds to it – especially our scientifically-trained, discipline-honed minds. We usually rely upon them to the point of taking them for granted.

Some energy companies have had so much faith in the findings of their scientists that when, in the 1970s, their own scientists first predicted the coming global warming that we are now experiencing, they took action.

No, not the responsible action to try to mitigate their negative impacts. They opted for expensive disinformation campaigns to discredit what they knew to be true before the rest of us. They took this action because they believed the findings of their educated, trained and dedicated scientists.

So, science is fine as long as it precipitates increased profits, something to be disparaged if it threatens the corporate nickel.

Listen to the scientists: global warming is real. It is leading us toward climate chaos – to borrow the terminology of my tree-hugging pal Jim Bush.

During the 19th century, one of every seven people in the United States and Europe died of tuberculosis. “Consumptives” were staples in Russian novels. Doc Holliday was the most famous “lunger” in the U.S. One of the great 20th century novels, Thomas Mann’s The Magic Mountain, deals with life and treatments at an Alpine sanatorium.

I worked with a man from my parents’ generation who had spent time in his youth in Denver at one of its two famous Jewish hospitals dedicated to treating TB patients.

It was a scourge that still persists elsewhere, but medical science isolated the bacterium responsible and developed a vaccine that has rendered it nearly extinct in the U.S.

I was in the first generation to receive a vaccine to prevent the polio that struck Franklin Roosevelt in midlife. Most victims were children, and I have known two contemporaries not as fortunate as I was. But medical science has defeated polio, too.

Sharpening my double-headed axe two years ago, I got my hand a bit too close to a blade. Down to the clinic for my tetanus booster shot. Of course, its vaccine is part of the DTaP [diphtheria, tetanus and pertussis – whooping cough] vaccine administered to infants with caring parents.

Smallpox: that scourge of history? My left shoulder scare has never been as prominent as some, but my generation had them. Not a case worldwide since 1980.

Scientists working to improve our health have also come up with vaccines to reduce the dangers of hepatitis A & B, rubella, measles, mumps and chickenpox. And every year, they try to calculate which influenza strain is likely to predominate to protect us against that.

Medical science can work wonders for those with sense enough to take advantage of it.

But, again, there were greedheads and blowhards who saw science as a threat to corporate profits and personal power. They lied about the disease, disregarded this country’s highest death rate in the world, skewed some statistics to try to hide the results of their evil and then tried to discredit the medical scientists and their doctor spokespeople.

Remember, scientists are totally credible when it comes to making money.

And speaking of science and scientists and facts. Scientists constructing the human genome have confirmed that we are all of one race, the unirace. But how wise really is Homo sapiens if some member disregard the science and cling to hateful, bigoted, racist nonsense?

Maybe that’s why the bigot brigade is largely anti-education. First, equitable educational opportunities put the lie to their delusions of superiority. Secondly, an educated populace would make them as irrelevant as smallpox.

We’re all cousins here. How do I know? The scientists tell us so.