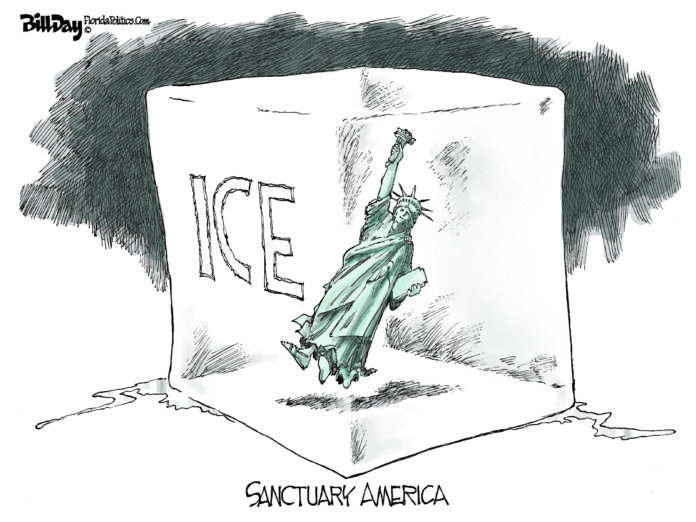 Emotions ran high at the Ray Jordan Tulsa County Administration Building on May 26 as the Tulsa County Commissioners voted to renew a measure – 287(g) – that allows local authorities to hand over undocumented immigrants to Immigration and Customs Enforcement [ICE] for deportation.

A group of activists associated with the New Sanctuary group, which advocates for immigrant rights, was there to voice their opposition to 287(g), which they say is part of a discriminatory and inhumane system.

New Sanctuary coordinator Linda Allegro stated that “COVID-19 has shown us how immigrant workers are essential to our economy – from their role as farmers, laborers and health care workers. 287(g) is a mechanism of control and punishment. The city of Tulsa and its mayor has talked a lot about equity and inclusion, but 287(g) doesn’t advance that. It is not a good look for Tulsa county.”

Mimi Hernandez, an educator at Tulsa Tech, followed by stating that 287(g) and other anti-immigrant bills “affect the performance of students she works with,” as many live in “fear that their parents are not going to be there when they come home.”

Another speaker opposing the bill, Bob Ritz, author of the 2012 book Immigration Reform: Here They are Ready or Not, said that undocumented immigrants falling under 287(g) cannot post bond and “are held for weeks or months [until their criminal case is resolved] at a high taxpayer expense” – which may be as high as $100,000 a year, though that has never properly been studied.

Ritz asked: “How can the county commissioners renew the contract without knowing the actual cost of the contract?”

Activist Chris Shoaf asked the county commissioners to further consider people wrongly arrested. Research he had undertaken showed that 21% of people transferred under 287(g) had their charges dismissed. Many others were arrested also for misdemeanor offenses or traffic violations.

Sheriff Vic Regalado took to the podium after the activists and asked them whether they would like to take the people who faced charges into their own homes. He said that the majority were charged with terrible crimes, including murder in the first degree, human trafficking, assault and battery of a police officer and heroin smuggling. The least serious crime was DUI that caused an accident.

Regalado further stated that he was in close contact with the Hispanic community and that most of the crimes were committed not in the affluent but in the impoverished neighborhoods [where Hispanics live]. “It was silly to mix criminals with people who came here to work hard.”

Following the speeches, two of the three county commissioners – Stan Salise and Ron Peters – voted to renew 287(g) and the meeting was adjourned. Only Commissioner Karen Keith voted against.

Many of the activists’ left unsatisfied at the lack of consideration for their views and felt that Regalado had his facts wrong. 287(g) generally represents an important lightning rod for deeper fissures over the immigration issue and outcry surrounding the cruelty of the current system.

Often forgotten are some of the misguided U.S. foreign policies – including the North American Free Trade Agreement [NAFTA], and U.S. backed wars and coups in Central America – that prompted many people to migrate.

When law enforcement becomes the enemy, and people are left living in fear, America takes on the appearance of a police state, and the country’s founding ideals are betrayed yet again.

Editor’s Note: This report was updated to reflect that 287(g) was renewed by a 2-1 vote with Commissioner Karen Keith voting against.